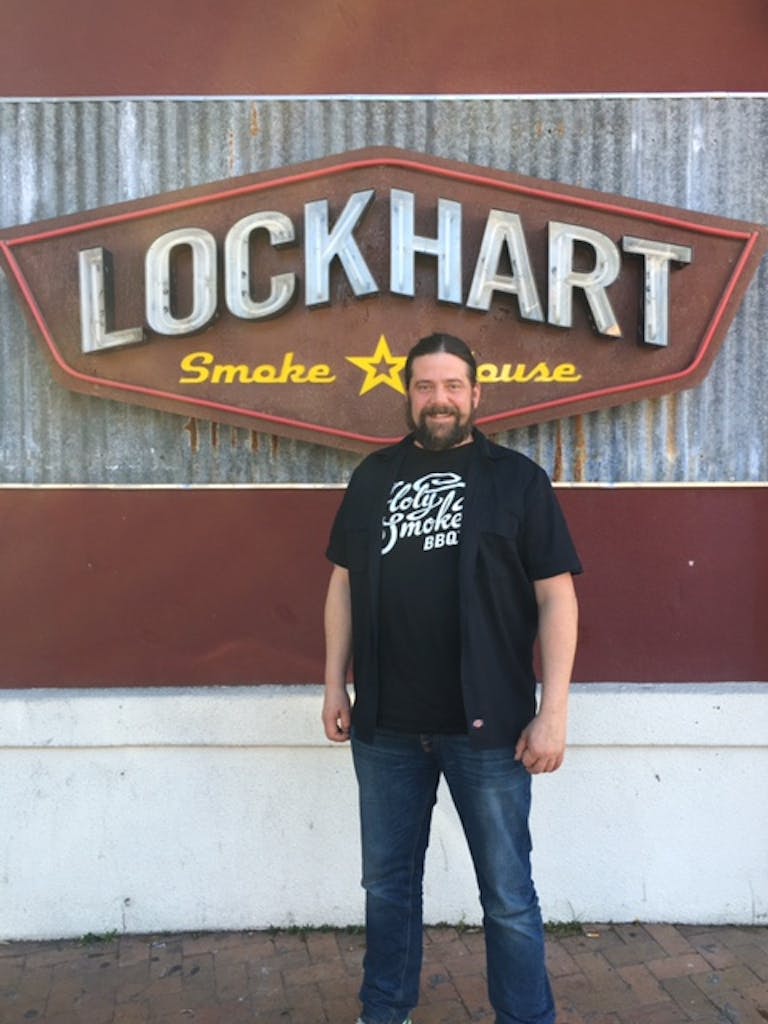 Swedes love to grill, but low-and-slow, Texas-style barbecue is a concept so foreign that only one restaurant in the country serves it. They opened in 2014 when Johan Fritzell turned his passion into a rural barbecue stop in a field in southwestern Sweden, one and a half hours north of Copenhagen.

Holy Smoke BBQ is a restaurant as well as a smoker dealer, serving as a vendor for Myron Mixon smokers and Big Green Eggs for budding barbecuers from Copenhagen to Budapest. The restaurant itself is open only for six months out of the year because of Sweden’s brutal winters, but that leaves months open for barbecue exploration, which brought Fritzell to Texas this past weekend.

This was Fritzell’s third barbecue trip to the state in as many years. We met up in Dallas at Lockhart Smokehouse for some barbecue recon, and talked over the upcoming barbecue itinerary. We also discussed the budding barbecue culture in his country that, thanks to Sweden’s love for America, only looks to expand. “We are the most Americanized country outside of America,” Fritzell says. He’s sure the country will embrace American barbecue too.

Daniel Vaughn: When did you start cooking barbecue?

Johan Fritzell: I started barbecuing something like five years ago. I’m 43 now, about to turn 44. Instead of buying a Porsche when I turned 40 I bought a big ass smoker, and I’ll buy a Ferrari when I’m 45. That was the plan anyway.

DV: What kind of smoker did you buy?

JF: I bought a big flat rack smoker from Myron Mixon based on the fact that I’ve been using Weber Smokey Mountains. I have two of those, I like the waterpan. The Myron Mixon smokers also come with a lot of rack space. I bought one 72 inch and one 48 inch without having a real plan. I felt something good must come out of this.

DV: What did you start out cooking on the Weber Smokey Mountains?

JF: Shoulders and ribs. At that time there was nowhere to get barbecue beef products in Sweden. You still can’t. You have to import them from the U.S.

DV: Where do you import your beef from?

JF: We buy our meat from Creekstone Farms.

DV: You have cattle in Sweden, just not the right kind?

JF: We have lots of dairy cows. We’re good at milk, but not so good at beef.

DV: What is the main protein source in Sweden? Seafood?

DV: When did you first cook a brisket?

JF: It was about three years ago. We managed to source it through one of our normal suppliers. We don’t import the meat directly ourselves.

DV: When you first cooked that brisket, was the restaurant already going?

JF: Nope. The restaurant wasn’t supposed to happen quite like that. We were just supposed to have some kind of small production units. About three years ago there was a wave of sous vide cooked products. Where the pulled pork was like an icebreaker, it went in everywhere.

DV: It was low and slow, but without the smoke.

JF: Yes. You put it in a plastic bag and add some spices. It would definitely get tender.

DV: Would people market that as barbecue in Sweden?

DV: Is it still a popular barbecue dish to serve?

JF: Yes. They pull everything. Chicken, pork, and beef.

DV: So, cook the hell out of it and then pull it, huh?

JF: It’s boiled in a bag. It’s precooked in the factory before it gets to the store. You can take it home and put it in the microwave.

DV: Are there restaurants that serve this?

DV: What made you decide to choose fire over boil in a bag?

JF: I just thought that it was a shame. Pulled pork might not be my favorite barbecue, but it’s still way better than the sous vide product, so I decided to do something about it. That’s when I bought the smokers without having a masterplan. We started a small production facility doing catering, we were also cooking for restaurants. We built it with shipping containers. I was there all the time, it takes time to do it properly, so after a while people started to come by and ask “What’s going on here?” This is Sweden, so nobody has really seen a smoker. It sounds crazy to you, but we were pioneers in this field.

DV: Did they think the building was on fire?

JF: No. I think it was the delicious smell. They followed their nose. We couldn’t serve them anything, but at some point we thought we should ask permission to sell it legally. The county where we lived said, “Go ahead.” Then we decided to open a meat shop. By that time we had the brisket and beef ribs, we wondered how we would sell product for a hefty amount of money to people who didn’t know what it was, so we thought we should make sandwiches. We opened by the end of July. There was no advertising or any signs. There was something like seventy or eighty people showing up on Saturday. By that time I’d been to Texas and seen the model of open before lunch then sold out when it’s gone. That seemed like a sane approach to me.

DV: Did you have anywhere for them to sit?

JF: At that time there were small tables. Maybe about thirty seats under a small tin roof. We were blown away by seeing all these people. They were like “Wow!” I know it’s hard to imagine, but these people had never had wood-smoked barbecue. It didn’t exist. People were enjoying it. The first weekend we opened a group of guys said “Hey, we want some beer with this.” Of course. I went back to the town hall for permission to sell beer. “Of course you can sell beer, but you need to have a restaurant to sell beer. You can’t just be a sandwich shop.” We came up with a menu. That was in 2014.

DV: That’s when you became an actual restaurant?

JF: Yeah. Something like that. We closed at the end of September. We’re in Sweden so it gets cold.

DV: How many months are you open?

JF: Six months. We’ll reopen on Good Friday, March 25. We came back last year and rebuilt the shack and made it twice as big. We bought another rotisserie from Myron and we bought a trailer. The opening weekend we had 1,800 people there, which was more than the entire year before.

DV: You started as a sandwich shop, so what’s on the menu now?

JF: There’s always brisket, short ribs, [pork] shoulder, and some kind of pork ribs. We take the ribs from the sows. Swedish pigs are lean and small, so we use sows that are a bit bigger. We also use a bit of Spanish Iberico ribs.

DV: Iberico spare ribs? When do those come on the menu?

JF: We have them most of the time. For some reason…I’m not going to talk about this because then they’re going to skyrocket.

DV: What kind of wood do you smoke with in Sweden?

JF: We don’t classify it like that, but as far as I understand, it’s white oak. We do import some hickory from the U.S. as well.

DV: I’m guessing it wasn’t hard to convince Swedes to eat smoked foods. You have a long tradition of eating smoked foods, right?

JF: We have a long tradition of preserving food by smoking, but that’s at lower temperatures.

JF: We call it hot smoking, but it’s still under 180 degrees. We smoke a lot of stuff.

DV: Do you do any of that type of smoking for the restaurant?

JF: We have a guy out there who resides in our facility. He has a charcuterie, so he does lots of sausage and other products. Those are smoked on lower temps.

DV: What about grilling? Is it popular in Sweden?

JF: Grilling is like a national sport. Everybody grills, even all year round. For some reason, we were the first place to do this on this scale. It’s the only true barbecue establishment.

DV: Is this whole tour about finding ways to expand your menu?

JF: I’ve made a few trips to Central Texas. The first trip was three years ago. It was before we bought the big smokers. Last year we came back again. This is third of these barbecue crusades where we look and learn and meet nice people. We’ve gotten our inspiration from here, but it was time for us to open our eyes even more. That’s why we wanted to see the differences in the whole hogs of the Carolinas, to the sweetness of St. Louis, and the tomato-based sauce in Kansas City. 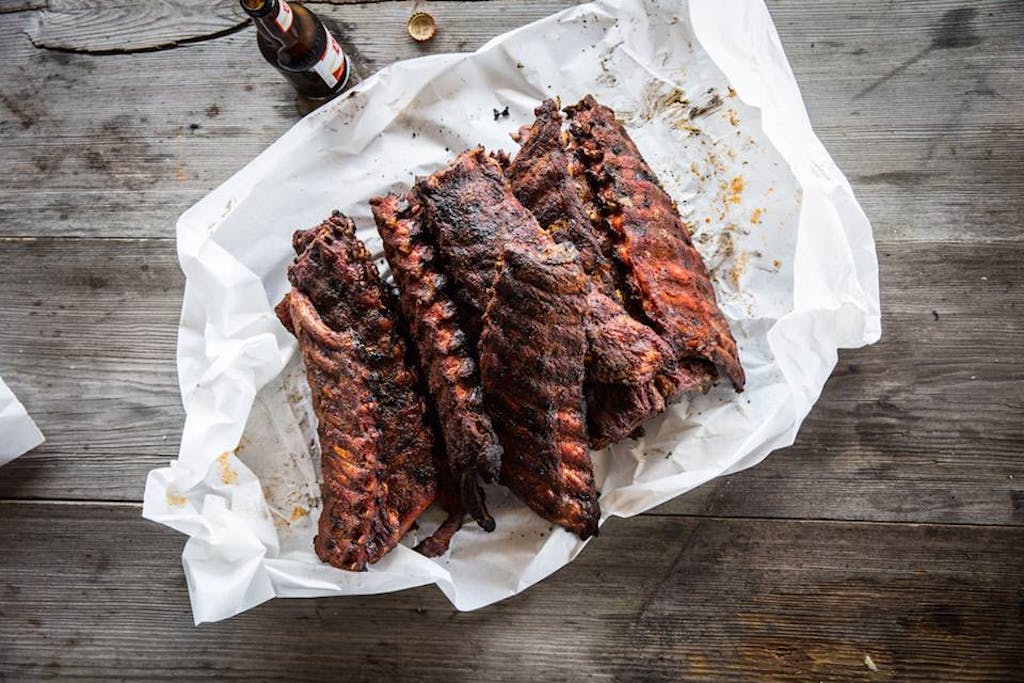 DV: You keep talking about sauces. Is that because the meat wasn’t any good?

JF: [Laughs and takes a swig of beer].

DV: I won’t make you answer that. When did this current trip start?

JF: Thursday morning in Washington, D.C. We drove to the Carolinas and into Charleston. After that went to Atlanta, then to Birmingham, Alabama to have some chicken and white sauce. We stopped in Nashville, then up to Owensboro, Kentucky, Seventeenth Street in Illinois, then St. Louis, and Kansas City. We’re in Dallas now, then Austin. We’re hitting the New York area starting Monday.

DV: Is there a better chance of chicken and white sauce or mutton making it onto the menu?

DV: What other menu ideas will you be bringing back with you?

JF: We’re reloading now. This trip will help us make quite a few decisions. We’ll for sure have something with vinegar, with a high acidity for the hogs. I love it. I’m not so sure about the tomato-based Kansas City stuff. I don’t like the sweet sauces, but that’s just me.

DV: You’re planning some events this year as well, correct?

JF: Since we’re the ambassadors for Texas barbecue in Sweden, so we fly over American pitmasters over and have cooking classes. We started last year with a guy from Midland named Junior Urias. He’s from Up in Smoke BBQ. People appreciated it a lot, so for this year we’re bringing in Myron Mixon for a class.

DV: Texas barbecue books are big in Sweden too, right?

JF: We have a fantastic Swedish author, Jonas Cramby who wrote a book called Texas BBQ, which is a good introduction to the subject. Aaron Franklin’s book was released in Swedish in the summer.

DV: When does your book come out?

JF: We’ll see about that [laughing].