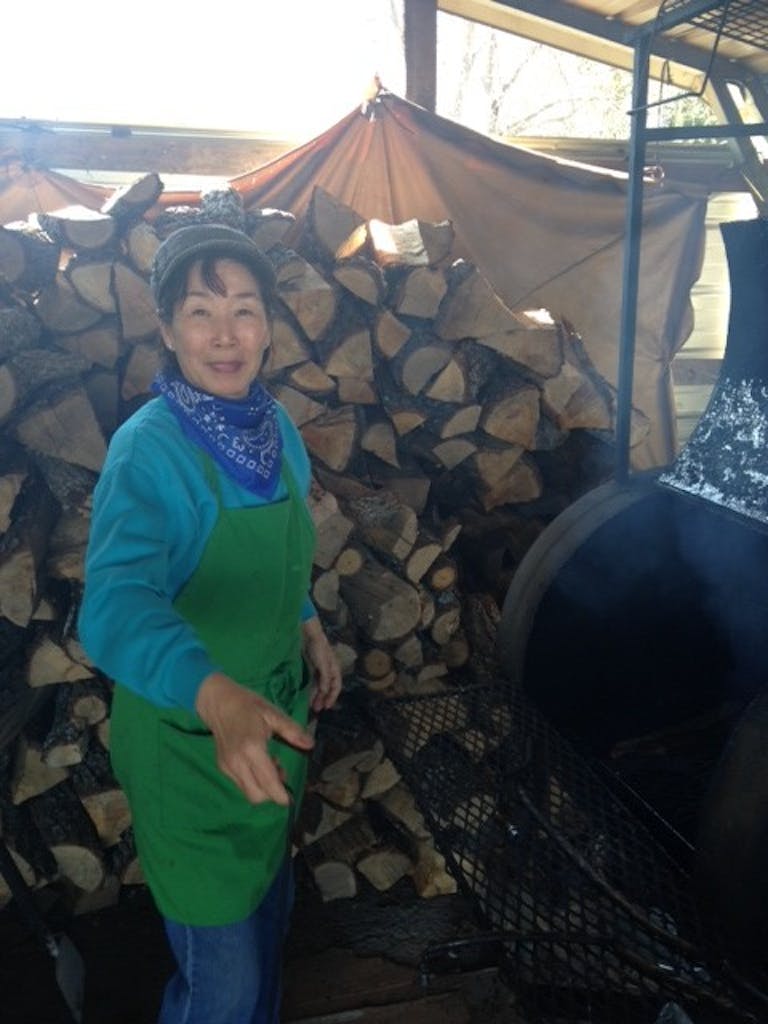 Kim Dunn learned to cook in her native Korea before she left in 1978. She then got her training in Louisiana cuisine by working at Popeye’s before shifting over to Texas barbecue as an owner of Colter’s BBQ locations within military bases. She retired from the corporate food world and decided to open a small barbecue joint that featured homemade food. She brought in her Cajun food skills along with Korean and Texas barbecue. That first restaurant opened in 2006 in Belton before she decided to move to Temple in 2010. Now she has a solid string of regular customers in her tiny eight table dining room, and an omnipresent smile.

Daniel Vaughn: So, running a barbecue joint is what you call a retirement plan?

Kim Dunn: Yeah. This is after retirement, to have a fun job. This gets me out of the house. You’ve gotta be active.

DV: When did you open the place?

KD: I opened here in 2010. Before, I was over in Belton along I-35. It was Pit Stop Bar-B-Q. I wanted it to be small. I’ve done the big stuff where you feed a lot of soldiers. I wanted all this to be homemade and make a little money. It’s a fun job.

DV: Have long have you been in barbecue?

KD: I retired in 2006, but I’ve been in barbecue since 2002. I worked at Popeye’s before that. I’m certified in barbecue by Colter’s BBQ out of Dallas. I used to manage the one in Fort Hood. That’s how I learned about barbecue.

DV: What about the Korean short ribs?

KD: Those I know because of my nationality. I know how to marinate and cook those. Actual Texas barbecue, that’s what I had to go to school for. I had to learn the whole restaurant before we opened up on base.  We had one in Japan, one in Germany, one in Las Vegas…lots of the big military bases had a Colter’s BBQ in them.

DV: Are they still operating?

DV: They closed because you left?

KD: Yes. It’s my fault [laughing]. I would have bought it and kept the one in Fort Hood because it’s real Texas themed. It was good quality stuff with the black angus, we had hickory wood, it was top of the line. That’s how I started in barbecue.

DV: You really liked it, huh?

KD: Well, for homemade food, barbecue is as close as you’re gonna get.

DV: But you have more on the menu than just barbecue.

KD: You get tired of eating barbecue five days a week. I stuck some Korean food in there and some jambalaya. It gives you some options.

DV: You’ve got red beans and rice and bulgogi. What a menu. Did you learn the Cajun dishes from Popeye’s?

KD: Well, I didn’t really learn how to make them there. Everything came in a frozen tub, but once you taste it you can learn the taste. The recipes are all my own.

DV: Is everything here from your recipes?

KD: I get Chappell Hill sausage. That’s the only thing I don’t make here. Everything else is homemade. It’s good barbecue. I’m not just here to make money. I want people to have quality food where they can come sit down and eat like they would do at home. Life is too busy nowadays for people to make home cooked meals. That’s hard to find out on the road. Everything is fast food. I came from fast food, so I know how everything fast food works.

DV: How long did you work at Popeye’s?

KD: I got certified there in 1989. I was in Japan and I flew to Georgia for training, then flew back to Japan to open up a Popeye’s. It was for the Army Air Force Exchange (AAFES), but it’s now just called the Exchange.

DV: Where all have you lived?

KD: Ten years in Japan, twelve years in Germany. I’m from Korea. I married into the military.

DV: When did you leave Korea?

KD: When I was twenty-two, but now I’m old. My older son is about your age.

DV: Do you prefer the Korean side of your menu or the Texas barbecue side?

KD: I don’t really eat barbecue. I look at it every day. I eat jambalaya here or I go home and make Korean food.

DV: Did you learn to cook while you were still in Korea?

KD: Yes, but just home cooking. Not the restaurant style.

DV: Would this [galbi short ribs, rice & kimchee] be served for a normal dinner at home in Korea?

KD: It would be for special occasions, but that was back then. I don’t know about now. I haven’t been back there since 1995. We’re getting more and more westernized.

DV: At this point what do you consider your specialty here at the restaurant? The Cajun, Texan or Korean portion of the menu?

DV: I know it tastes better than Popeye’s.

KD: Food is nothing but the imagination. There are no specific rules. You combine stuff together and that becomes the rule.

DV: Your menu shows that the rules are meant to be broken. You even mix the kimchee right into the jambalaya that you’re eating there.

KD: It gives it an extra spice kick. It gives a better flavor for me and a crunchy texture. I teach my customers to eat it like that too.

DV: What do you sell most of?

KD: It depends on the weather.

DV: Do you eat other people’s barbecue?

KD: I don’t have the time. I’m here five days a week. One day off I work on the house, and the other day I go shopping for here and for home.

DV: For a long time you were in restaurants making food that you didn’t grow up with like Cajun food and Texas barbecue. Is there anything fulfilling about being able to make the foods you grew up with in Korea in a restaurant setting?

KD: Yes, but Asian food is a lot of hands-on. A lot of chopping and marinating. The ingredients themselves are more expensive. It’s more active cooking and you have to cook it fresh.

DV: How much of the regular barbecue items do you cook?

KD: I cook two briskets every day, and I cook two racks of spare ribs. Sausage is maybe three or four pounds. It’s like a gamble. There’s guesswork every day.

DV: How long do they cook?

DV: I travel a lot eating barbecue around Texas, and there aren’t many women cooking barbecue…

KD: Especially Asian women! I might be the only Asian woman doing this. When I started in Belton it was take out only. Some of the older people would look through the window and see my face, then they’d take off. I couldn’t figure out why. It wasn’t until a friend of mine came and joked about “how does a Korean know how to do Texas barbecue.” That’s when it clicked. They were probably wondering how the hell and Asian woman learned how to barbecue. That’s why we have a sign up that says “Taste It Before You Buy It.”

KD: Yes. They’re skeptical because of my ethnic background, but I accept it. I tell them I’m certified, but they don’t believe there’s a school. To be a manager I had to go to school to learn it, so I’m certified. It took me six weeks to learn it.

DV: Do you get that reaction less often here in Temple?

KD: Yes. There’s a lot of ex-military that comes here. Plus the VA Hospital is just right up the street.

DV: People in the military are less skeptical of a Korean woman cooking barbecue?

KD: Yes. I think so. But one thing you have to say is that Asians know how to use a knife. I can chop faster than a machine gun.

DV: You smoke your barbecue over indirect heat, but the beef short ribs were cooked directly over the pecan. Would you cook them like that in Korea, or would it be over charcoal?

KD: Back in Korea we would do both. In the city you use gas or charcoal. In the country we would burn down wood. I’m old fashioned. I’m an old girl.

KD: Thanks. Maybe that’s because I do barbecue.