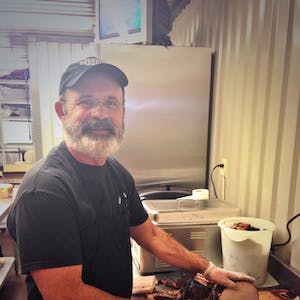 Until Anna Nicole Smith came along, the most famous area resident of Limestone County was Cynthia Ann Parker. She was abducted from Fort Parker at a young age, and her story inspired the John Wayne movie The Searchers. A decade after the 1836 massacre that led to her abduction, the Hydens settled in Limestone County.

Kirby Hyden is a third generation barbecue man in a family full of them. His brother also runs a successful joint of his own one county over. Having worked together for years, they both work from the same recipes passed down through the family. Kirby Hyden doesn’t plan to start changing things now.

We talked out beside the twin steel smokers, and one thing that has changed is how often they’re both used. It seem Hyden needs all the capacity he can get these days, so they both cook to capacity every day that Kirby’s opens. Stop by on Fridays and Saturdays for spare ribs and chicken, and don’t forget the brisket.

Daniel Vaughn: When you started out here in town you weren’t at this location, correct?

Kirby Hyden: I was right down there by the circle at Highway 84.

KH: There used to be a traffic circle in Mexia at the intersection [of Highways 14 and 84]. I don’t know why they did away with it because it was a cool thing.

DV: And now there’s a stoplight.

KH: Yes. I was just down from there when they did it and I don’t know how many wrecks they had there. I personally heard ten wrecks there in the first year while I was out tending to the meat.

DV: Is the building still there?

KH: Yes. It was at 216 Highway 14. You’ll see it. It’s kinda run down. I had leased that place for years and years. The guy I leased it from died and his wife wanted as much to lease it as I spent building this place. We were out of room down there and parking was a nightmare. This place is about three times that size.

DV: What was the name of it?

KH: That was Kirby’s too. Originally, me and my brother and I opened up down there in the eighties and it was called Hyden’s BBQ. My brother’s got a place in Teague called Hyden’s Family BBQ [since 1997]. I branched off when he went into the insurance business. I renamed it Kirby’s in 1991.

DV: Is there a healthy family rivalry?

KH: Not really. We’re buddies. He takes care of Freestone County over there, and I’ve got Limestone County. If you’re over that way, try him out. We use the same recipes.

DV: Are you originally from this area?

KH: My family comes Groesbeck right down the road, and I graduated from Groesbeck High School in ‘73. My family first came to Limestone County in 1846, so we’ve been around a long time here. That was about ten years after the trouble was over down here at the fort.

KH: Fort Parker. You’ve heard of Cynthia Ann Parker? They built the fort in 1835, and her family got massacred there in 1836. That happened about three miles down the road. My family got here about ten years after those troubles were over.

DV: Do you know if they were cooking barbecue back then?

KH: They probably were [laughing].

DV: Was it your dad or grandfather that started the family barbecue business?

KH: Originally, my mother’s dad, W. C. Holloway, built a barbecue place. The barbecue place is still standing. It’s down the road here about a mile and a half on the left. He opened that place in 1959 when he retired from the oilfield. He and my grandmother ran it for about ten years. In the seventies, my dad retired from the insurance business and opened a place in Groesbeck. That’s where I started. In 1980 is when I started cooking barbecue for a living.

DV: And you were cooking along with your dad then?

KH: Uh huh. My brother and I both worked for my dad. When dad retired we moved to Mexia and opened up there.

DV: When did you build this place?

DV: The first time I tried to find you I thought I’d driven too far. You’re a ways south of town.

KH: It’s the craziest thing. I have more trouble with people who Google my place and it shows up on the north side of town. I have a Mexia address and this is 4592 Highway 14 North. I wanna say it’s “Mexia, Texas: Where North is South.” They eventually find me. Just Google Limestone County Airport and look where all the cars are [Kirby’s is across the street from the airport].

DV: How have things changed for your business since getting into the Texas Monthly Top 50?

KH: Since I got in the magazine last year we’ve gotten a lot of business. A lot of people who wouldn’t have come otherwise. I had a guy who came from Springfield, Illinois come by this morning. He was on his way to see his son in Killeen. We’ve been on T.V. in Waco when they came over and did a story on us. We got in the Dallas Morning News and got a good write-up.

KH: I just try to do everything the same over and over again. Good barbecue is one thing, but you need to be consistent. People need to know what they’re gonna get when they come in here. We try not to slack up too much.

DV: Have you done anything other than barbecue?

KH: Oh yeah. Oilfield, worked offshore, all kinds of things when I was young. Once I started in the barbecue business in 1980 I stayed in it.

DV: What did the menu look like back then?

KH: It’s still pretty much the same as far and the brisket and stuff. We’ve added a baked potato, but basically it’s plates and sandwiches.

DV: What about that buttermilk pie. Who’s recipe is that?

KH: It was originally grandma Bessie Faye’s recipe, but Sue here has perfected it over the years.

DV: And that sauce?

DV: There’s vinegar in there and it’s a bit sweet too. What else is in there?

KH: It’s got vinegar, but if I told you the rest I’d have to kill you.

DV: I noticed the first time I ate here that you still leave some fat on the meat. Have you always served I that way?

KH: Yeah. I put a good meat rub on there. It’s my grandfather’s recipe. It’s got too have some flavor.

DV: Is that brisket what you consider your specialty?

DV: And your best seller?

DV: So you have tomorrow’s briskets on today, right?

KH: Yes. At night I’ll take them of and put them in hot-boxes. I let them stand overnight. I get back here at 4:00 in the morning to put them back on to finish them out.

DV: So how have these brisket prices been affecting you?

KH: They’ve killed me the last three months. I do IBP Selects and they’ve gotten as high as $3.49/lb. We’re just treading water on it. I charge $13.95 for the trimmed brisket. Untrimmed is $12.95. Being in the country I can’t get up too high or they might stop coming. It’s been tough.

DV: What are the other meat prices looking like?

KH: Everything is up.

KH: People think I’m filthy rich. They see all these cars out here and tell me “boy, you ain’t got enough room in your truck to haul all that money around.” I just say “yeah. Everybody needs to own them a barbecue joint. I got one I’ll sell you.”

DV: Do you try other people’s barbecue in your travels?

KH: Seldom. I’m wore out on barbecue, but I did try Hatfield’s down in Rockport last year. That’s our vacation spot. We’ll close about two weeks in July which is my vacation every year.

DV: Can a pitmaster find a way to sleep in on vacation?

KH: By the end of vacation it’s getting to where I can sleep until 8:00, but then it’s right back to reality.

DV: What do you eat when you’re not eating barbecue here?

DV: You’ve got some T.V. stars up the street at Wright’s BBQ. Did the Boss Hog show come to talk to you about being on the show?

KH: They stopped by here and I was real busy getting a catering order together. I’m kinda glad I let them go on down the road. They’ve already taken the show off the air.

DV: You two are the only barbecue joints in town. Have there been others in the recent past?

KH: There used to be a Swick’s in Groesbeck but it’s closed. They’d been around since 1973. They made good sausage. Queen’s has a place in Galveston and they opened a nice place in downtown Mexia, but it didn’t last three months.

DV: Is there another generation of Hydens to take over this place when you retire?

KH: I’ve got two daughters. One lives in Wimberley and one lives in Dallas. They have a little bit of interest, but nothing serious.