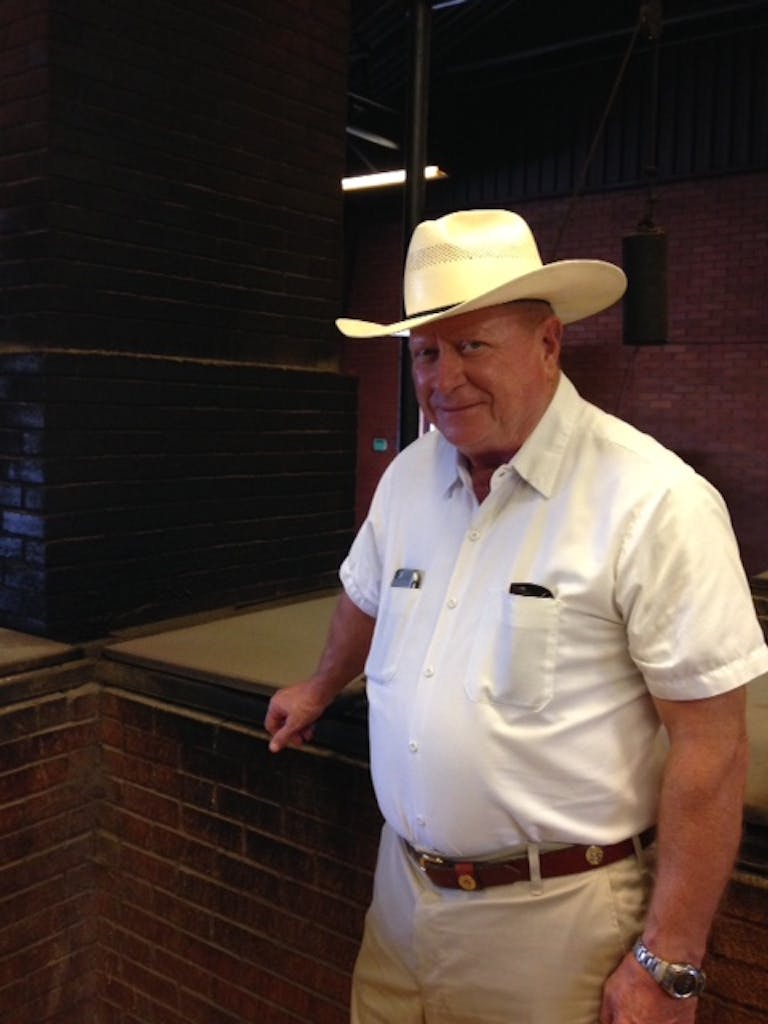 It’s the most famous family feud in Texas barbecue. A disagreement between Nina Sells and her bother Rick Schmidt caused a rift that sent the historic Kreuz Market packing. After ninety-nine years in the same building, Rick Schmidt found a new home in a new building on the north side of Lockhart. The local headlines at the time read “The Struggle for the Soul of Kreuz Market,” then “A Crisis at Kreuz Market,” and finally “A New Era for Kreuz.” A new barbecue joint also emerged. With Kreuz Market gone, Nine Sells opened Smitty’s Market in its former location. The year was 1999.

The story is generally retold in an overly simplified fashion. Something about Edgar Schmidt passing away and leaving the barbecue business to his son, and the building to his daughter, but it didn’t happen that way at all, and Rick Schmidt would like to add some candid comments to the story to fill in the details he thinks are missing.

Part I of this interview that covered the history of the original Kreuz Market ran last week.

DV: What happened in the much talked about lease negotiations that led to you moving out of the old building?

RS: Her lawyer told me that she wasn’t going to lease it to me for more than five years, and she wasn’t going to sell it to me. I had an appraisal done and offered her 10% more than the appraised value. She still didn’t sell it. I looked over at my attorney and said “what does that leave?” He said “Do you want to move in five years?” I said “If I’m gonna have to move in five years, I might as well do it now.” That’s when I called John Kelso [a reporter at the Austin American Statesman]  to tell him the story. The next day that was the headline around here. [Kelso’s story ran on 04/04/98 with the headline A Crisis at Kreuz Market].

DV: Was that the beginning of what everyone refers to as “The Feud?”

RS: Yep. They likened it to moving the Alamo.

DV: Did the disagreements all stem from back in the early eighties when she was trying to buy it?

RS: Yes. She wanted it, but she didn’t want to pay for it. She told dad “Just give it to me.” He said “I can’t give it to you. Everything I have is in this market.” The only other thing he had was his home.

DV: The story that usually gets told is that when your dad died he left the building to Nina and the business to you, but I think it’s well established that you bought the business long before that. Why didn’t you buy the building along with it?

RS: We had bought the business and when were signing the papers our attorney told us the lease was kinda sloppy. We were tired of the negotiations, so we signed it. We thought we’d be negotiating with my dad in the future. Two years later she had talked him into changing the will to leave her the building. Buying the building was our first plan, but then it blew up. Nina went to my brother’s house and told him we were stealing her inheritance.

DV: So the lease you signed with your father went through 1999? 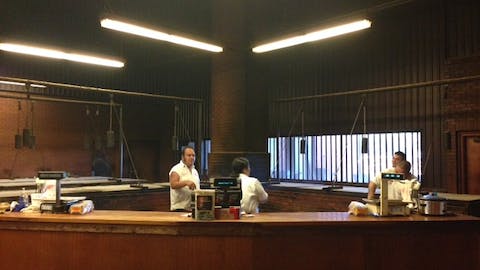 DV: When you threatened to go build a new building, was any of that a bluff that you thought would never happen?

RS: I was prepared to move, but I was bluffing a bit. When I told the press that I couldn’t lease it long term or buy it I wanted people to know that was the problem. Then her attorney told me “I can’t convince this woman what good business is.” The first renewal went up 50%. This next time it went up 125%. I was willing to do it if it was long term, and she could have gotten $80,000 a year in rent. I paid the taxes and insurance.

DV: Do you get along with your sister now?

RS: We get along just fine, we just don’t talk to each other. The best way for me to get along with my sister is just to stay out of her way, and that’s what I do.

RS: I feel like it’s older than fifteen. We had some set decorators come in here and tell me they could make this place look a hundred years old. I said, “Yeah, but everybody knows that it ain’t.” It’s getting there. 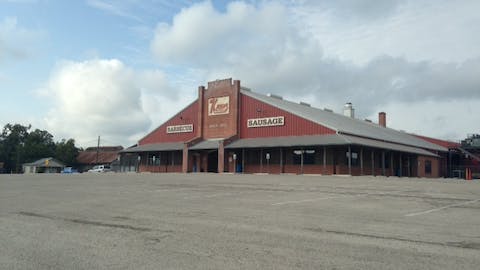 DV: What do you feel like you lost, besides the building, by moving over here?

RS: That something I get a chuckle out of. The locals here will say “Down there at Smitty’s they have those old pits, and those are seasoned. That just makes better barbecue.” I look at them and say “When you say seasoned, what part of the pit are you talking about? The firebox, the lid, the chimney, or the lining?” They jut say it’s the whole thing. I remind them that they had to replace all of that before they opened up. The inspector made them do it. I built the first pit over there [pointing to the pit room], and we put a chimney on it. I took a shoulder clod, brisket and sausage and put it on there. I bought a bunch of beer and invited my critics. They’re friends, but they all give me advice whether I ask for it or not. I cooked the meat and asked them to tell me if it was any different than downtown. They couldn’t believe it, but the meat was just as good. I said “I know that, and you know that so let’s go drink some beer.” I had him build seven more. Before they set the red iron on the building they set the pits in place with a crane. It drew a big crowd. 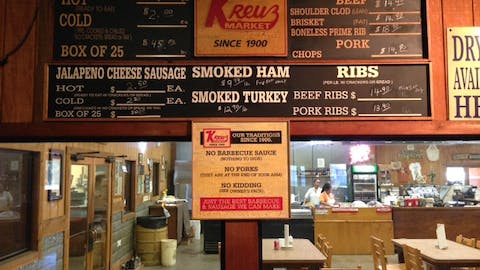 DV: You also made a very well reported spectacle when you first fired up the pits, right?

RS: You mean dragging the coals down? You know who instigated that? It was the Fort Worth Star Telegram. They interviewed me about the move. They asked “How do you start the fire? Do you use the same fire all the time?” I said it’s continuous. I explained “We take two big side logs and put the coals in between them. We put bark, kindling, smaller logs, and bigger logs. We pile it up, fan it a bit and it’s a fire.” He said “where are you going to get the coals for the new place?” I said “I hadn’t thought about it. I guess I’m going to out them in a tub and drag them down the street.” He said “Let me know when you do it because I want to be there.” It got a life of its own. 48 Hours was here. Two newspapers, three television stations. Dan Rather from Houston sent Harold Dow down here.

DV: Who dragged the coals?

RS: It was Roy, my son Lehman, and Keith. I told Roy what logs to put in there. We had them ready to put the coals in. We put the shovel in and put the coals in. I grabbed a soda bottle carton and fanned it and whoosh. It’s like I knew what I was doing.

DV: There was some animosity at that point, so were there any issues getting permission to get the coals?

RS: No, but I’m surprised she didn’t send me a bill for them.

RS: Cooper’s wasn’t in there either.

RS: I remember hearing some comments about Smitty’s not making it. We just like it when we make it. We just do the best we know how, and it’s fun when somebody likes it.

DV: How has the menu changed here at Kreuz since you opened up in the new building?

RS: When I first opened this up in 1999, that first Saturday we cooked about ninety-five shoulder clods and fifteen briskets. Now it has swapped. People aren’t afraid of fat. They found out it tastes pretty good. Now we sell a lot more brisket than shoulder. My wife won’t eat anything but shoulder, but I eat brisket half the time.

DV: Do you ever eat anyone else’s barbecue?

DV: When’s the last time you were in the building downtown?

DV: Do you miss the meat market side?

RS: I was going to be a meat market here. We had a grinder and a band saw. That one cooler was going to be the meat cooler, then we had the freezer in the back. It would be a small scale of what Southside Market does. I hired two extra meat cutters that summer, so I had three. One quit, then the second one quit a week before we moved over there. The third quit the same day because he said it would be too much work to be down here by himself. I figured I’d run it myself, but that same day that the last meat cutter quit they were running a roller thumper packing gravel for the new parking lot. I had a sign made that was over the side door that said “Meat Market Entrance.” It had been mounted the day before, and it fell off the wall from the vibrations. I told my sons “That’s an omen, and I’m out of the fresh meat business.” That sign is still upstairs somewhere. 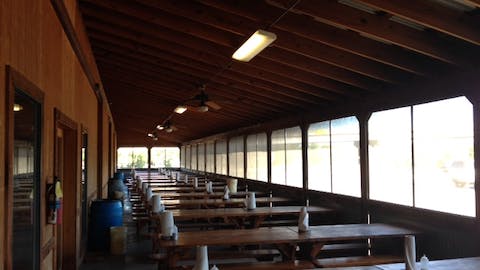 DV: Was there anything to mark the occasion when you retired here?

RS: They threw a party. I was really surprised. They had about a hundred of my friends here.

DV: You’ve been in the barbecue business for a long time. You’ve seen it when it was just a byproduct of meat markets to now when it is celebrated on a whole other level. How do you react to barbecue’s popularity?

RS: I marvel at it now, but I marveled at it in 1973 when Griffin Smith from Texas Monthly came down here and wrote about us then. It’s kinda like old furniture. When does that old table cease being a piece of junk and become an antique? For us, it was about 1973 when he discovered us. 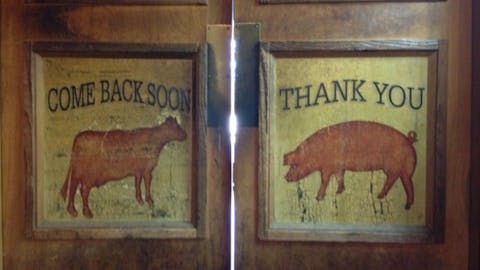 DV: You sold out a few years back. I’m sure it was hard at the time to give it up, but looking back, did you make the right choice?

RS: Yes. Keith has been doing a good job. I get to see him use his energy. I can come and go as I want to, and he’s making his payments. Keith gets the credit of the blame, whichever may be. It’s mostly credit now.