When your family came through Indianola, Texas, which suffered two hurricanes and was essentially abandoned by 1887, you know the family’s been around a while. That’s where the Mumphord’s landed after coming to Texas. They soon settled in nearby Dacosta and Placedo and a few other small towns south of Victoria. There’s even a Mumphord Rd. near Victoria and a two block long Mumphord St. in town.

The family has operated a barbecue joint in Victoria since 2000, but they’ve been cooking barbecue a lot longer. The huge family reunions held yearly in Placedo are the stuff of legend, and the family just keeps growing.

Co-owner Ricky Mumphord is hoping to see the business grow as well. There are plenty of customers at the barbecue joint, but he’s also working on a bottled sauce and a packaged rub. Soon, you might be able to take a bit of Mumphord’s Place home with you.

DV: This is a family affair, right?

RM: Right. Do you know about our reunion? This is our 110th year of our family reunion.

DV: Has barbecue been a part of that reunion since it started?

RM: Since we were kids all we’ve ever done is barbecue.

DV: Tell me more about these reunions. Who started them?

RM: My great grandpa started it. He came over from Indianola. Our family name is from West Virginia. It’s a place I need to go check out one day.

DV: Did the family land in Indianola?

RM: They came into Galveston, then Indianola. Dacosta’s not far from that area.

DV: Is that where the family originally settled in Texas?

RM: Yeah. Placedo, Port Lavaca, and Dacosta. Indianola used to be a thriving town, but a couple hurricanes came through and wiped them out. It might have been bigger than Houston if they’d kept on going.

DV: How big and wide is the family now at the reunion?

RM: About a hundred fifty, sometimes a hundred seventy-five people. The hundred year reunion we had about three hundred. Lots of family and friends. That was nice. We have the Friday nights [before the reunion] here at the restaurant, then Saturday is out in Placedo. We have a hundred fourteen acres. That’s an estate for the family.

DV: Does any of the family still live in Placedo?

RM: Yes. Two cousins. My aunt just passed away, but she lived there. There’s two acres plus a bunch of farmland. My cousin farms it. He just pays the taxes. That’s all we need. We just want to keep the land in the family.

DV: At the reunions, you cook barbecue for the whole family?

RM: Brisket, sausage, and chicken. I don’t eat the barbecue. I’m there for the sweets. I have some cousins, there are thirty-five of us grandkids, and they can cook, so I eat cake.

DV: Is the reunion where the idea for the barbecue joint was born?

RM: Yes. Then we did it in the backyard with friends, drinking a few beers.

DV: That’s where a lot of bad ideas start.

RM: [Laughing] Yeah, that’s how that got started. 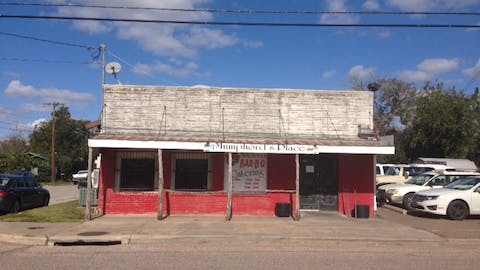 DV: Who in the family went in together to open it?

RM: Me and my brother Keith. He was at a plant with DuPont. He and I were the money.

RM: About six of us. My brother’s part owner. My sister works the cash register. My cousin’s back there. My nephew comes sometimes, and my niece. We crank the gospel music up in the morning and have a good time.

DV: You have a mini-reunion every day.

DV: How did you learn how to cook barbecue like this with direct heat?

RM: My dad and them had a store called Antone Allcake [sp?]. They would get a half a calf and cook steaks. We’re the brisket generation. I do direct heat because they did direct heat. 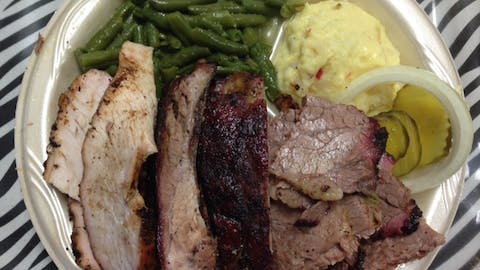 DV: How long does a brisket take on that fire?

RM: Eight hours. I’ve heard of those guys doing eighteen hours, but that’s smoking. We barbecue here. We don’t smoke meat and there’s a difference. It doesn’t always mean its good barbecue just because there’s a smoke ring on it. I’ve had some that’s kinda blah. You’re gonna get good seasoning on mine.

DV: You season these green beans up pretty strong too.

RM: That’s just pepper and garlic powder, then I’ve got another little ingredient to bring it out. Then of course we use butter too.

DV: I had this pork chop special today. Are there other specials during the week?

RM: Just that one. We’re working on some things. Have you ever had cowboy stew? We cook that at the family reunions. It’d be a fight if we didn’t have it. 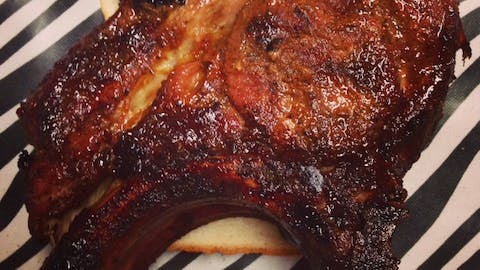 DV: What in the cowboy stew?

RM: It’s tripas, but you’ve got to leave the marrow in there. The marrow’s your flavor. Then you do hearts, kidneys, and two briskets.

RM: Probably. Those cowboys used to kill a calf and they’d throw everything in there. We omit some of it, but people around town ask about it. They want some of that. That’s some good eating.

DV: Do you ever get around to the rest of the state and eat barbecue?

RM: We’re married to this place, so it’s hard. I want to go to that Texas Monthly barbecue festival in Austin. I went to the Houston Barbecue Fest this year.

DV: You made it into the Top 50 last year, so did that do anything to change your business?

RM: It brought some folks in. A lady called me from Virginia and said she’d stop by because she saw me on the Top 50. They hear about us from all over the country, and a lot of guys from Texas too. They tell us to keep it up.

RM: It’s rough. People think it’ll be exactly the same every day, but sometimes you get a brisket that’s a little funky. Sometimes you have one of those days where it’s not great, and you can’t help it.

DV: Does the direct heat cooking help at all when the weather changes. The wind and weather can really affect the temperature of a smoker, but do those hot cookers have the same problem?

RM: Sure. Those pits act crazy when the wind’s blowing. Those coals will also burn really fast in that firebox. That’s why I use mesquite and live oak. I prefer those two woods. They make a good hot fire.

DV: That good hot fire can also be dangerous with that fat dripping down. Have you had any flare-ups or fires?

RM: We’ve had some, but nothing burned down. We’ve got a hose back there, but I tell those guys “never lift it up.” If you see a gap, shoot that water there. The inspectors come in and look at the pits. They say “Ricky, don’t clean them for us. That’s your flavor on there.” I really appreciate that. We scrape it off now and then, but you’ve got to have a little ugly on it.

DV: You’re building that seasoning for the next generation.

RM: I’ve got a nephew who I want to jump in on this. It’s fun, but it’s work. It’s harder since we made Texas Monthly because we’re trying to be more consistent. People expect a little more from you.

DV: Maybe you need a vacation.

RM: We took a cruise in February so we closed for a week. We don’t leave this place open if one of us isn’t here. If my body’s on vacation, my mind’s on vacation too. We make pretty good money too, so it’s not gonna kill me. I pay my employees every week.

DV: I was so happy to find this place in this area of the state. Everything was great today, so I appreciate you keeping the quality up. Just keeping putting out that good food so I don’t get any complaints.

DV: You talked about the next generation, but do you still have the energy to keep going?

RM: We’re good right now. We’ve got a couple of them in here seasoning meat. They don’t know much about the cooking yet. I think that fire’s a little hot, but it sure was hot to us too. You’ve got to pay attention.