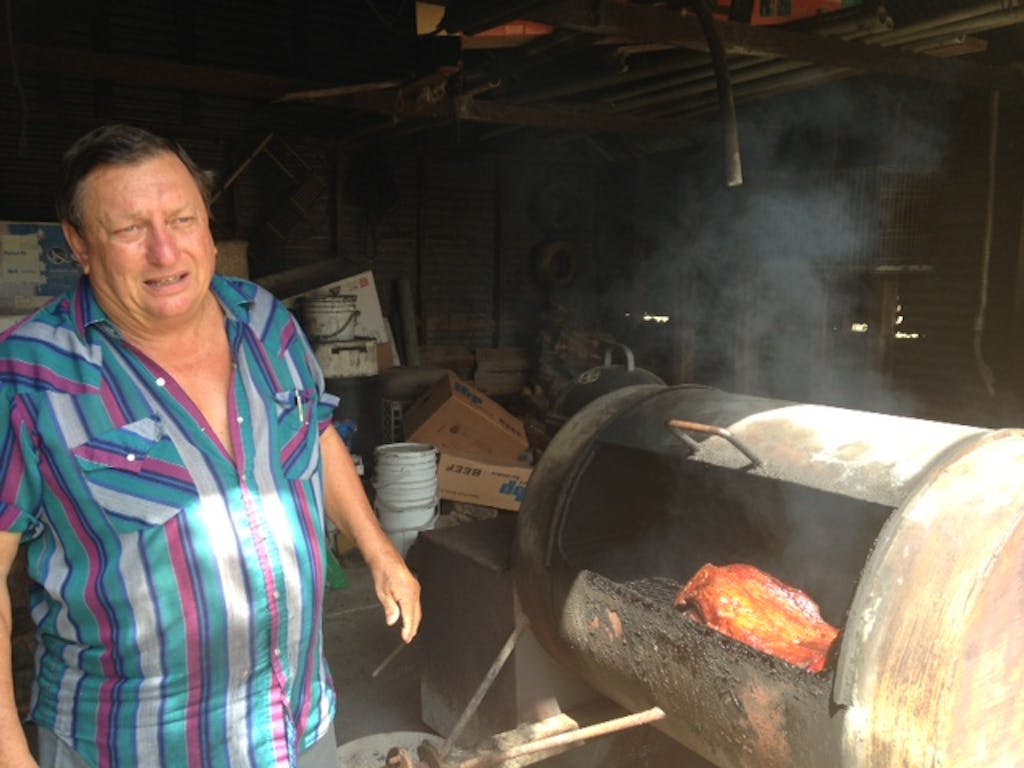 When Roy Jeffrey started working at the City Market in Luling back in 1954 he had a full head of black hair. At sixty-nine years of age it looks like he hasn’t lost a single one. When I asked him how he stayed looking so young, he told me “that’s what happens when you eat fat barbecue and drink cold beer.” He also noted that his mother also had black hair when she passed away at ninety-five. I guess it runs in the family. Barbecue also did. It was his cousins he worked with in his first barbecue job at City Market in Luling, but he’s probably most well known for his stint as the pitmaster at the copycat Luling City Market in Houston. Now he works alone in tiny McMahan without any barbecue heirs to take over when he finally hangs it up. Get it while you can.

I started off with an introduction and let him know I worked with Texas Monthly.

Roy Jeffrey: I was in there a few years ago, but they had me in there with the wrong address. It said I was in Dale [,Texas] and people would call from Dale wondering where I was. I’d tell them they had to come to McMahan.

Daniel Vaughn: I’ll make sure to get your address right this time around. How long have you been running the place?

DV: Do you call this town Whizzerville or McMahan?

RJ: McMahan. Most everybody calls it Whizzerville. We have a Lockhart telephone number and a Dale mailing address. That confuses even more people, but we are on GPS, I think.

DV: Where did you learn to barbecue?

RJ: I started at City Market in Luling when I was ten years old.

DV: Are you from Luling?

RJ: No. I’m from right here. I grew up about a quarter mile up the road there.

DV: Do you still live in that house?

RJ: Yep. It was my parents’ house.

DV: How did you start working at City Market?

RJ: They were kinfolk. Mom and dad and son started the business there in the 50’s. I’d work there in the summers. They’d pick me up and take me down there. When I graduated high school I started there full time. I ran it for about five years. 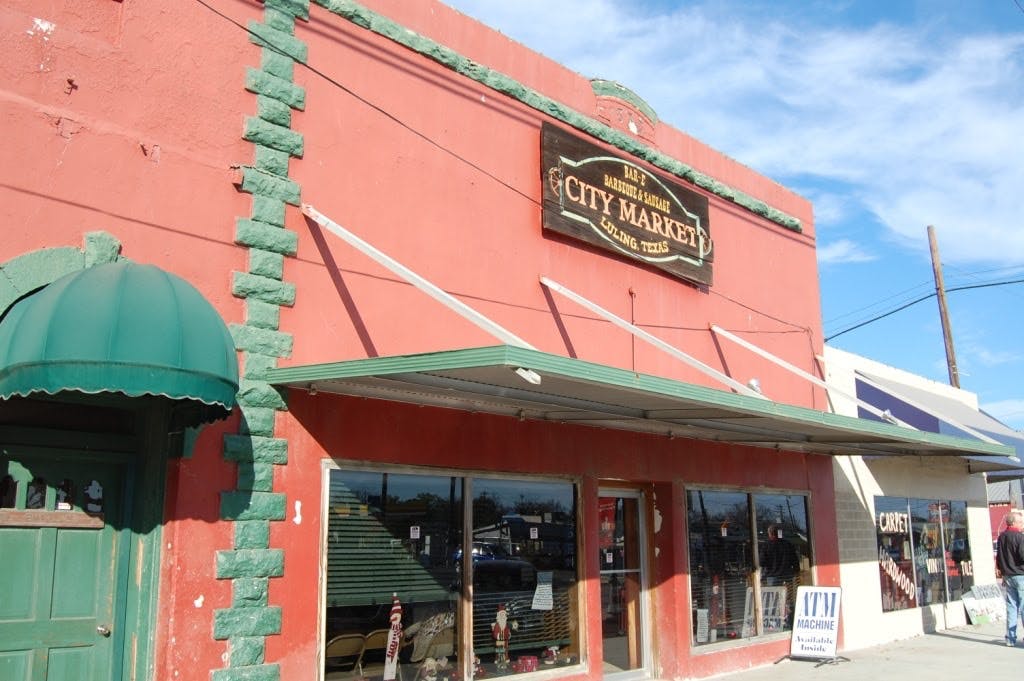 DV: How old were you when you started cooking?

RJ: I was a teenager, I reckon. There was an old man, Howard Ellis, that did all the cooking until then. He originally worked at Kreuz Market. Back in those days it was a grocery store in the front and barbecue in the back. They had a meat case. I learned how to cut steaks there. I made sausage too.

DV: I heard the beef used to come from the family ranch.

RJ: That’s right. He fed out his own calves. When I left it was still a butcher shop. When I came back [after spending ten years away] they’d taken the meat out and were using boxed briskets.

DV: Did they always cook briskets?

RJ: At first we’d cook everything. Whatever didn’t sell as a steak, we’d cook. We’d bone out a whole t-bone and cook the whole thing. In the winter time we’d even cook pork butts. Pork ribs didn’t come in until about the 70’s.

DV: How many joints were in Luling then?

RJ: Back then there were at least a half dozen barbecue joints in Luling. There were three on Davis Street. There was one on the San Marcos Highway that burnt down. That family opened Luling Bar-B-Q.

DV: Were they called barbecue joints or just grocery stores?

RJ: They just called them by their name like City Market or Red & White.

DV: How did your time at City Market end?

RJ: Buddy Ellis who owns it is my third cousin. I was working for him about seventy hours a week. I told him I needed some help. He said “no you don’t.” I was so tired I could hardly make a day. He was running me to death. The next day he came in and tripled my salary. Before I was making $50 a week, and that put it to $150 a week. That was a lot of money back in the 60’s, but I asked if he was gonna hire me any help. He said he wasn’t so I gave him my two weeks notice.

DV: What did you do then?

RJ: I laid around for four months, but you can only drink so much beer, and play so many dominoes. I went to work for the state for ten years in the engineering department. I was in the big layoff in the 70’s.

DV: Did you do any barbecue in that time?

RJ: No. That was the only time in my life.

DV: Did you go back to barbecue after the layoff?

RJ: Buddy found out I came back and didn’t have a job. He stopped and told my mother “if he wants to work, tell him to come in on Monday.” I showed up and [current City Market pitmaster] Joe [Capello] didn’t even know. He said “what are you doing here?”

DV: So Joe was running the place by that time?

RJ: Yep. He started there as a little kid, about eight or ten.

DV: How long were you there for your second stint?

RJ: About ten years. I worked there until a deal came up in Houston [in 1981]. There were a couple customers I got to know who would come in from New Braunfels. They came in one day and said “how about opening a place in Houston?” I said “well, okay.” Things weren’t going too well in Luling.

DV: Do you get back over to City Market anymore?

RJ: Joe and I are still okay. We’re still friends. I get hungry for that sausage, so I go down there. I used to make it here, but it’s too much trouble and I don’t have the volume.

RJ: That’s right. They had the money and I had the knowledge. 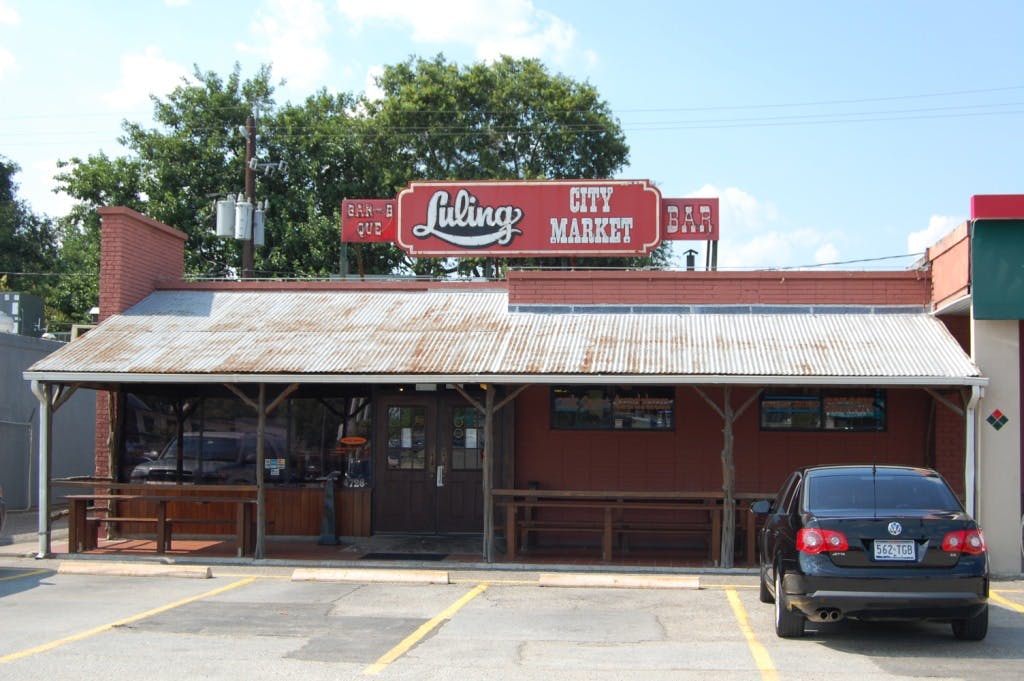 DV: Were you a part owner in it?

RJ: Yes. I still have an interest in it.

DV: I presume you were the pitmaster there.

RJ: Yes. I went down there and stuck it out nine years. It was a successful place. I had my wife and my mother working there.

DV: Was it popular when I opened?

RJ: Not right away, but we had an article in the Houston City Magazine. They did a three page article on a Friday. On Saturday, we had a line out the door from 11:00 when we opened until 9:30 when I finally put a “sold out” sign up. I was cooking briskets in three hours and ribs in an hour.

DV: Did you wrap them to cook faster?

RJ: No. They didn’t wrap them back then.

DV: Do you wrap now?

RJ: When they’re about 90% done I take them off and let them cool down before I wrap them, then I heat them up in the foil. I’ve learned more about how to save money running a small place.

DV: What prompted you to come back here from Houston? Did you just get sick of it?

RJ: Houston wasn’t for a country boy. Back here in McMahan was the first time I could do what I wanted to do.

DV: From what I’ve read, one reason your business partners brought you to Houston was to get that City Market sauce recipe.

RJ: Is that right [laughing]?

DV: They’re still serving that sauce. Now they even bottle it and sell it online.

RJ: They were in the process of doing that when I left.

DV: Did you catch any flack from City Market in Luling for using that name?

RJ: Not really. It’s not their name. I wasn’t too happy with it at the time, but there’s nothing I could do about it.

RJ: I quit because of a health issue. I had no earthly idea what I was going to do, but I was back here in two weeks.

DV: Did you come back and buy this building?

RJ: No. The guy who owned the town then, Leonard Mooneyham, he owned it. We had an agreement. He had twenty-some head of horses and he needed somebody to look after them. I told him I knew two things about horses. Don’t walk behind one, and don’t own one. He let me take care of them anyway. We decided to trade labor for rent. It was better for him to have somebody in the building. The whole town was boarded up for ten or twelve years in the eighties. 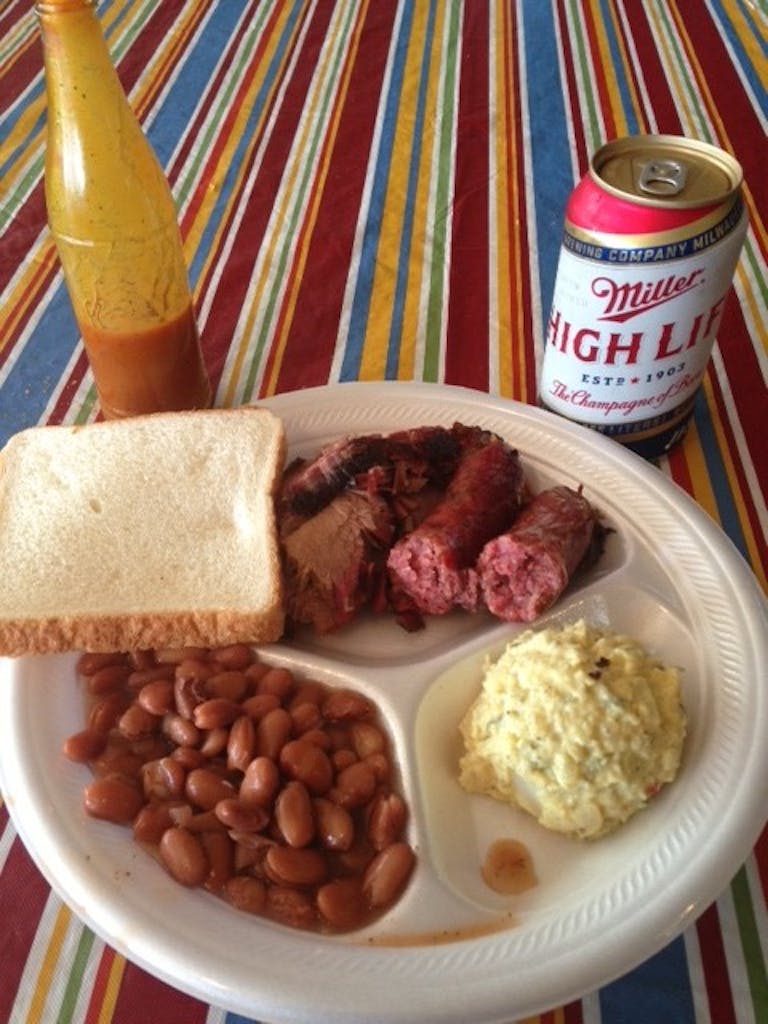 DV: Is he the one that sold the whole town a few years ago?

RJ: Yes. The guys that bought it would come to Austin during the races. They’d stay here and would go to Kreuz. When they saw the town listed they started coming out here. They came for a few years before they bought it.

DV: Did you worry when someone bought the town?

RJ: No. They wanted to keep thing the way they were.

DV: What did it look like when you opened? Were there other businesses operating?

RJ: There was nothing here. It was a ghost town. I was the only one here for years.

DV: I hear you’re the unofficial mayor of McMahan.

RJ: Well, I don’t know. Official a—hole or something. I’d rather be the judge. I’ll change my name to Judge Roy Bean Jeffrey. I’ve got a good oak outside.

DV: You’re a bit secluded out here. What is your customer base?

RJ: Mainly friends and kinfolk. There are some local people, but I don’t get much traffic from Lockhart and Luling anymore.

DV: Do you have any kids who might take this over?

DV: Are you a barbecue man for life?

RJ: I guess. I’m not one to sit around at home. I’d rather sit around here.

DV: At least you get a little cash sitting around here.

RJ: I don’t make any money here. I did pretty good here for a while. I had the first beer license here in McMahan, so I sold the first legal beer.  The convenience store down the road closed, and when they reopened they put beer in. That pretty well took care of my beer sales. I tried some different things to get people down here. I finally settled on old-fashioned hamburgers. That kept me open. It’s a lot more work than cooking barbecue.

DV: Are you still having any fun?

DV: How much longer you got in this?

RJ: I just renewed my beer license. It was $1005 for the next two years, so I guess I’ll hang on for at least another two years.