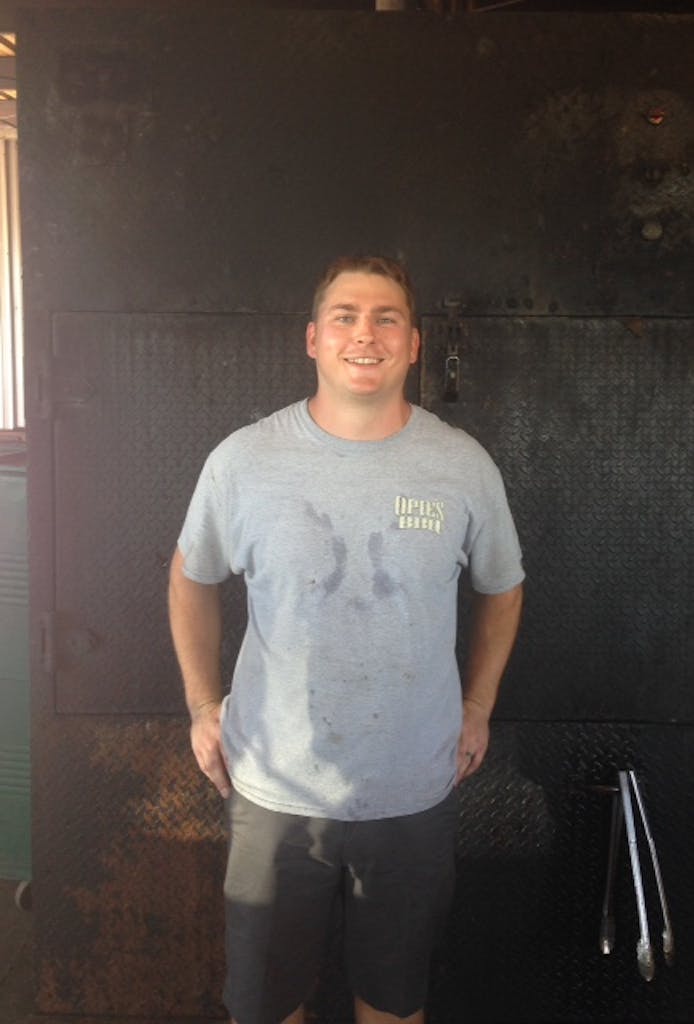 Todd and Kristin Ashmore are the owners of Opie’s BBQ in Spicewood. A few years ago Seth Glaser married their daughter, and shortly after he started working there. At first, it was just a way to earn some extra money while he attended classes at Texas State, but after a few years he realized how much he liked barbecue. Now, the Ashmore’s son-in-law is also their pitmaster.

When we named Opie’s to the Top 50 last year, it was Marco Oglesby who was the pitmaster. He was let go earlier this year and is now at Schmidt Family Barbecue in Bee Cave. His departure left the door open for Glaser to take a more active role in the pits, and he’s taken to it well. He might be young and relatively inexperienced, but the barbecue I ate here last week was the best I’ve had at Opie’s.

Daniel Vaughn: What was your first introduction to Opie’s BBQ?

Seth Glaser: I ate it back when I was in high school.

DV: Where did you go to high school?

SG: In Marble Falls, but I grew up in Fayetteville between Austin and Houston outside of La Grange. It’s a little bitty place. I was there until eighth grade.

DV: Did you eat any of the barbecue around there when you were growing up?

SG: Not that I remember. There wasn’t much around Fayetteville. Our school was so small it didn’t even have a football team. My dad and brother cooked out back with me, but that’s about it. There wasn’t a much better time than that.

DV: What was on the menu back then?

SG: Nothing too fancy. Burgers. Ribs every once in a while. We weren’t professionals.

DV: When did you begin working at Opie’s?

SG: Roughly three years ago. I did just about everything but cook and run the register. I cut meat in the front and seasoned meat in the back. I cleaned up here or there. I did everything I could, even cleaned up dishes.

DV: Were you married to Todd and Kristin’s daughter when you first started working there?

SG: Yes. They gave me a job because they could give me a schedule that was easy to work around school.

DV: Where were you going to school at the time?

SG: I was driving back and forth three times a week to San Marcos at Texas State. It was a very long drive. It took two hours from door to door. It wasn’t very much fun.

DV: What were you studying?

SG: Water resources. I figured at some point in the near future, water will be more expensive than oil, especially in these parts.

DV: And you work just up the road from the Pedernales River that’s been very low for a very long time.

SG: I know. I remember four or five years back being in a boat going underneath the bridge on 71 there. Now you can’t even put a jet ski in there. I just drove across it a few minutes ago, and I bet it’s not even knee deep.

DV: Hasn’t Spicewood had to truck in fresh water recently?

SG: I wanna say the issue is solved at least right now. For the past year or two they had water coming in non-stop on eighteen wheelers. We haven’t had an issue at the restaurant.

DV: So, you went from studying water to working with fire.

SG: It’s all from the earth, right? 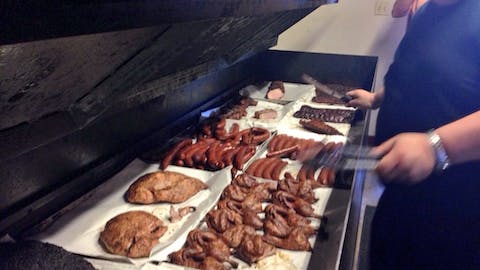 DV: Did you complete the degree in water resources?

SG: I was working part time at Opie’s and I really enjoyed that. The direction of school just wasn’t going where I thought it was. I loved working the pits a whole lot more than I was enjoying school. I figured I should jump into the barbecue and keep getting the experience. I felt like I was just wasting time driving back and forth to San Marcos. I thought in the end I’d have a job I didn’t love. It doesn’t matter how much money you make as long as you love what you do. I’m finding that to be true with barbecue.

DV: Was there a training period that you went through at Opie’s, or did you just spend progressively more time working the pits?

SG: I just worked more at it. There’s no manual. I was given more responsibility along the way. I got more into it when a cook couldn’t show up and I had to get out there and work. I did what I could, and I guess they were pleased with the results.

DV: Who trained you?

SG: There were three cooks when I started there. There was Sammy, Nacho, and Marco.

DV: Do any of them still work there?

SG: No. Sammy and Nacho went to other businesses. Earlier this year Marco went elsewhere, and I started working the pits full time.

DV: How did you learn that you had a new position?

SG: I came into work one day, and I was informed of it in the morning. They asked me if I thought I could handle it. I said I’d try, and I’ve been there since. They haven’t kicked me out of the family yet.

DV: Is it nerve-racking to work for your in-laws?

SG: Not necessarily. They’re good people. My wife also works with me, so we get to carpool to work every day. We have the same hours, and our son gets to come hang out at work.

DV: When you took over did you still have to wash dishes?

SG: I still try to do whatever needs to be done. I wish I could be up front cutting meat more, but especially on the weekends it gets pretty hectic. I’ve gotta make sure I don’t burn anything.

DV: How many pits do you have to keep an eye on?

DV: And all of them burn mesquite?

DV: Can you describe Woody, the contraption that sits out back beside the brisket smoker?

SG: My wife’s grandfather built it. It has three stations that can release wood to feed the fire at night so nobody has to get up to feed the fire. We try to use as much as we can through the night. It’ll throw on wood two or three times overnight. 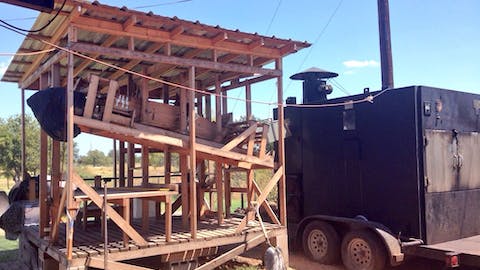 DV: It drops in a log or two every few hours?

SG: Yes. We have it on a sprinkler timer, so it feeds wood in there at midnight and 3:00 in the morning.

DV: What time do you get in?

DV: And Woody hasn’t let you down yet?

SG: Not yet. We’ve actually looked into a thermometer system that hooks up to your phone. You can set it to give you an alarm when the pit gets above or below a temperature setting.

DV: You’ve got three pits to keep track of, and a huge menu. That’s gotta be a challenge to keep up with every item on the pits?

SG: Right. The hardest thing is knowing how much to cook. They all cook at different times too. I just wish I knew how many people were coming in every day. I wish I could cook all that I can every day, and let that be it. That’d be nice, but where we’re at means we have to be open all day long. There are also not a lot of options out here, and you have to provide some options for dinner. We hate to throw food away, and you hate to run out, but we seem to do one or the other every day. It never ends. 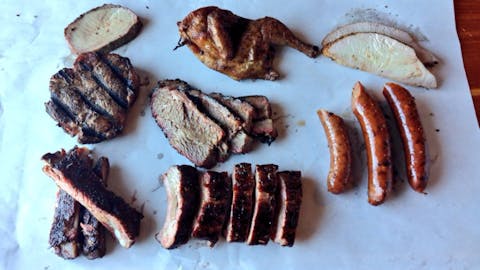 DV: It’s a gamble and either you or the customer loses.

SG: Exactly. We do everything we can to keep the customers happy.

DV: Let’s talk about one of those customers. Tim Duncan [of the San Antonio Spurs] has been coming in pretty frequently, right?

SG: He does come in, but I don’t know how much I should talk about that. He likes to keep to himself. He just likes to come in and have good food.

DV: How much meat do you cook these days?

SG: On the weekends it’s about fifty-five briskets. Now that school’s back in it’ll start to get slower. I can go down to fifteen on a Wednesday. That’s been our slowest day.

DV: It’s the sweet and spicy baby back ribs that are the most popular menu item, correct?

SG: It is. I wish we’d get as much recognition for the brisket since it’s so hard to cook, but we sell a lot of the ribs.

DV: How many racks?

SG: Close to a hundred racks. We cook closer to sixty racks of spare ribs.

DV: How long were you into the job before you felt comfortable cooking the briskets?

SG: Not too long, but I try to better myself every day. But then, sometimes the harder you try and the more you think about it, the worse it turns out.

DV: Do you have any barbecue appetite left to travel to eat other people’s barbecue?

SG: Not a whole lot, but a week or so ago I was in San Marcos to stop at Hays Co. BBQ. I like to see what other people are doing. I got some brisket to try it out. It’s a cool set up out there with the live music in the back.

DV: How was the barbecue?

SG: It was real good.

DV: How often do you eat your own barbecue?

SG: I try not to do it too often because it’s not the smartest thing to eat all the time health wise. I eat it a couple or three times a week. I just try not to every day. I eat a lot of salad, and my wife and I eat a lot of Indian food.

DV: Last summer you were named to the Texas Monthly Top 50. This wasn’t your first time on the list, but did you see any change in the amount of business after that announcement?

SG: We get busier all the time, but that made a big difference. We got a lot of people in who were trying to get to every place on the Texas Monthly list.

DV: Are there others that help work the pits?

SG: Yes. Marina Sanchez is the other cook. She should get as much recognition as I do. She cooks every day too. She hasn’t been cooking that long either, but I’m just one small piece of this puzzle.

DV: Some people work for years to get into your position. You’re already there at just twenty-seven, so what’s next? What are your goals in barbecue?

SG: There’s nothing that I want for myself right now. I don’t have enough experience right now. Maybe we’ll take over this location one day. I don’t know.