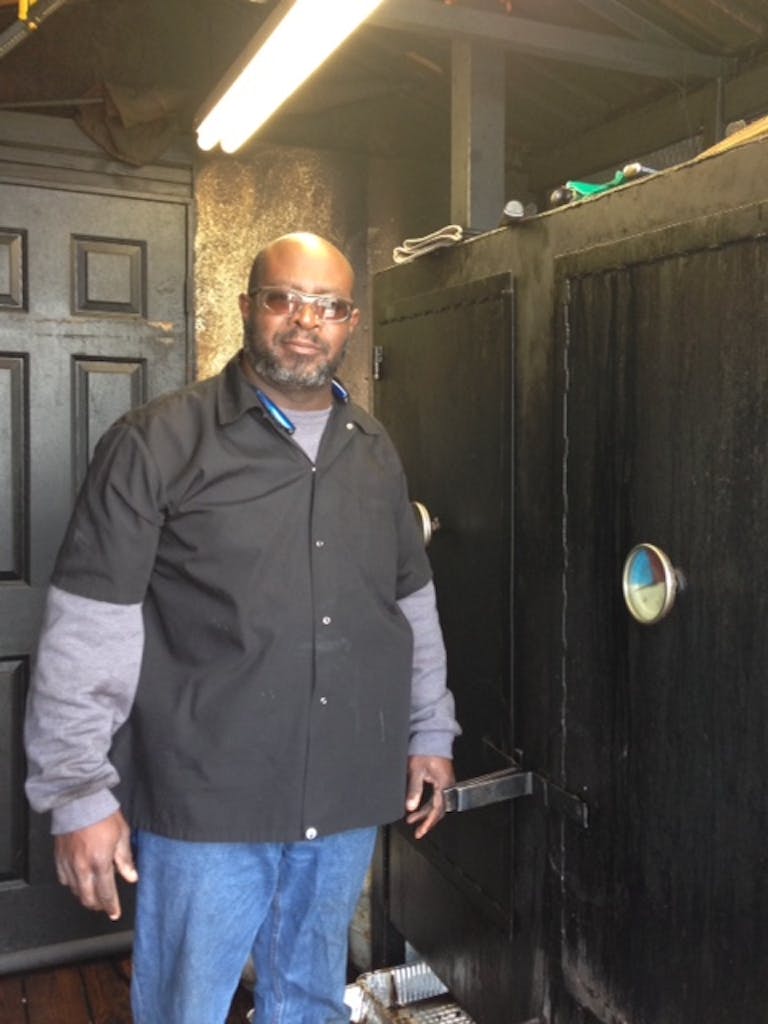 Brooks’ Place isn’t exactly easy to get to, but that’s part of its charm. Cypress is at least a thirty minute drive from downtown Houston. It’s a destination, and those in line along with you understand that traveling for good barbecue is worth it.

Trent Brooks has been running this trailer on a parking lot in front of an Ace Hardware for the past six years. It started as a side gig, but soon became a necessity. It took him a while to build a steady clientele, but since his name was announced in the Texas Monthly Top 50, business has been booming. Nowadays, especially on weekends, Brooks is just trying to keep up.

Daniel Vaughn: When did Brooks’ Place get started?

DV: What brought you into the barbecue business?

TB: It started off as just a weekend job. My wife wasn’t able to go back to work so I needed to supplement for her income. I started selling barbecue on the weekends.

DV: Was it started as a catering operation, or did you just set up here in the parking lot?

TB: I set up here. I used to pass by here every day on the way to work, so I stopped in and asked the owner at Ace Hardware. I gave him my presentation and the rest was history.

DV: Did you set it up with permits and everything, or was it more of a fly-by-night operation?

TB: Before I started here I was across the street in the old HEB parking lot. I was there illegally. I moved from there to an Advanced Auto parking lot. I bought the trailer, but their corporate office wouldn’t give me the paperwork I needed to get a permit. I ended up coming by here and the owner was willing to provide the paperwork. I went to Harris County, got my permit, and I’ve been here ever since. 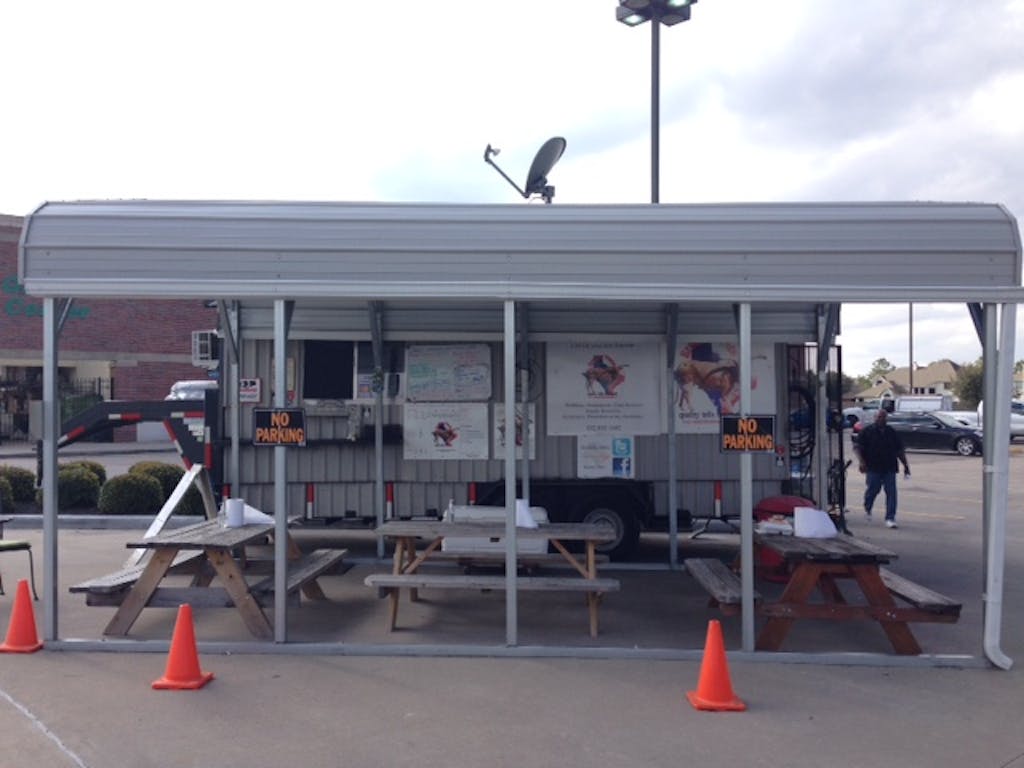 DV: I presume this is your full time job now. What was your previous job?

TB: I was a material specialist for a gas compression company.

DV: What is that mean to normal people?

TB: We had $20 million in inventory in shipping and receiving. I was in charge of supplying every one of our sites with the materials they needed to complete the jobs.

DV: At what point did you quit that job?

TB: I didn’t quit. Things were getting old with office politics. I was butting heads with the kids they were hiring who didn’t share my work ethic. They fired me and I went home and told my wife that I wasn’t going back to work for anyone else. If we could pay our bills with barbecue, this was what we were going to do.

DV: Getting a taste of being your own boss is powerful.

TB: I had a taste from doing it on the weekends. I didn’t expect this to be where it is now, to be honest. I’m thankful that it happened and we’re continuing to grow and get better?

DV: Where did you learn how to barbecue?

TB: I learned it from my dad, Freddie Brooks. He didn’t exactly teach me because it wasn’t something that I really wanted to do. I didn’t want to take the time, but I must have picked up on something.

DV: Where did he cook?

TB: In the backyard for churches and stuff like that.

DV: What was he usually cooking?

TB: The basics. Brisket, ribs, sausage, and chicken. He never did pulled pork.

DV: How similar is your cooking now to what your dad did?

TB: The flavor is different. Mine is more salt than what he has on his. He liked to experiment with different woods. I try to stick to the basics.

DV: Does he still cook?

DV: Does he still think his barbecue is better than yours?

DV: Did you or do you ever test out your cooking on your family before you serve it to the public?

TB: No. I didn’t test it on them because family will tell you anything. The best test for my product was for me to come out here and sell it to the people. Let the people who don’t know me tell me if it’s good or not.

DV: How long were you out here cooking here before you felt comfortable with the feedback?

TB: It probably took me about six to eight months for me to start building up my clientele and seeing repeat customers. Once I saw that I could relax a little bit and realize I might have something. It’s six years later and I’m still working on my craft.

DV: There isn’t a point where you feel like you’ve got it down and don’t need to keep working on it?

TB: No, and that’s why I’m not the guy that’s real comfortable with the term “pitmaster.” Once you become a master at something there’s nothing above that. That’s it. I’m always striving to do better. Everything can be improved, but then if it’s not broke, don’t fix it.

DV: It’s certainly not broken here these days. You’ve made it into the Texas Monthly top 50, but how did you hear about that?

TB: A local pastor was one of my first customers when I started. He came by here and started talking to me about Texas Monthly and the list they were going to come out with. Before I opened this, I had not idea about Texas Monthly. I had no knowledge that barbecue was as big as it is. I told him “I’m in a trailer in front of the Ace Hardware in a parking lot. That’s the furthest thing from my mind.” He kept telling me “Your product is there. Just believe in it.”

DV: I bet I got an email from him.

TB: I bet you did. He started sending tweets to Texas Monthly telling them to come visit. The very first article on us was from a group of girls called Urban Swank. It led to everything. We got invited to the first Houston BBQ Festival. We got a call from Texas Monthly, then another call. I was sitting out here from 10:00 in the morning to 7:00 in the evening trying to get rid of three briskets. By the time the magazine hit the stand on May 22nd – I remember the date – I came out here in the morning with what I thought was enough food to last until 7:00, but thirty minutes later I was sold out.

@TexasMonthly you guys need to sample @BrooksPlaceBBQ in Cypress before the 2013 BBQ issue. “Houston, we have no BBQ problems!”

DV: You started cooking more then?

TB: I started cooking right then. I got back out here the next morning. At 9:00 the line started forming. It stayed like that for a good month. I was cooking around the clock and could never cook enough food.

DV: That had to be stressful.

TB: And it was hard to sleep.

DV: Nothing about your skills, but cooking twenty or thirty briskets is a lot more difficult than three. How did you handle the adjustment?

TB: I went from three to twenty overnight. That was another learning curve. I had a smaller seven foot pit then. There was a lot of shuffling.

DV: When did you get this bigger smoker?

TB: I got this one eight months ago.

DV: You’ve also looked into a brick and mortar location. What happened there?

TB: We thought we were looking in the right direction. We got scammed and lost a lot of money in that deal. We’re still looking, but we’re trying to find the right venue. We don’t want to stray far since this community has been supporting us for the past six years.

TB: I’m fine. If we’re not able to get into a restaurant we might get a new trailer that is more efficient. We may go to solar power to get rid of these generators.

DV: Did you grow up here in Houston?

DV: Other than your dad’s, do you remember eating barbecue around here when you were a kid?

TB: Growing up I used to go to Burn’s. I went to the original Pappas that was off of I-45 and Tidwell. I went to Williams before it burnt down, but that pretty much it.

DV: Did you use the flavors you remembered form any of those places to inform your cooking now?

TB: I basically went out and did my own thing.

DV: I appreciate the unique flavors you have here in the barbecue and in the sides. You also leave plenty of fat on the briskets. 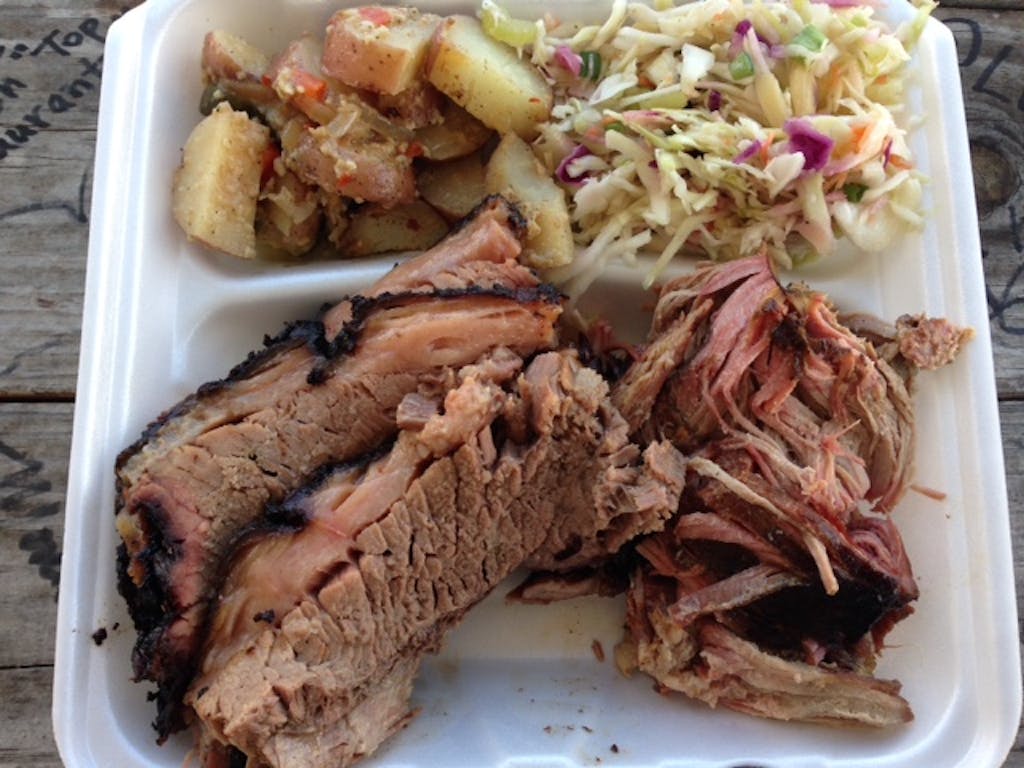 DV: You’re paying a lot more for that fat and beef these days. How have you reacted to those price increases?

TB: A pound right now is $16.99. We’ve considered going up on our prices. I thought about it, and instead of going up we’ve cut back a little on our portion size. We used to do ½ pound sandwiches, but they’re a little smaller now. I get texts and emails about it, but we have two options – you pay a little more, or we cut back a little on the portions. We chose what we thought was the lesser of two evils. We’ll see how it works.

DV: What is the most popular item on the menu?

DV: Are you still cooking twenty briskets every day?

TB: We’ve been down a bit from this cold and rainy weather. The weekend is our busiest time.

DV: Do you still go out and eat other people’s barbecue, or do you get enough of it here?

TB: I don’t eat this. Eighteen hours a day, that’s the last thing I want. I know what that tastes like. I know that flavor, so let me get something different. I have been to Gatlin’s, Corkscrew, and Virgie’s. I haven’t made it out to Killen’s yet.

DV: If it’s not barbecue, then what is your preferred food?

DV: I see you have some here on the menu.

TB: That’s for Lent. We do smoked catfish plates every Friday during Lent.

DV: I’m guessing you don’t do much barbecue at home then?

TB: I don’t cook any barbecue at home.

DV: But I’m sure you get asked a lot, at least for family gatherings.

DV: You’ve got plenty of barbecue years left. Are you still enjoying it?

TB: I’m still enjoying it. I’m tired, but I’m still riding the excitement that this all happened to me. This guy here in a trailer trying to feed the people one order at a time. Some like it, some don’t, but these days a lot more like it than don’t.