Cary Hodson wanted to bring a brewery to historic downtown Garland. City regulations said he needed food to go along with his craft beers, so he enlisted the aptly named Tex Morgan to bring the barbecue. They made room for an Oyler smoker, and now Intrinsic Smokehouse & Brewery has great brisket to go along with all that great beer, or vice-versa. 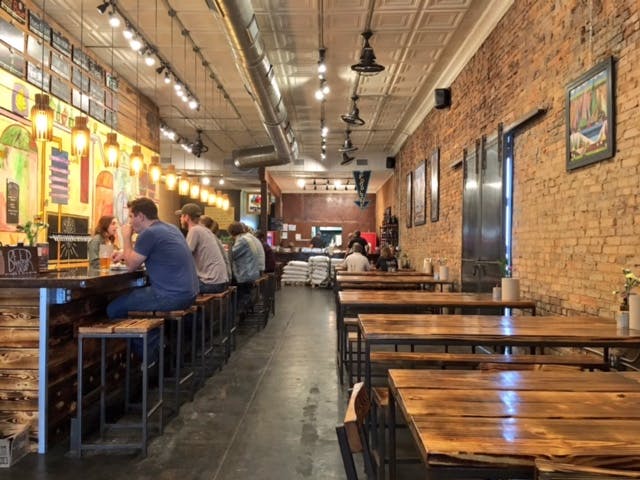 It’s a big room. Beer tanks are on display up front followed by long row of picnic tables (Hodson is also a furniture maker), and a beer bar. The barbecue counter is at the back, so head there first if you want a bite, and beers must be purchased separately at the bar. On its own, I’d suggest the TARA smoked lager, but with the barbecue I was partial to the Fruit Cup, a crisp and refreshing grapefruit ale. As for the barbecue, most of the menu satisfies.

Over three visits the brisket has maintained its high quality. Slices from the flat and the point are juicy, tender, and smoky. Sweet St. Louis ribs have also been impressive, if a little on the thin side. While the smokiness of the smoked chicken has varied a bit, it has always been juicy. A heavy hand with the rub makes the skin unpleasant to eat, but I’d be happy with all three in the $16.50 three meat plate.

There are plenty of side options to choose from, but I’d veer away from the fried ones. Corn nuggets and fried okra are from a frozen bag, and are stored for service in steam tables. Sadly, the pulled pork is right there along with them. The pre-pulled meat sat there getting ever-drier. Piled high on a sandwich, it looked like tassels from a throw rug. And don’t count on the sauce to save it.

Speaking of the sauce, four varieties of house-made sauce are available, but they all taste like an attempt to recreate a thick, sweet bottled variety. All four are made from the same base, and just get hotter as they go up the scale. If you must, I’d go with the hottest one, and it is a must with the chicken wings (served after 3:00). They are smoked then fried, but get no other seasoning. The sauce they’re tumbled in is the only flavor boost they’re going to get, so get the hot one, or smuggle in your own wing sauce.

Thankfully, the chopped beef isn’t stored in a steam table. It gets chopped on the block from the fatty end of the brisket. The serving is so generous that it obscures the bottom bun. There’s enough juiciness to the meat that it doesn’t need the sauce, and a few slices of the spicy pickles add a nice crunch. The sandwiches come on hearty potato buns which hold up nicely, even after soaking up some good brisket fat.

Intrinsic serves daily specials at the meat counter, and Wednesday is bologna day. Cajun seasoning is added to the thin slices that are then smoked. It’s a unique way to serve smoked bologna, and one of the best I’ve tried. In sandwich from, it gets a pretzel roll. While I appreciate the attempt at elevating the bologna sandwich, I really just wanted some white bread and mustard sauce.

A simple rough-chopped slaw is a good side and goes well on the bologna sandwich. The creamy mac-and-cheese is a good accompaniment, and I enjoyed the meaty pinto beans as well. Toning down the tartness of the greens is needed, and the jalapeño cream corn has more cream cheese than corn, although I must admit it was hard to put down.

Look for other daily specials like the hearty brisket tacos on Thursday. There are a few dinner-only options available after 3:00 like the previously mentioned chicken wings and a variety of flatbreads. The sauce is a dominant flavor on the flatbreads, but the one I tried had moist smoked chicken and plenty of blue cheese crumbles too. Hodson said the nachos, on house-fried chips, are the most popular item, but I was already filling up on flatbread.

Intrinsic Smokehouse & Brewery is a great addition to the neighborhood. Garland’s other well known barbecue joint is Meshack’s. It’s a quintessential barbecue shack that’s rough around the edges, but hard not to love. With Intrinsic, Garland now has the opposite: A sit-down barbecue joint where all the edges are sanded smooth, and the menu is wide enough to find a good pairing for all those great beers. I’m just happy that it’s close enough to home for me to be a regular.