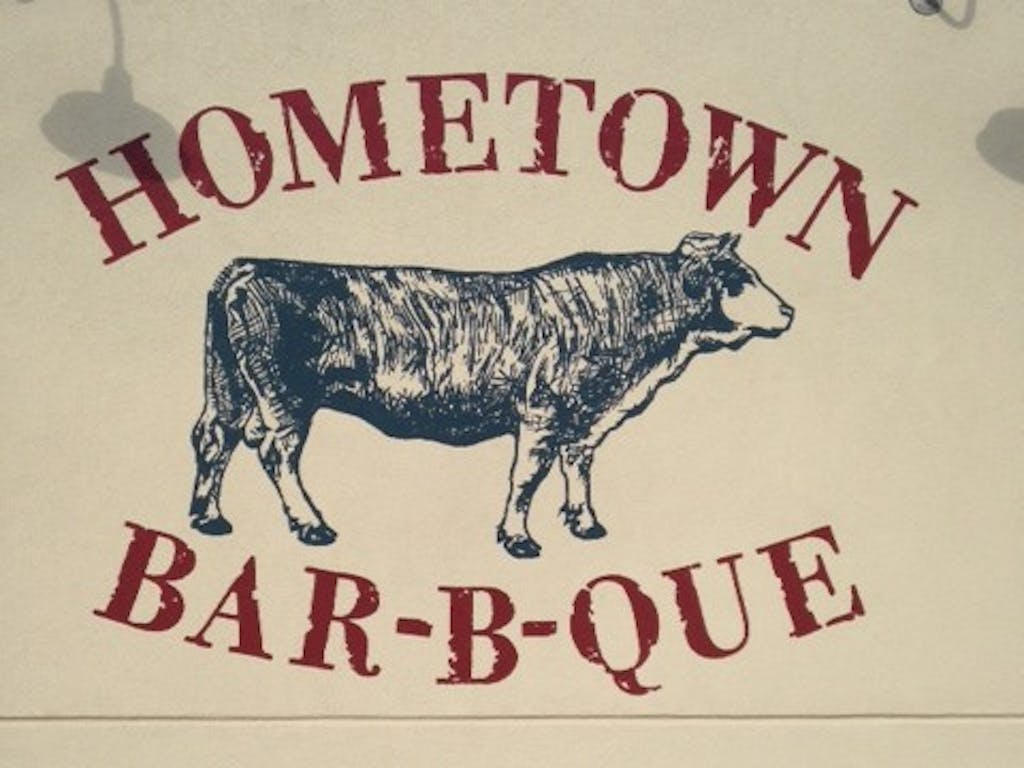 Billy Durney is a native of Brooklyn, so it wasn’t difficult to choose the small Red Hook neighborhood in which he opened his barbecue joint, Hometown Bar-B-Que. He called it “Hometown” because this is where both his grandmothers settled after emigrating to New York. This is where he returned to after traveling the world as a private bodyguard to the stars. This is where he gets to smoke meat in the mornings with a view across the New York Harbor to the Statue of Liberty. This might also be model for future barbecue joints in New York.

The tray of meat came down onto the bar with a Texas-sized thud. It was loaded down with fatty brisket slices, peppery spare ribs, and a mammoth beef short rib so tender you could slice it with a shadow. That’s the Texas side of the menu, much of which Durney learned under the tutelage of Wayne Mueller of Louie Mueller Barbecue in Taylor, Texas. He also took cues from “The Legend” Mike Mills of 17th St. Bar & Grill who teaches a barbecue course at his Murphysboro, Illinois restaurant where Durney and Mueller met.

That platter  was all Texas, but the rest of the menu is more diverse. Lamb belly is simply rubbed with salt, smoked over oak, and served pulled. Or you can get in a lamb belly banh mi with pickled vegetables on a french roll. The pork belly is similarly prepared, and can be served as a taco with sour cream, cilantro, pickled onion, and salsa verde (the tortilla needed work). It’s this combination of flavors that elevates these simply smoked meats from behaving like a style foreign to New York, and instead embracing the bounty of New York’s culinary influences as inspiration.

Durney said that growing up, he was always confronted with a combination of flavors from different ethnicities around Brooklyn, and these are the flavors he’s trying to bring into his barbecue. It’s an injection of creativity like the jerk baby back ribs at Hometown that will you make you thankful for Durney’s eye towards innovation. When he originally opened, he had sweet baby back ribs on the menu that would be familiar to any Southerner. “They were good. I mean, we were proud of them, but after a few months I thought ‘people just can’t be interested in this type of rib anymore. This is boring.'” That’s when he decided an injection of spice rather than more of the same sweet barbecue sauce might do the trick.

The result is a tender rib with all the smokiness you’d expect from a traditional rack of Southern style pork ribs, but it has so much more depth to it thanks to the jerk marinade and the high late heat in the cooking process. With each bite, the spices from the habañero peppers comes through, but that’s quickly stifled by the tingle of lime and the crunch of caramelized sugar on the bark. Turbinado sugar is sprinkled on at the end just before the whole rack is finished over the direct-heat of a charbroiler. The flavor is a moving target – going quickly from that of grilled chicken skin, to Caribbean spice, to smoked pork, and back again. The intermittent brightness of the green onion reminds you that it’s not just a pretty garnish.

Hometown was my fourth of five meals the day I visited last week. I was full, but I couldn’t stop eating these jerk ribs. After picking up the fourth one I decided I needed to set it down and come back another day for a whole rack when I was hungry again. Or I thought maybe I could just make them at home, so I asked for the recipe.

Durney said his only secret is the proportion of ingredients in his jerk marinade, but you can use any host of standard jerk marinade recipes as a basis for your proportions.

Place all marinade ingredients in a food processor and puree together.

Place baby backs in a glass container, cover with marinade, and refrigerate overnight.

Take them off the smoker and wrap tight in foil (shiny side down) and hold them for about an hour in a Cambro (or a beer cooler).

Unwrap and sprinkle lightly with a 3:1 mixture of ground black pepper and turbinado sugar.

Charbroil each rack of ribs for two minutes on each side. Serve.