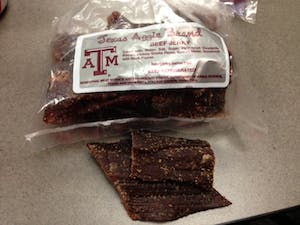 Texas A&M has been making jerky in the Rosenthal Meat Science Center since the 1980’s. It’s one of the most popular items sold out of the school’s on-campus meat market, and even has its own website. I picked up a bag while I attended Beef 101 in June and I got a tour of the entire process by the man behind the jerky – Ray Riley.

The first step is making the curing brine in batches big enough to fill a trash can sized vat. The brine contains mainly water along with seasonings and nitrites which act as a preservative giving this jerky a long shelf life. Lean cuts from the beef round are then cut with the grain and soaked in the brine for a few days. There’s some mixing a couple of times a day, but mainly the concoction is left alone until it’s time to smoke it, dry it, and package it.

Huge industrial smokers are used as racks of hanging beef, now seasoned with black pepper, is wheeled in. The smoke is created by hickory sawdust smoldering on a hot rotating plate and it’s fed into the smoking chamber. Temperatures are closely monitored during the process so as not to dry the meat too quickly. After the smoking, the beef is further dried until it’s ready for cutting and packaging.

The grain of the meat is easy to pick out in the finished product. Cutting with the grain keeps the jerky on the chewy side, but the strips are thin enough to stave off mastication fatigue. There’s a good balance of salt and sweet, but what sets this one apart is the smokiness. It’s provided by both liquid smoke in the brine along with the real smoke from the sawdust. An aggressive kick of heat from all that cracked black pepper is just what’s needed to provide the counterpoint to all that salt and sugar. This is an excellent jerky from both flavor and tenderness, but the boys at A&M don’t really need our endorsement. Back in 2007 the New York Times ran a feature on epicurean jerkies. The Texas Aggie Brand got the spotlight (along with Riley) in the article. A companion blind taste test was also done and the Aggie brand was victorious over six other varieties. Peter Meehan (then with the Times, now creator of Lucky Peach) said of this jerky “The curled husks looked like the bark harvested from a magical meat tree.” The New York Times loved it six years ago, and so do we.

Aggie Brand Jerky barely squeaks by the previous winner – Cooper’s beef jerky – and is now at the top of the Jerky Heap.