Update: This joint is CLOSED. Pitmaster John Mueller was unceremoniously relieved of his duties by his sister LeAnn Mueller who owns the place. She has reopened with the new name La Barbecue. I’ll give the new joint a try next time I’m in Austin.

2012: After several visits and bringing a dining companion by the name of Anthony Bourdain and his camera crew with me for a meat fest at John Mueller’s place a few months back, let’s just say that John knows me. We have each other’s cell phone number, and he sent me a Christmas ham, which I promptly enjoyed with impressed dinner guests. I preface all of this to tell you just how pleased I was when, during a surprise visit wherein I was hoping to sneak in unnoticed, I was able to pull it off. My wife and I were headed to an event in Wimberley when I decided to do a drive-by of the JMueller BBQ trailer on our way through Austin. At 12:45, there wasn’t the normal string of folks waiting to order, so I made a beeline for the trailer where I found meat carver and pit protege Ali working the front counter instead of John. My tray was soon full of beautiful smoked meats as I rounded the corner of the trailer to pay and say hello to John who was sitting with a couple friends drinking a cold one. We both laughed, and I retreated to a picnic table for my generous snack. 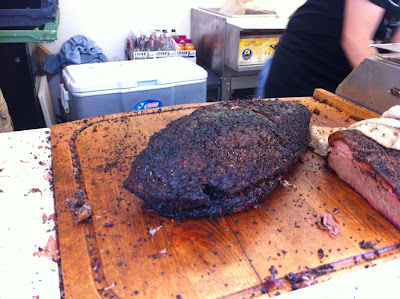 When the brisket above is sitting on the counter as you walk up, you know you’re in for a good meal. A couple of thick slices of the fatty beef had a soft interior of smoky meat and tender fat while the thick bark on the exterior was stout and even a bit crispy. On a previous visit I was more enamored with the lean beef, but on this day the moist brisket was easily its equal. One item that had improved considerably was the homemade sausage. The formerly chewy casing and greasy filling had made way for a taut casing with a great snap and a well-seasoned and cohesive filling. The beef rib had little room for improvement and it was, as always, one of the best beef ribs anywhere in the state. It may be the most consistent cut of meat here and rarely fails to impress. 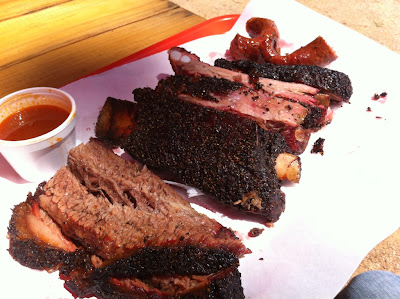 Since my last visit, the recipe for the pork ribs has been adjusted. Gone are the chewy ribs overwhelmed by pepper. They have been replaced with well-smoked spare ribs with exemplary juiciness and tenderness. Another addition is a sweet glaze similar to the one you’ll find at Smitty’s, in Lockhart. It doesn’t overshadow the meat like a candy coating but instead adds a pleasing counterpoint to the heavy black-pepper rub. I could have eaten a full rack. 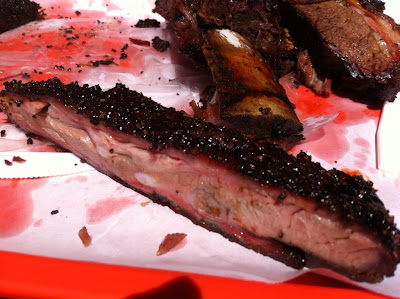 When I return to a five-star joint to see if they have earned the sixth, what I’m looking for is a repeat performance of the previous experience. Consistency is more important than being able to wow someone beyond expectations every once in a while. John insists that his real desire is to please that regular customer who comes by once a week and expects the same great meal he had the week before, rather than trying to please the food critics like myself that swoop in now and again.I can’t speak to John’s weekly performance, but I can say without a doubt that the barbecue here improves with every visit I’ve made. At this rate, I’ve got to wonder where the ceiling is.