If great barbecue were all about patience, John Mueller would be out of a job. He hasn’t got the time for the low-and-slow version of Central Texas barbecue served up most everywhere in Austin. Mueller hammers the meat with intense heat from a blazing firebox. The beef in his smoker will never know the gentle heat of a marathon overnight cook. Mueller arrives at the pits at 2:45 a.m., and lights a fire big enough to abuse briskets into submission. They’re done in 5 or 6 hours, and served piping hot. Steam escapes from the sliced beef as if the meat is still gasping to recover from the sprint. This is John Mueller-style barbecue, and he has no plans to change it at the new Black Box Barbecue trailer in Georgetown.

Mueller learned the trade from his father, Bobby Mueller, at Louie Mueller Barbecue in Taylor. Bobby tried to instill his patience with barbecue into John’s cooking, but it didn’t take. “It would drive him crazy every time I lifted that lid,” Mueller told me. When asked about the old adage “If you’re looking you ain’t cooking,” John laughed. “Not when you’re burning 400 degrees.” It’s the way he’s cooked since opening his own place in Austin in 2001. His barbecue style hasn’t changed since then, although he’s struggled to stay in business. John Mueller Meat Co. in Austin was the latest casualty. After a three-year run it was seized for non-payment of sales tax. A few months later he was working on his next barbecue chapter outside of Austin.

The Black Box Barbecue trailer opened to the public in May. It’s parked in downtown Georgetown, which has been less than welcoming to permanent food trucks, right next to the historical marker commemorating the founding of the city. Mueller’s name is on the trailer, but his role has shifted from owner to celebrity pitmaster. He says he’s now an employee who won’t be dealing with the books, which are left to co-owners Justin Bohls and Gary Brown. They’re planning a brick-and-mortar barbecue joint on the same lot. That bodes well for the fans of the John Mueller style of cooking. Plenty of them were in line on a recent Thursday, and from what we ate, Mueller is back on his game.

Beef ribs are Mueller’s signature cut. On Thursday and Friday, he’s cooking the same chuck short ribs that he served in Austin. The more fashionable, and larger, plate short ribs are served on the weekends. A layer of fat on the chuck ribs had crisped into a beef chicharron from the high heat of the pit. There was an audible crunch as my teeth cut through it to the tender meat below. The amply fatty cut remained juicy even as it rested on the tray for several minutes. Let it sit, and start instead with the brisket ($20/lb), which is less forgiving. Because it’s served so hot, the slices of Choice grade beef (Mueller bumped up the quality from his usual Select grade beef) will dry out on you pretty quickly after it’s cut. Since all the dining is outdoors, the effect is exaggerated with a stiff breeze. The black pepper in the bark bit back, and the outer edges of fat had turned pleasantly crunchy. Every bite, with a bit of fat and bark in each, became a reminder of John Mueller’s good days in Austin.

The pork ribs have changed a bit. The sweet glaze is muted, and he cooks them on a smaller pit that runs a little lower than the big beef pit. The target seemed to be more tender spare ribs with less of a crust, but they were just-undercooked instead. “I’ve never cooked this much in my life,” Mueller told me, but he’s still making his own sausage. The beef links, seasoned heavily with black pepper, were smoked alongside the ribs. The natural pork casing had a pleasant snap, and it’s a steal at $4 for a generously sized link. A dunk in the sauce made it even better. Fans of the thin Mueller sauce with bits of onion floating around will find a more refined version here. It’s got a new smoothness, but still with a good heat to it and plenty of beefy flavor.

The smoked turkey breast is a lesson in austerity. Like most everything else here, the rub is simple salt and pepper. There’s no brining or butter-dipping. It’s just juicy white-meat turkey, with a good dose of smoke. I loved it.

That sauce was an unexpected hit with the potato salad too, not that it needs it. The classic mustard-based version is a hearty classic, but a local dining companion convinced me to add a dab of sauce. That moved it into the realm of unforgettable, which is hard to do with potato salad. Mueller’s other sides will be familiar to his fans. The spiciness of the Sriracha slaw keeps it from being refreshing for me, and the pinto beans are as simple as they get. I prefer the cheesy squash. It’s like a gluten-free version of mac & cheese, and you might even be able to convince yourself that it’s healthier.

Mueller started off great at John Mueller Meat Co. in 2013, and the barbecue here tastes like it did in those days. He agrees that the barbecue quality really suffered as he got near the end, so I asked how he plans to keep focus now that he’s gotten another chance. “Seven months broke isn’t that much fun,” he told me bluntly. Mueller also said the change of scenery to Georgetown has done him well, “and the food shows.” He couldn’t help but add, “My plan is to be back on top.”

A couple years ago, Mueller told me in an interview, “Grunts like me just cook meat. We’re not innovative.” Even with a new owner in place, Mueller sticks to his self-deprecating guns. We’re in the age of “craft” barbecue, with its Prime grade beef, upscale sides, and desserts that aren’t scooped out of a tub. Mueller doesn’t attempt to compete with that, and it’s not out of some nostalgia play. It’s all homemade, but he keeps it simple. This is how John Mueller cooks barbecue. With some cheap beef, a little salt, and a lot of black pepper, he makes a convincing case that there’s another right way to do it. 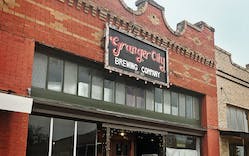 John Mueller Is Back (Again) at Granger City Brewing 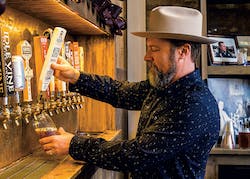 Hip to Be Square in Georgetown 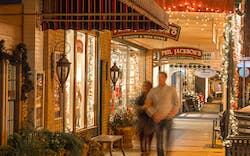 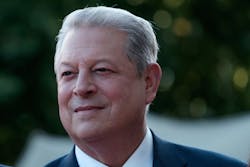