If there’s a dark prince of Texas barbecue, it’s probably John Mueller, the famously irascible, hugely talented, at times erratic master of meat who left his family’s legendary joint—Louie Mueller Barbecue, in Taylor—and set out on his own in 2001 with John Mueller’s B-B-Q, on Austin’s East Side. By 2003, that joint had acquired both a fanatical following and a spot on our top fifty list. The briskets were the best in town, and John was famous for handing out a gratis nibble just as you neared the counter (a famous Louie Mueller touch). But in 2006, a rough patch led to John’s losing his restaurant. He disappeared for a while, only to pop back up at JMueller BBQ, a trailer eatery in South Austin, in 2011. The joint was a partnership with his sister, LeAnn (who, full disclosure, is a Texas Monthly contributing photographer). It was excellent, and John’s funny, profane Twitter presence (he’s @ShoelessJoeJaxn) gave the place an appealingly renegade quality. Unfortunately, just as it was beginning to build a solid reputation, a major spat between the siblings caused John to decamp once again. LeAnn changed the name to La Barbecue and didn’t miss a beat. Her brother kept quiet for a spell, only to resurface this spring with his new joint. Meanwhile, LeAnn’s other brother, Wayne, continues to man the pits in Taylor, as he has since 2008. This means that the three children of Bobby Mueller, perhaps the greatest pitmaster in Texas history, now all have their own joints, all within a one-hour drive. Sibling rivalry never tasted so good.

John’s joint, which debuted in February on a lot in East Austin, is the newest of the three. It consists of a large pit on a red flatbed trailer, a food truck to one side, and some picnic tables under a blue-and-white tent. As always, customers line up like eager schoolchildren, and as always, the meat is outstanding. On our last visit, the beef ribs and fatty brisket tied for best in show. The oak smoke had penetrated deeply, giving each bite fathoms of flavor. Mueller gets a crust on his meat that’s a little more delicate than some others, although it still looks like it was dredged in black pepper. The lean brisket and the pork ribs were great as well, and we were blown away by the pork shoulder. It has a gorgeous, chestnut-colored exterior, lightly brushed with a sweet glaze that subtly hints at a Southern allegiance. The rosy meat contains a world of complex tastes. As for the sauce, a thin and nearly translucent brew, with hints of tomato and a ton of black pepper and sweet onion, it’s out of this world. Order an extra portion and eat it like soup. 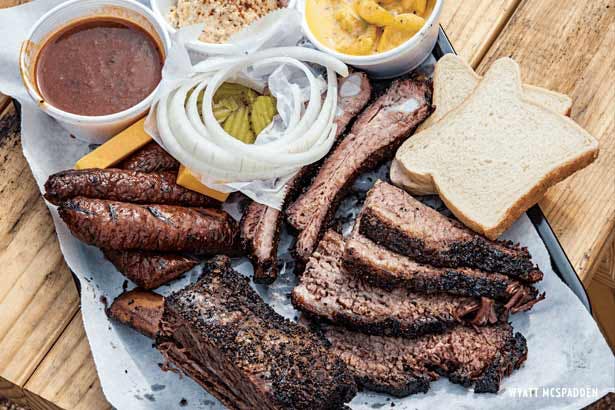