To the people of Corpus Christi, I’m sorry about your barbecue. I tried just about every joint in the city a couple of weeks back, and there wasn’t much good news to report. There was one bright spot, though: Julian’s BBQ.

With a black cowboy hat, a black shirt, and a red bandana up over his nose, Julian Zapata feeds live oak logs into two steel pits that sit just behind the ordering counter of his restaurant. A huge exhaust hood sops up all of the smoke his pits throw off. This prominent display tells you everything you need to know about how the barbecue is cooked, and all the black pepper and butcher paper-clad briskets further illustrate that he’s adopted many of the recent Texas barbecue trends.

One such trend is the adoption of the monster beef short rib. It takes such a starring role at Julian’s that it was the feature of the first commercial for the restaurant, a 72-second spot of a man in a V-neck sweater vest devouring a beef rib. Thankfully, they didn’t include the audio. 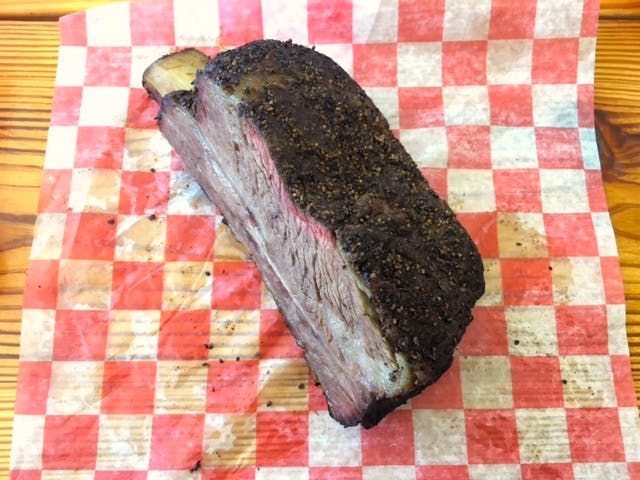 The beef rib at the restaurant is even bigger than the one in the ad. It’s a visual beauty, no doubt, but it could have been more tender, and its flavor could be improved upon with a lot more salt and a little less pepper. Regardless, it was a solid effort. The same can be said for the brisket. Upper choice and prime briskets go into the smoker, and both the fatty and the lean side come out juicy. 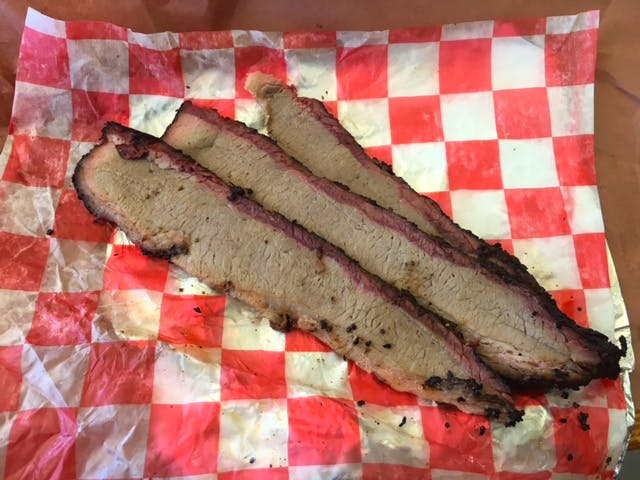 It was three in the afternoon when I visited, so it’s no big surprise that the chicken was dry. It had good smokiness, and probably would have been great at noon. Stout pork ribs held up better. Salty meat, a peppery bark, and good smoke gave the meat a pleasing hammy flavor, and it was just tender enough. 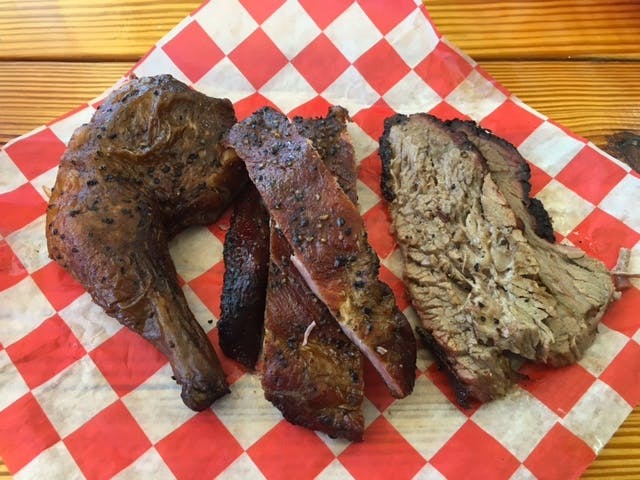 The meats all scream Central Texas, but the sides are from further south. Rice and beans both were a great complement to the meal, and the requested tortillas from a local tortilleria can replace standard white bread. Ask for them.

After the meal, Zapata proudly showed me around the kitchen, which used to be a car wash. He dug into the thick concrete floor to place his pits. The dining room is a former washateria. I’d say he’s found a better use for both.

I also took note of the photos on the walls of his restaurant—from Lockhart, Llano, and Austin—and considered them a sort of abbreviated roadmap to where Zapata has traveled for barbecue (though he told me that Snow’s BBQ in Lexington is his favorite) and a compass for the direction he hopes to take his barbecue.

I also am compelled to note that I arrived later in the day than I had hoped to, which means I probably didn’t get Julian’s best showing. Despite this, the barbecue was still remarkably good and I enjoyed what Julian had to offer. So while I am somewhat hesitant to write review based on a single visit, I wanted to tell Corpus Christi’s denizens about a place that I have high hopes for. But I will practice some restraint and refrain from giving Julian’s a specific rating—yet. In place of a star rating, I will say that Julian’s is a good barbecue joint with the potential to be great. And, to my mind, it’s already the best barbecue joint in Corpus Christi.