This Friday will mark the 150th anniversary of Juneteenth, a celebration of Emancipation Day in Texas. It was on June 19, 1865, that Major General Gordon Granger assumed his position as the appointed military governor of Texas after landing in Galveston the day prior. Five general orders were announced and published two days later in the Galveston Daily News. For the 250,000 slaves in Texas, it was General Order Number Three that held the greatest and most important news:

The people are informed that, in accordance with a proclamation from the Executive of the United States, all slaves are free. This involves an absolute equality of personal rights and rights of property, between former masters and slaves, and the connection heretofore existing between them, becomes that between employer and hired labor. The Freedmen are advised to remain at their present homes, and work for wages. They are informed that they will not be allowed to collect at military posts; and that they will not be supported in idleness either there or elsewhere.

It had been two and a half years since Lincoln’s Emancipation Proclamation took effect, but the slaves in Texas were finally free. According to a new historical marker in Galveston, at the site where Granger would have made the public announcement, celebrations commemorating “Emancipation Day” were observed starting in 1866. It would later come to be known as Manumission Day, Jubilee, and then more commonly as Juneteenth, a portmanteau of “June” and “nineteenth.”

Just like for the Fourth of July, food and drink have long been central to Juneteenth celebrations, barbecue being a common cuisine served at picnics and parades. Barbecue historian Robert Moss noted the connection in his book Barbecue: The History of an American Institution. “One constant was the barbecue pit, which always took the central place at the festivities.” An account published in 1871 in The Reformer, an Austin newspaper, announced a celebration “to take place at the barbecue grounds.” In Hempstead in 1886 “a big barbecue dinner was spread for the multitude,” and three years later in Cleburne there was a parade, where patrons “met at the grove to enjoy a basket dinner and barbecue.” Preparations for the 1892 celebration in Austin included barbecue according to the Daily Statesman, an occasion where “the preparation and sharing of food was the main attraction. In keeping with convention men barbecued the meat, and women prepared the remainder of the food.” In Brenham, just after the turn of the century, it was reported that “a large crowd of negroes met at Oak Grove Thursday and celebrated the Juneteenth. A big barbecue was prepared and some two hundred joined in the slaughter of meat.”

In the previous report from Brenham, notice the early usage of “Juneteenth.” That particular term didn’t become the common usage for decades after the first Emancipation Day celebrations, and in fact, the first printed use of it I could find was in the Galveston Daily News on May 22, 1890 (this was a reprint of the black-owned Beaumont Recorder, and even then it was used in quotations). 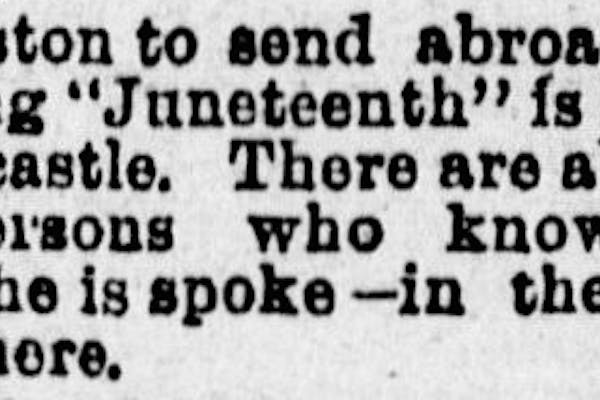 Barbecue wasn’t the only item on the menu. The middle of June being the beginning of watermelon season in Texas, that also found a spot at the table. The Galveston Daily News reported on celebrations across the state in 1883 including one in San Antonio where “twenty-three wagons loaded with watermelons … were destroyed with marvelous rapidity.” By 1933, the menu had been cemented per the Dallas Morning News. “Watermelon, barbecue and red lemonade will be consumed in quantity.”

Red food and drink have been associated with African and later African American foodways. As food writer Michael Twitty explains on his blog Afroculinaria, “The practice of eating red foods—red cake, barbecue, punch and fruit—may owe its existence to the enslaved Yoruba and Kongo brought to Texas in the 19th century.” Accounts of drinking red lemonade or red soda water were generally mentioned in early accounts of Juneteenth. Big Red, first bottled in the thirties in Waco, then became the de facto red soda water for the African American community in Texas, especially for Juneteenth celebrations. The common connection between Big Red and Juneteenth, and Juneteenth and barbecue is partly credited with the ubiquity of Big Red at Texas barbecue joints.

“Eight hundred pounds of barbecued meat was donated by Tom Mason, one of the business leaders among the negroes, for the hungry mob at noon Friday,” reported the Fort Worth Star-Telegram in 1914. Tom Mason created Douglas Park in Fort Worth as a meeting place for African Americans on Juneteenth and any other day. It was used the following year to mark the fiftieth anniversary of Emancipation Day. The importance of the day was noted by Texas governor James Ferguson, who gave executive clemency to 32 black prisoners in the state penitentiary, and 8 women held at Fort Worth’s police headquarters were given their freedom for a day to celebrate.

Barbecue continued to be central to Juneteenth in the twenties and thirties. Barbecue man Pappy Williams shared his memories of the celebrations around Big Sandy in a 1979 interview by the Fort Worth Star-Telegram. He said people from around Upshur County would bring him cattle, hogs, and goats the day before Juneteenth:

We’d eat barbecue, drink pop – there wasn’t no such thing as beer or nothing unless you made it yourself…We’d start barbecuing that day and go all day, all night and right up to noon – and I stayed right with him.

Just as important as the menu were the spaces used for Juneteenth celebrations. In a segregated society it wasn’t always easy to find a space where large groups of former slaves could congregate in public. As mentioned, Douglas Park in Fort Worth was used until the city opened Forest Park Zoo (now the Fort Worth Zoo) to African Americans for one day a year, on June 19. Fair Park in Dallas was opened under the same conditions. Communities in Houston and Austin both built their own Emancipation parks, as did tiny Mexia.

Mexia’s celebration, the longest-running in the state, takes place at Booker T. Washington Park just west of town in a spot formerly known at Comanche Crossing. The original thirty acres of the park were purchased in 1898. Despite a tragic drowning of three boys in the hands of police in 1981, a tabernacle burning in 1988, and a dance hall a year later, the celebration resumes. But barbecue isn’t as big a part of Juneteenth in Mexia as it once was. Lolis Elie attended the festivities in 1993 and recounted the experience in his book Smokestack Lightning. He was saddened by the declining interest in the holiday, and the lack of understanding of the meaning of Juneteenth by the raucous revelers he witnessed at night. “These elements – the spiritual dimension, the respect for tradition, the reverence for the occasion, and of course the barbecue – are now in gross disrepair. They are pining away, unmourned and largely unmissed.”

Elie’s sentiments in 1993 echoed the words of the Dallas Express ninety years earlier. As Dallas’s black newspaper at the time, it was less than impressed with what Juneteenth had become in Dallas in 1903. “The time has come in Dallas when the Juneteenth celebration has about gotten down to a contest over the question as to who will sell the beer to the crowd. Unless it rises above this dirty plane it should be stopped for the celebration is a farce, a veritable nuisance which should be abated.” Oddly, the Fort Worth Star-Telegram and the Dallas Morning News were mostly cordial, if a bit condescending, in the coverage of Juneteenth festivities in Dallas. That would change a couple decades later.

“Many lawns went unmowed, many beds unmade and many shoes unshined in Dallas Saturday while a large proportion of the negro population took the day off for ‘Juneteenth,’ their own special holiday,” reported the Dallas Morning News coldly in 1926. This privileged whining persisted in 1934 when the rich were forced to dine at the Dallas Country Club, which hosted a “Maid’s Night Out” dinner. The following year it was the Dallas Morning News again with a tantrum. “Housewives of the city will do their own dishes; shrubbery will go unpruned, and all those jobs usually done by Negros will for the day be dropped. Prepare only to open purse strings for advance of cash!”

None of those qualms seemed to matter in 1936. As William H. Wiggins explains in his essay in the book Juneteenth Texas, “The 1936 Juneteenth celebration attracted an estimated 150,000 to 200,000 celebrants to Dallas to celebrate the State of Texas’s Centennial and the seventy-fifth anniversary of Emancipation.” Dallas’s Fair Park was packed with revelers, some of which got to see Cab Calloway perform. A thirty-minute segment of African American folk music from the celebration was even broadcast nationally on NBC.

In 1940, it was performer Louis Jordan who brought Juneteenth into the greater popular culture. He recorded Juneteenth Jamboree that year, with lyrics that referred to General Granger as “a hip cat.” The chorus continued:

That would be the height of Juneteenth for a while. It languished for several decades because of the war and during the Civil Rights movement. Many African Americans refused to celebrate on their given day in public spaces allowed to them only one day a year. In 1961, the Fort Worth Star-Telegram reported that “not a barbecue or a picnic was scheduled for Fort Worth’s Negro community as a whole, and the traditional 19th of June rodeo has been deferred to July 4.” 1965 marked the one hundredth anniversary of Juneteenth, a year after the Civil Rights Act and the same year as the voting rights bill was signed, but interest in Juneteenth dried up. It remained that way until a renewed interest turned it into a state holiday.

In 1979, Houston representative Al Edwards introduced legislation to make Juneteenth a state holiday. It passed despite opposition from fellow African American, Dallas’s Clay Smothers, who equated the designation to “ceremoniously grinning and busting watermelons on the Capital grounds.” Despite Smothers’s protests, most in the black community saw this a watershed moment. The recognition of the importance of this day came 115 years late, but it came.

The day the bill passed a few watermelons were ceremoniously consumed on the Capital lawn, but no barbecue. In fact, barbecue’s central role in Juneteenth seems to be waning. You’ll still find plenty of grills and smokers fired up for backyard celebrations, but the central figure of the barbecue pit at public Juneteenth functions is all but gone.

Warren Britton with the Nineteenth of June Organization in Mexia said the barbecue pits at Booker T. Washington Park on Comanche Crossing aren’t used any longer. “Disrepair and people bringing in larger pits stopped the use of the site-built pit,” he told me via email. “There is an individual who won the bid to sell barbecue this year,” rather than it being cooked as a community event the way it was decades ago. But he adds that “barbecue has always been an important part of the celebrations and a constant. People of all races make the yearly pilgrimage to Booker T. Washington Park for the barbecue and fellowship during the Juneteenth celebration.”

In its history, Juneteenth has grown from a state holiday to a national celebration. No longer is it only Texans who celebrate an emancipation that was two years tardy. Californians celebrate with jazz and there are dance performances in Boston, but I’d suggest you come to Texas to commemorate this thoroughly Texas-rooted holiday, and do it with some barbecue.

A few ways to celebrate Juneteenth 2015 in Texas: