A new Kreuz Market doesn’t come along very often. They opened their doors in Lockhart as a meat market in 1900. In 1924 they moved to a new building, currently occupied by Smitty’s Market. They moved once again in 1999, thanks to a well publicized family tiff, to their generously sized brick building just across the tracks on the north side of Lockhart. There’s no record that I could find of how the pits were re-lit back in 1924, but news crews showed up to document the event in 1999.

Back then, Pitmaster Roy Perez and Lehman Schmidt slid a metal trough full of coals down Commerce Street from Smitty’s to the new building. Fifteen years later, a similar exchange still included Perez, but this time they required a pick-up truck to take the coals from the pit in Lockhart to a new location of Kreuz Market two hours away in Bryan.

At 12:15 on Wednesday afternoon, Roy Perez filled a modified bucket with a few shovelfuls of coals. I forgot to ask if it was held in the same metal trough from back in 1999, but the event in Lockhart was decidedly hoopla-free. Former Kreuz Market owner Rick Schmidt (he has since sold it to his son Keith), was acting as fire courier and was anxious to get on the road. There was a 4:00 ceremony planned in Bryan that he didn’t want to be late for. 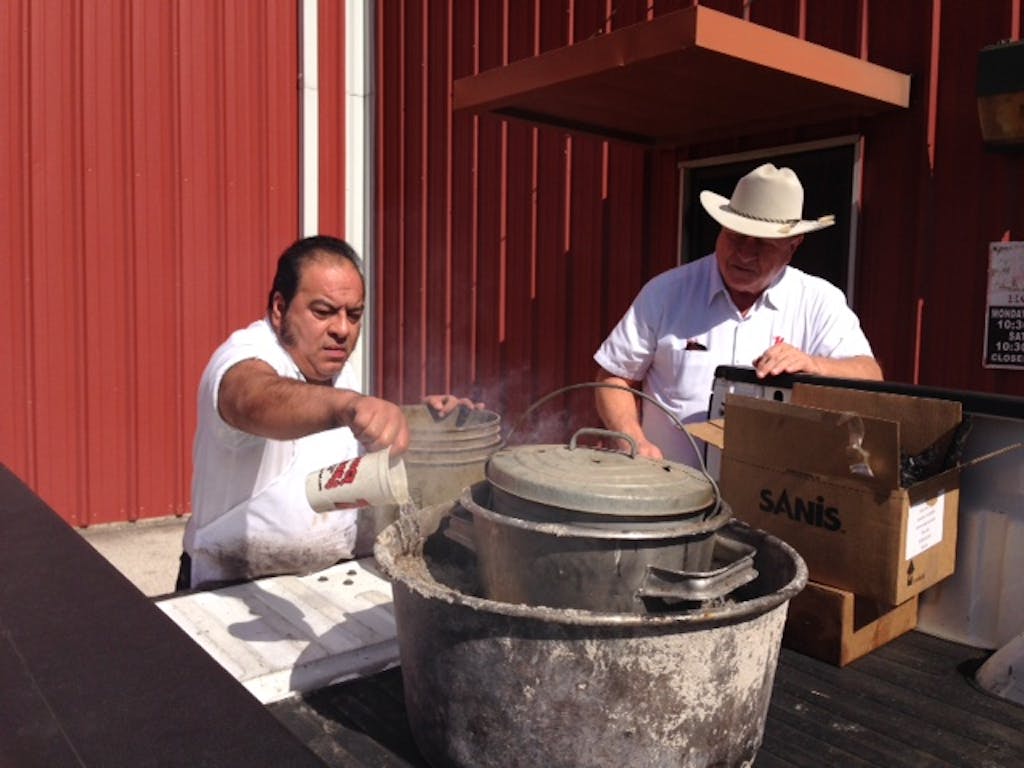 I didn’t follow him on the drive over, but Schmidt said he sure got some looks at every stop light. “It wasn’t really smoking when the truck was moving, but as soon as I would stop, poof.” He was unsure about the legality of this delivery, and nervously checked his registration and inspection tags along the two hour drive. “I was just hoping for green lights so I didn’t have to stop again.” 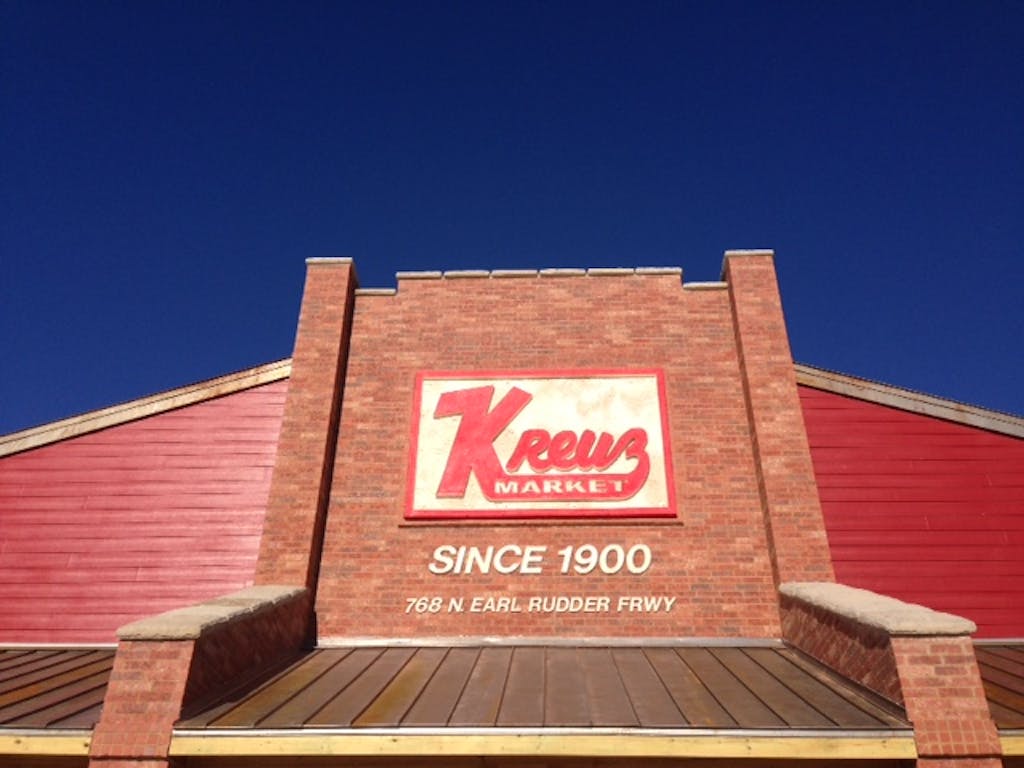 Cameras were flashing in Bryan as the coals were unloaded. The centerpiece brick pit was still cold, awaiting its well traveled resuscitation, but a couple Bewley smokers had already been hard at work so the gathering crowd could be fed. Samples of brisket and pork ribs were passed around, but the most popular item was that famous Kreuz Market sausage. 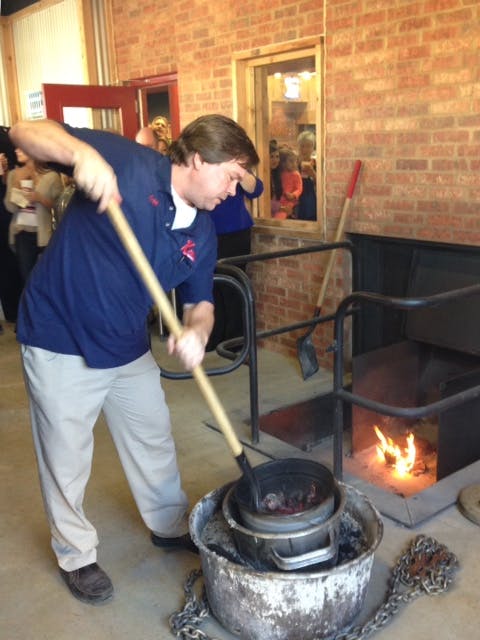 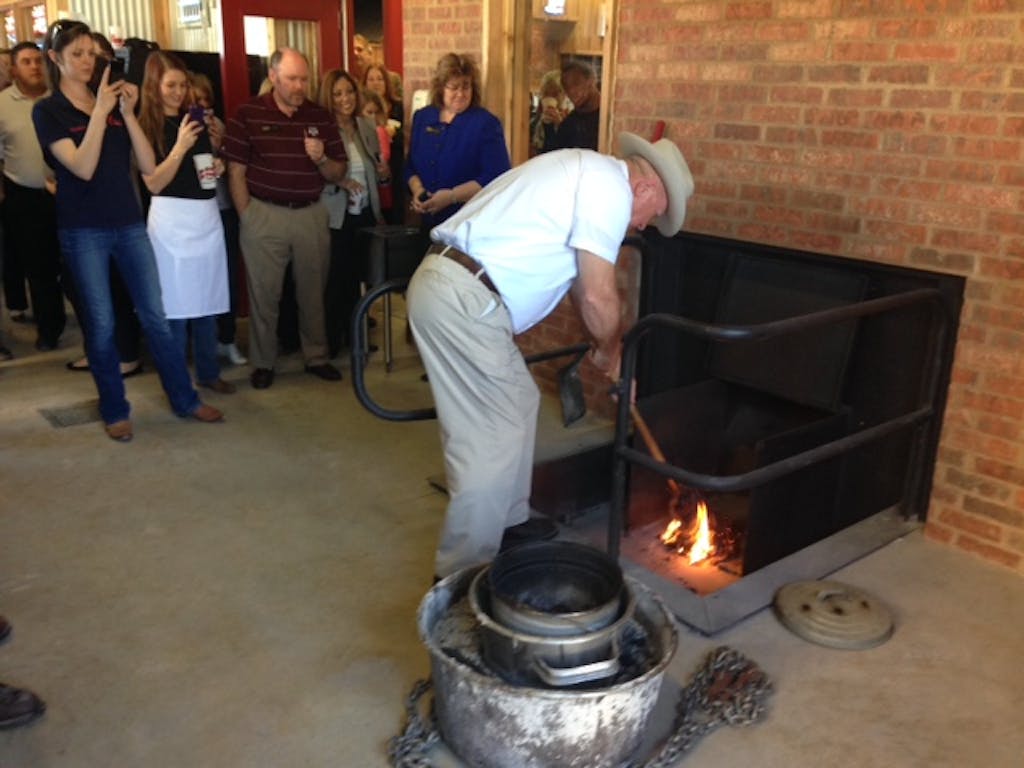 At 4:00, the crowd already warmed by Shiner Bock and jalapeño cheese sausage, surrounded a cold, empty pit. Owner Keith Schmidt was the first to add a shovelful of coals. His father Rick followed, as did the new keepers of the flame in Bryan – Lee and Marco. Bits of kindling and a few logs were added, and a new fire emerged.

The doors open at the new Bryan location for good on Monday. The Schmidts are excited about the new venture into unchartered waters, but they expect the food to be as good as the Lockhart original. Naysayers have already pointed out that the brand new pits require some seasoning before that can happen, but at least they know the fire that burns has some history.