“The Best Barbecue, Period.” That’s the motto Ronnie Killen has printed on the shirts that he and his staff wear, putting a daily target on every one of their backs. Making that declaration even after a good run of success toes the line between confidence and arrogance, but Killen had them printed while still serving his pop-up customers, five months before he opened the doors of his new restaurant. It was just plain cocky. I admire it.

I first tasted Killen’s barbecue at the Houston BBQ Festival in March of last year. A week later he started a pop-up at his well-respected steakhouse in Pearland. It got some rave reviews, and the barbecue I sampled in their first month was certainly promising, but Killen wasn’t aiming for promising. Earlier this year in a conversation with the Houston Chronicle, he made his target clear. He recounted a statement he made to Aaron Franklin of Franklin Barbecue in Austin. “You’re going to hear about me because you’re my benchmark. I’m coming after you.”

I was in Houston for another barbecue event in February. Killen’s Barbecue was just three days old, but I had to get a look. From all the praise that had flooded in over those couple of days prior, the expectation was that I would be rewarded with the finest smoked meat in the Houston area. The menu was as vast as the chasm between the quality of Franklin’s brisket and Killen’s on that day, but it was still early.

In late May, Texas Monthly organized a barbecue bus tour through Houston with a stop at Killen’s. The staff served enough trays full of barbecue to feed sixty, and it was impressive. Those on the tour (myself included), mouths full of sausage and beef ribs, moaned with satisfaction. Pepper-flecked pork ribs were almost as juicy as the sausage, and I made three trips to the dessert table. To be fair, there were four desserts to choose from. Then there was the brisket. It was the kind of smoked beef Killen could go into battle with.

Last Friday, I flew down to Houston for a quick-strike barbecue day trip. Our party of four arrived at 10:00am and two people had beat us to the front of the line. A ticket dispenser sat next to the door, and every one in line is expected to take a number. The system is set up so you aren’t required to stand in one spot for an hour or more waiting for the doors to open. Theoretically, you could swoop in to take the first number, then go get a coffee or run some errands before getting back a few minutes before 11:00 to claim your spot at the front of the line. Surrounded by chatty barbecue fans, the hour went by quickly, with some assistance by free cups full of beer (tips encouraged) that are delivered by the staff. 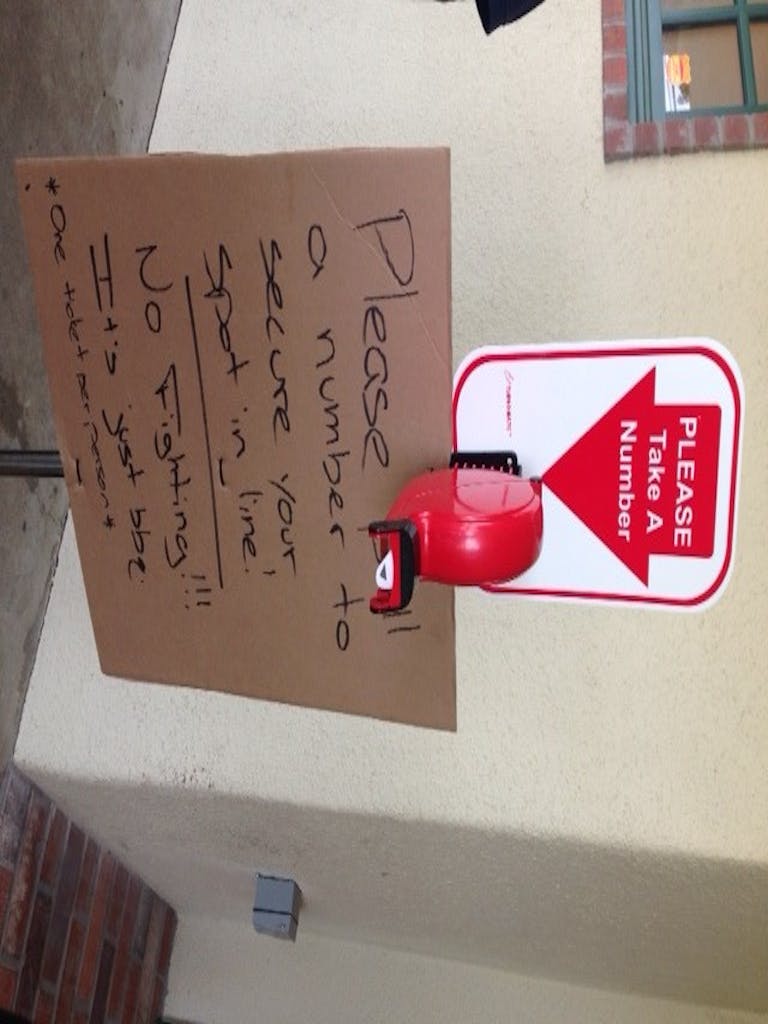 The ordering system is straight-forward cafeteria style – fitting, considering that this building was once a school cafeteria. Killen is usually at the carving station along with other staff members slicing away to keep the line moving. I wanted the whole menu, so the order came out in rapid fire. Killen erred on the side of too much rather than not enough, so a request for a pound of brisket became a pound and a half, two slices of turkey became four and I got double the sausage that I wanted. It didn’t go to waste. 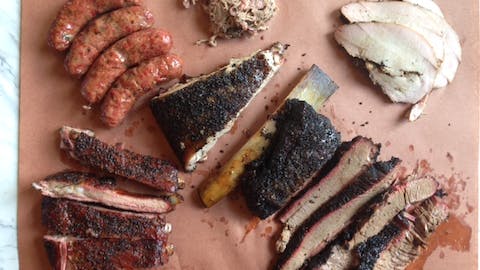 Walking to the table I was reminded that good barbecue can also be served in an air-conditioned building with real bathrooms. I don’t mind eating outside (as is required in many of Austin’s great barbecue joints), but the luxuries (has it come to that?) here are welcome. Seated comfortably without a bead of sweat on the brow, it was time for a tour through the menu.

Sides – The slaw was crisp and lightly dressed. Mustard lovers only will appreciate the potato salad, but you won’t hear a complaint that it’s bland. I preferred the peppery pinto beans to the baked beans, but I couldn’t choose a favorite between the creamy macaroni and cheese and the freshest tasting creamed corn that I can remember. 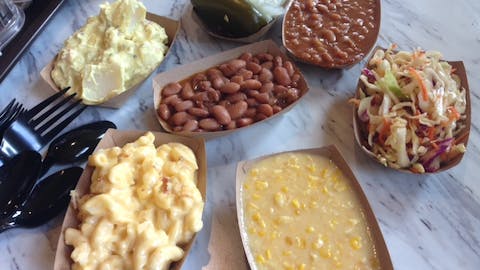 Sausage – There is an original version and a jalapeño sausage available, but you won’t find much difference. They both pack the heat. The original version is a beef and pork blend with red and black pepper. Adding the jalapeño was barely noticeable. Every link was bursting with juice and had a nice snap. Despite their pale color, there was just enough smoked flavor present. 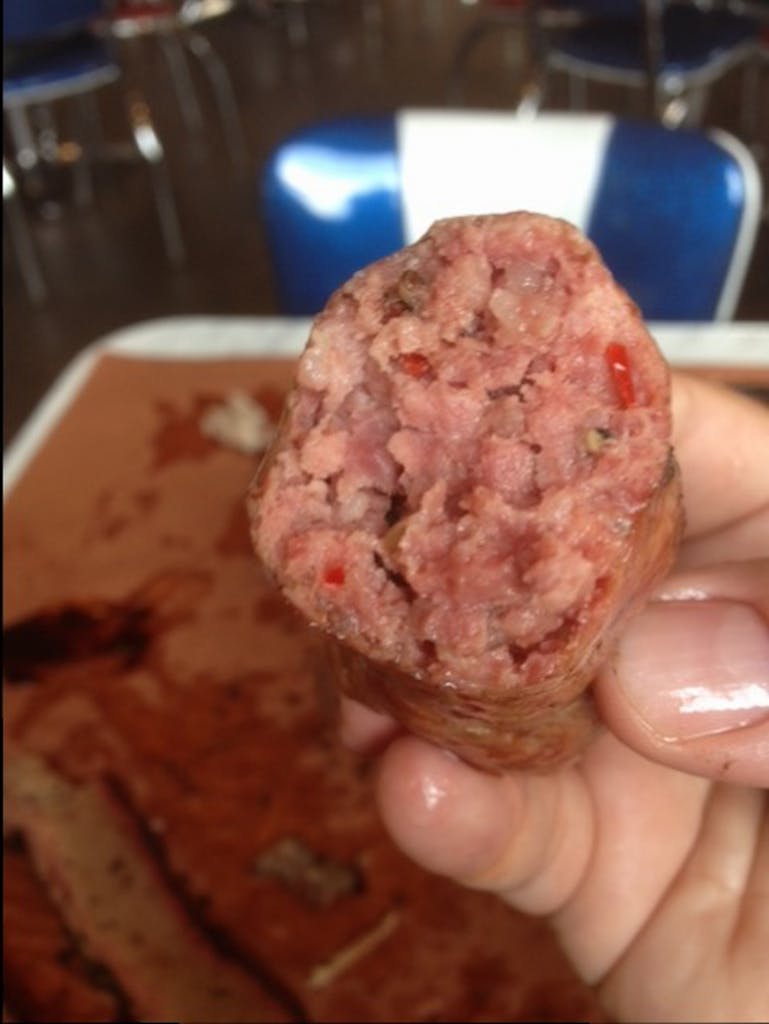 Turkey – I’ve consumed plenty of good and bad turkey, but it’s not usually a stunner. At Killen’s, the turkey is remarkable. Moist slices have the boldest black pepper flavor of any meat, and lots of smokiness too. I might even consider a poultry diet if I could get to this smoked turkey on a daily basis.

Bone-in Pork Belly – For the anatomically unaware, the pork belly (which is where bacon comes from) is attached to the lower portion of the rib cage. When the ribs are removed, they are called spare ribs. When the ribs are left on it’s called heavenly. That is, if all those layers of fat can be adequately cooked.

The additional lean meat of the spare rib brings a new dimension to smoked pork belly. The outer edge tasted like peppered bacon, while the interior was full of the juiciest pork imaginable. At a couple inches thick, it’s a showpiece, but every inch is worth savoring. This is one item that should be on every order at Killen’s. 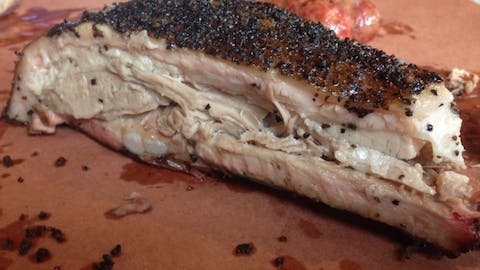 Pork Spare Ribs – There’s nothing tricked up about these big spare ribs. They serve as a rugged counterpoint to the belly, with grown up flavors of just salt, pepper, and smoke. The mahogany bark created a protective layer of the tender meat beneath. Only a slight tug was needed to separate meat from bone, and plenty of discipline was required to not grab another.

Pulled Pork – Maybe the rest was so good that this one just didn’t register. It was more wet (with sauce) than moist, and the smoke flavor was just a wisp. It was hard to find any real fault with it, but it doesn’t bring any excitement to the palate like the rest of the menu.

Beef Rib – Killen played around with multiple beef rib options until he settled on these plate short ribs. This is the only meat that is served exclusively by the pound, and this one weighed in at a full pound. The peppery bark was thick, almost rigid, but the beef beneath was pull-apart tender. The two textures together made for one great bite, or several. 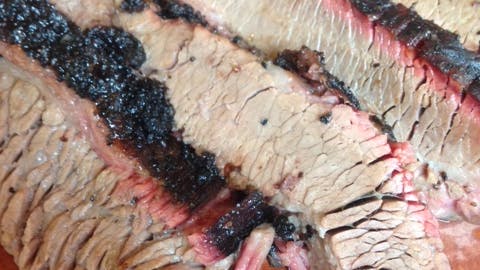 Brisket – It’s the smokiness that it most evident here. In these days of long offset smokers being tuned to evacuate air like jet engines, sometimes a good layer of smoke is shot right out the flue. Killen’s brisket has that smoke, and a great bark, and a restrained amount of pepper. I love black pepper more than most, but the trend has been to pack it on so thick that it sloughs off onto the butcher paper before you’ve had a chance to take a bite. It was the salt that came out most in this seasoning blend.

Another remarkable quality of this brisket was the juiciness, and not just in the fatty cuts. In the order was an equal amount of lean and fatty brisket. For those lean brisket haters out there, this one can be a reminder of how good a slice can be when it isn’t as dry as the paper it’s served on. Greater skill is required to get the lean right, which is why it’s so special when it comes out like this.

Now it’s time to choose between five desserts, or just get them all. A dense pecan pie is made with Mrs. Butterworth’s (I incorrectly guessed it was sorghum syrup), and if that’s not rich enough, opt for the bread pudding made with croissants. Peach cobbler was a classic loaded with fresh peaches. I also loved the lemony buttermilk pie and the unsightly banana pudding, but the winner was the bread pudding topped with banana pudding – a different kind of a la mode.

Pondering whether my final bite should be pie, brisket, or that last onion ring it sank in that this was one of the best barbecue meals I’ve had in recent memory. Taking into account the comfortable setting, the care put into preparing the sides, desserts, and primarily the array of smoked meats, there isn’t much in Texas that can touch Killen’s Barbecue.