This barbecue joint does not exist. No, this is not the start of a philosophical argument over what is and isn’t real. What I mean to say is that I thought this category of barbecue joint–“the unknown”–was gone forever. The “unknown” is a place that I would characterize as a “hidden gem,” a restaurant that has yet to be “discovered” for its fantastic food. Snow’s was famously an “unknown” until Texas Monthly happened upon it in 2008, declaring its barbecue the best in the state. Since then, with the popularity of Yelp and social media and barbecue’s general rising star, word of good smoked meat travels fast, so I thought the “unknown” was a relic of the tradition’s past.

There are, of course, still places that are small and have little Internet presence, but they’re often just not that good. It is my mission to eat at every barbecue joint I can find, and to that end, I still visit ones I’ve never been to. Places like Kolacny Bar-B-Q, a small joint in Hallettsville that has been open for 26 years. I’m not sure when or where I heard about it, but when I was in search of mutton, that quest that took me through Hallettsville to try Novosad’s lamb ribs. While I was out that way, I referred to my trusty barbecue map (a.k.a., my to-do list) and saw a red dot labeled Kolacny’s. I filed away the address and planned a drive-by to confirm my assumption that it was no longer open. Instead, I found a fresh pink paint job at the corner of Russell and Main. The words “Saturday & Sunday” were painted between a dancing pig and a chicken. As I was out on a weekday, I made plans to come out as soon as I had a free weekend.

A few weeks later, I drove down from Dallas, arriving at Kolacny’s at 11:40, too late, it appeared, to get the whole menu. I ordered what I could get–pork steak, chicken, and sausage–and tucked into the plate. It was fantastic. This delighted me. It also perplexed me. And warranted an immediate call to my editor to relay the news that I had found an unknown. Why, I wondered to her, did it take so long to find this place? 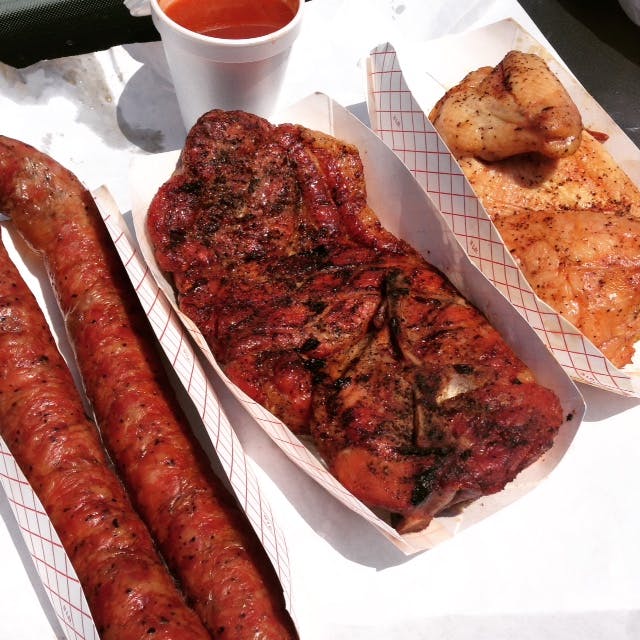 Kolacny’s has two five-star votes on a dummy Facebook page. Their Yelp profile is a shell. The only mention I could find online of any physical barbecue from Kolacny’s is on a Czech-centric blog which mentions their house-made sausage in passing. Twitter is silent on this gem in Hallettsville minus mentions made on my own feed during my two visits over the past month. Kolacny Bar-B-Q doesn’t exist online, and to most city-dwellers that is the equivalent of nonexistence.

Pitmaster Ervin Kolacny barbecues five meats–brisket, pork ribs, chicken, pork steak, and sausage–over oak coals. He and his wife, Carolyn, collect their own wood. “When it cools off we’ve got about eight trees that we need to cut,” Carolyn tells me. Ervin, who worked 45 years for the city, ran the place on the weekends before he retired (Carolyn is also retired), and as part of their post-career plans, they kept the business open. Carolyn takes the orders up front while Ervin tends the pits. The meats are all cooked over direct heat and get mopped along the way. Ervin cuts them to order in the back room where he keeps a sheet of orders from phone calls earlier in the day. 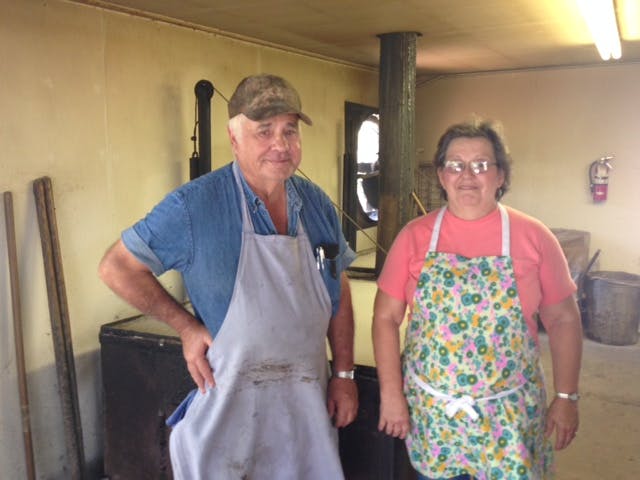 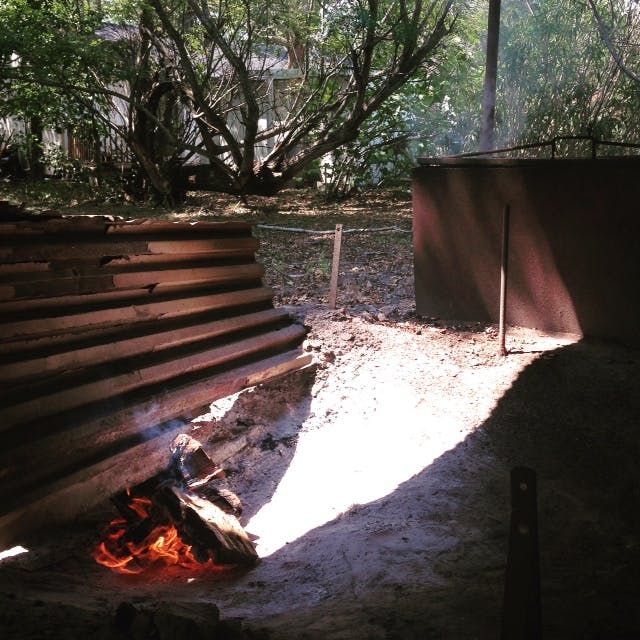 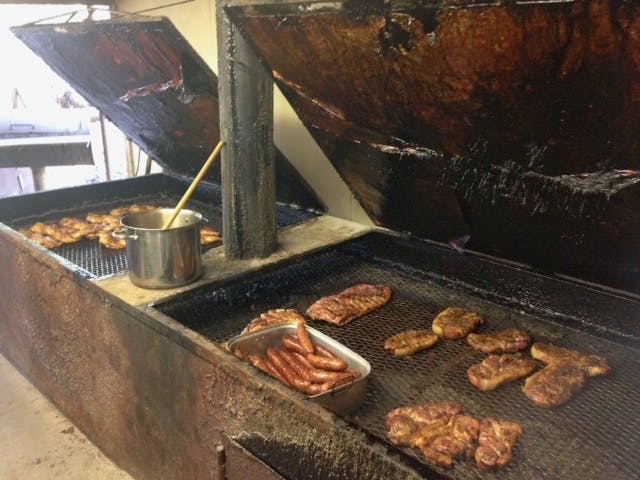 It was because of all those phone orders that when I arrived on my first visit only three options were available, even though I was there just a mere forty minutes after they opened. (Someone ordered three whole briskets for a party, so I could only stare at them in contempt as they stayed warm on the pit.) But as I said, what I had was top-notch.

The sausage was a standout–and for good reason. The Kolacnys’ pork sausage is a family recipe, a coarsely ground link with plenty of black pepper. It had good snap, was plenty juicy, and was cooked in a small smokehouse on site. The inch-thick pork steak was one of the best I’ve ever tried, with a charred flavor you can only get from fat dripping down into wood coals. The crisp and salty skin of a half chicken surrounded juicy meat, a difficult feat to achieve when using the direct-heat method. I picked up all of this food for just $14, making this one of the best barbecue deals in Texas. 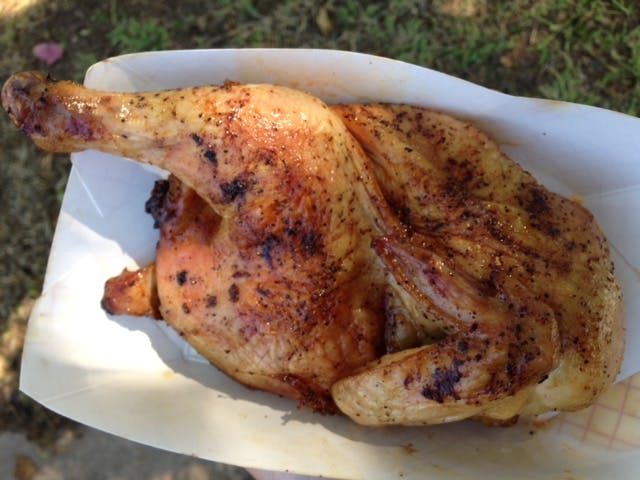 But even after such a great meal, I felt unfulfilled. As soon as I headed for home, I started planning another trip back so I could try the brisket and pork ribs. There was also a head-sausage on the menu I wanted, but Carolyn said it wouldn’t be available again until fall. I couldn’t wait that long; two weeks later I headed south again, nine-hour round trip be damned.

At 10:00 on a recent Sunday morning, I called in my order from the road to ensure I could get the entire menu, and despite what I thought was prudent forethought, Carolyn still had to check with Ervin to make sure she had enough brisket to serve me. I entered with great anticipation and watched locals–who had brought their own metal pots to be the vessel they used to take their barbecue order home–have their full pots weighed and priced. I peered back through the glass window to the cutting block where Ervin was making his way through the day’s orders. As Ervin sliced the brisket, I could immediately tell we wouldn’t be hitting 5 for 5 today. The knife struggled to get through the tough meat, a struggle my teeth would later mimic. In a word, it was tough, and I just can’t recommend it. However, the other cut I’d missed out on previously–the pork ribs–were juicy, smoky, and salty, an item that on its own was nearly worth the the return trip. 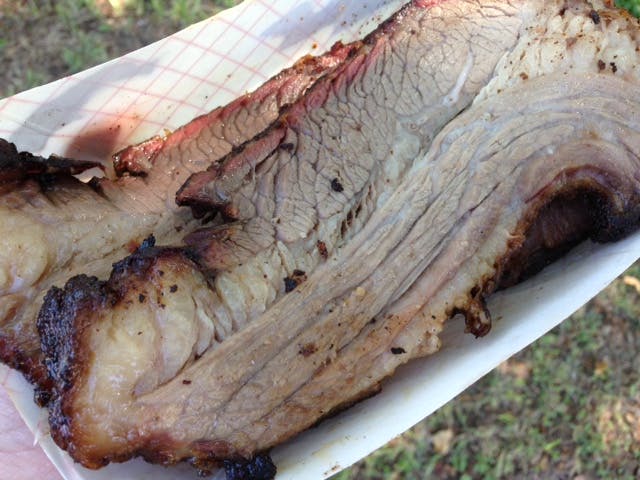 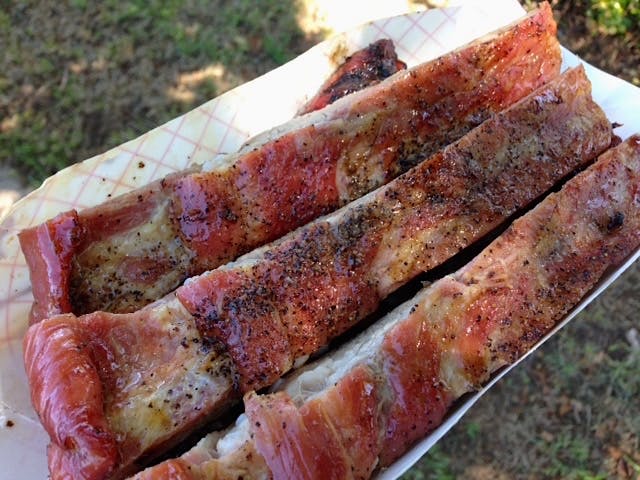 On that second visit, the sausage and pork steak held up to the expectations in my memory; the chicken exceeded them. Even with a disappointing brisket, 4 out of 5 ain’t bad, especially when all four are exemplary versions of direct-heat Texas barbecue. Taken alone, each is worth the trip to Hallettsville. 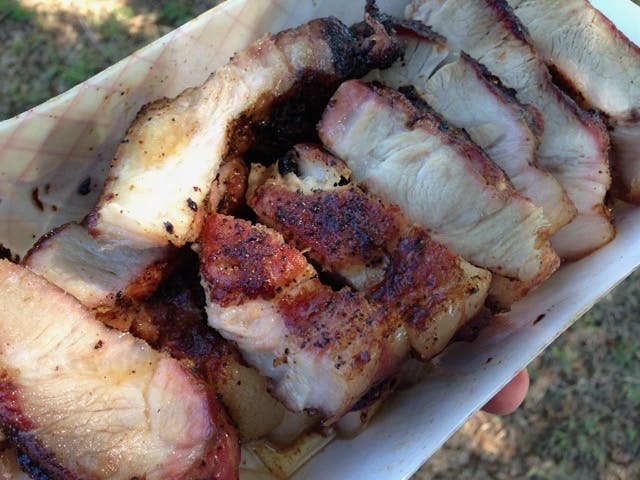 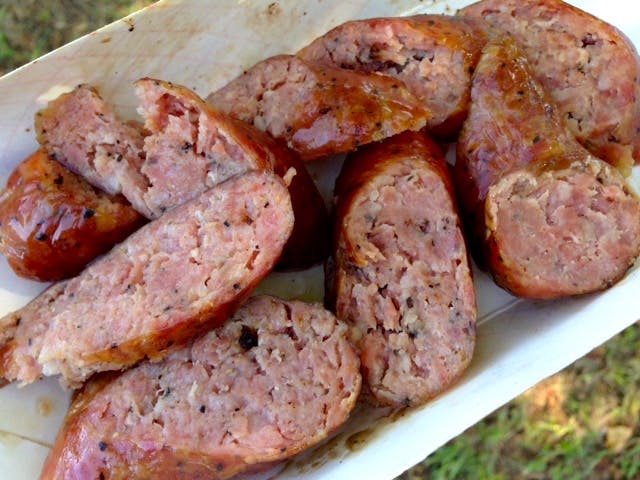 To this barbecue lover, it’s astounding that Kolacny’s has remained “undiscovered” for so long. A few situational factors could be the culprit–being located on the south side of Hallettsville, tucked off the state highway in a residential neighborhood of what is already a small town between Houston and San Antonio. That, plus it’s 17 miles below I-10, a distance that may as well be 1,000 miles when you’re talking about proximity to the interstate.

On the other hand, that a place like Kolacny Bar-B-Q can still exist in this hyper-connected world is a blessing. I finished my second meal and got behind the wheel with a renewed hopefulness that a detour along the next seldom-used FM road could really bear fruit. Because it exists, all those past and future miles feel more worth it.