When we eat smoked brisket in Texas, we can stop and thank the Jewish community. Or, at least that connection can be firmly made. As Daniel Vaughn, Texas Monthly’s barbecue editor, noted in a column on the history of smoked brisket, the first mention of the meat in Texas was in a 1910 newspaper ad for a Kosher grocery store in El Paso.

Smoked brisket’s long legacy in the state was celebrated at the Second Annual Kosher Texas BBQ Championship, held this past October in San Antonio. Hosted by Congregation Agudas Achim, 2,000 pounds of Kosher meat donated by H.E.B. were consumed within a few hours by more than 2,500 people.

Twenty teams competed for to win honors for best brisket, chicken, ribs, or beans in both a blind tasting and a ‘People’s Choice’ competition. It was as if the Bible was written with a barbecue challenge in mind, inspiring team names like Burnt Offerings, Golden Calf Grillers, and Bris-kit, a reference to the Jewish male circumcision ceremony. (This humor extended to the event’s official tagline: “no pork butts about it,” a reference to the strict Kosher rules that barred pork and dairy from the competition.) 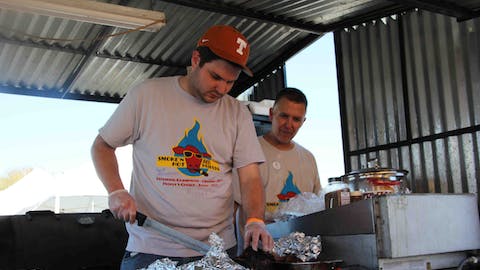 Teams were required by the rules to follow the standards of Kashrut, the laws of Kosher. It’s a long process that began Friday, when contestants dipped utensils in boiling hot water and cleaned grills with a blow torch to ensure all the cooking utensils had been properly “kashered,” or cleaned in such a way that they’re deemed kosher. A rabbi stood by and supervised the preparations, per tradition. And on Friday night, as is the Jewish custom, all work ceased in accordance with Shabbat, the Jewish day of rest. On Saturday night, as the sun set and teams could begin work again, the pitmasters, their families, and members of Congregation Agudas Achim gathered in the synagogue’s parking lot, where the event was taking place, to sing Havdalah, the closing prayers of the Sabbath, before they started in on the meat.

They smoked the briskets all through the cold night, which gave to a warm, sunny fall day. Hungry attendees began streaming in at noon, lining up at various tents to get a taste. A surprise visit by Kinky Friedman, a two-time gubernatorial candidate and former Texas Monthly columnist, momentarily stole attention away from the meat. Talking with his trademark cigar hanging from the side of his mouth, he lamented the omission of pork. “This kosher cook-off is featuring, I guess, ribs, but not pork ribs, which are the best, so I’m interested in seeing how this holds up,” he said. But, he admitted, “the brisket should be good.”

And it was. I’m no barbecue expert, but armed with a few tips from Vaughn, I did my best to be discerning. And, not to brag, but my personal pick for ‘Best Brisket’ lined up with the People’s Choice Award winner, Beldon’s Hot Tar Pit. My father, Felix Frydberg, a more experienced judge of barbecue, remarked after his first bite of the winning meat, “This tastes like Rosh Hashana brisket, I like all of the schmutz”—the onions and other flavorings coating the brisket – a preparation of the meat similar to what’s served at a Sabbath meal versus what you might find at traditionally Texas barbecue joint. The chicken that won the People’s prize was neither Jewish or Texan, and featured pineapple. Know your crowd, I guess.

The big question is, how different does Kosher ‘cue taste than “treyf,” the Yiddish term for non-Kosher items? As someone who has only ever eaten kosher, I’ll admit I can’t attest personally to what that might be, but more worldly barbecue connoisseurs I spoke to at the event all confirmed no difference in taste between the two. Unless, of course, you improperly season Kosher meat. According to Randy Pulman, the man behind the event and Agudas Achim president, “Kosher food is salty by process. The butchers use salt, a saline solution to draw the blood out of the animal after the slaughter so the product is already pretty salty. That means if you have a soy-based marinade, throw it out the window; you don’t use that. If you have salt in your rub or your marinade, you cut it back by ninety percent.” 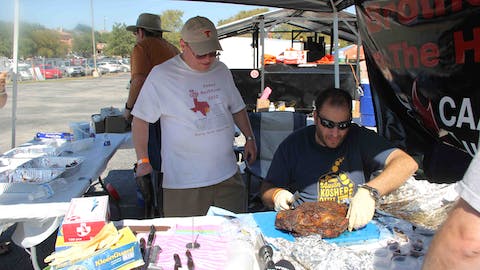 Pulman got his start in barbecue competitions at the San Antonio Rodeo Barbecue Cook-off with members of his law firm several years ago. When looking for a fundraiser for the synagogue, the idea came about to create a Kosher version of the event. This year’s Texas Kosher BBQ Championship is set to have raised well over $100,000, and five percent will be donated to the San Antonio Food Bank.

Though Kosher chili cook-offs exist around the state, Pulman is now working to initiate a Kosher barbecue circuit. Which would be nice for us Kosher-eating Jews in Texas who want some good barbecue. Tamar Solomon, a UT freshman who observes the laws of Kosher, said it’s not easy being around so much barbecue and never being able to taste it. “It’s like you can see it, but you can’t touch it. And it smells amazing,” she said. “It’s hard.” But she and her family had a chance to experience the delicacy that is Kosher barbecue. When her parents came to Austin from New York to visit her, they skipped UT Parents’ Weekend, drove down to San Antonio, and gorged on the offerings at the competition. When asked what they thought about it, they just said, the meat was divine.