On two previous trips to Lockhart, Kreuz was solid, but it has never been otherworldly. I assumed this trip would be no different, but it turned out to be one of my best barbecue experiences. I’ve eaten mounds of barbecue in my time, but this day was different. Two companions and I had eaten at nine joints one Saturday. We had started early, so by four-thirty that afternoon, we were back in our hotel room in Lockhart discussing the following day’s line-up of Smitty’s and Black’s. One friend lamented that he wouldn’t be able to try Kreuz, and it hit me that I’d never done ten barbecue joints in one day: Kreuz would make it an even ten. As we walked through the front doors, I couldn’t imagine that another bite of meat would taste good, but that seductive smell began to change my mind as I gazed into the firelight of the smokers. 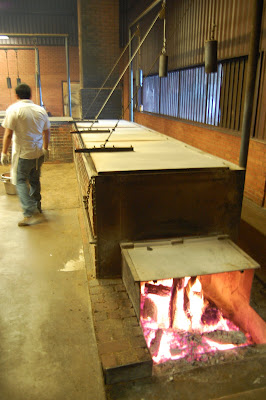 I bellied up to the counter to order. Just like Smitty’s down the street, this joint offers both fatty brisket and shoulder clod, which they refer to as “lean beef.” Both were included in my pile o’ protein along with a spare rib and a pork chop. 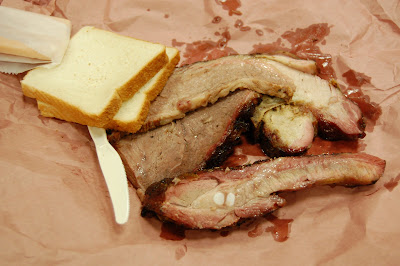 We then commenced gorging with grease running down to our elbows. The lean brisket was phenomenal. It was moist, perfectly tender with a deep smokiness and robust flavor from the salty rub. The fatty brisket didn’t fare as well. The flavor was fine, but it was simply too fatty for me to order it again. Spare ribs were a bit tough, but the deep smoke line and salt and pepper rub melded together to create some fine-tasting pork. The pork chop was the biggest surprise. This lean meat can sometimes get dried out, but this slice was perfectly moist, tender, and smoky. The salty rub was evident in nearly every delicious bite, and I picked the bone clean.

As I was leaving, I noticed that most of the customers had been taken care of, and Roy Perez, the semi-famous pit boss, was sharpening his knives. I walked over to ask for a picture, and he gladly obliged. 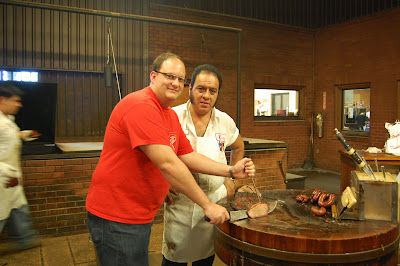 I was surprised when he handed me his newly sharpened knife to try some carving on my own. It was the perfect ending to a great eating experience and a groundbreaking day.