Two years ago, I took a road trip with two friends and stopped at ten joints in a single day. Our final stop was Kreuz, and it did not disappoint. I was hoping to strike gold on this trip where Kreuz was again the tenth stop on a epic day of barbecue’ing. Roy Perez is the pitmaster here, and he was tending a tasty pit on this day. 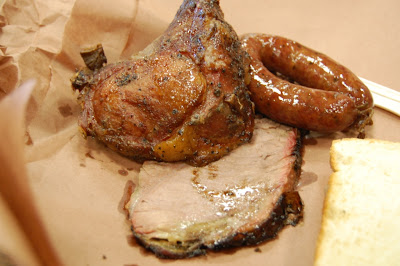 We opted for a link, an end cut pork chop, and a thick slice of clod. The all-beef link was juicy and robust. It had a great snap and plenty of spice. I prefer a link with a little pork in it, but this was a great example of the all-beef variety. The clod was rich and smoky. The perfectly tender meat was surrounded by a thick black crust and a great smokering just beneath it. It very well may be the best slice of clod I’ve ever eaten. The thick pork chop wasn’t far down the ladder. Intensely flavorful and supple meat was enveloped by a thin line of perfectly rendered fat that gushed with salty flavor. I don’t think there could have been a better ending to such a long day of eating, and I sat amazed as we finished every speck of meat despite our very full stomachs. It was a real testament to the quality of the meat, and to Roy’s skill as the quintessential pitmaster.