It’s hard to replicate a legend, but that’s what Keith Schmidt is tasked with at the new Kreuz Market in Bryan. Keith bought the business from his father Rick in 2011, and he’s shepherding it through their first true expansion since the business first opened in 1900. The Schmidt family has been instrumental in other versions of their business like Hill Country Barbecue Market in New York and Washington, Lockhart Smokehouse in Dallas, and more recently Schmidt Family Barbecue in Bee Cave, but this is the first time the name “Kreuz Market” has been placed on a building outside Lockhart.

I was there in January to document the ceremonial lighting of the pit in Bryan which was done with coals trucked over from the pits in Lockhart. Saying that tradition is important to the Schmidts is an understatement, but with expansion comes a few compromises. The city of Bryan wasn’t keen on open fires at the end of brick pits like they have in Lockhart, so the pit room is filled with two Bewley smokers and one from Klose in Houston. These are offset smokers of the same type used at Schmidt Family Barbecue. That was a change they expected, but another took them by surprise.

The motto of Kreuz has always been “No Sauce, No Forks.” The Lockhart original doesn’t even have barbecue sauce on the premises, and patrons eat the smoked meat with their hands. When this tradition was spotlighted in the Bryan paper, the commenters were not pleased. One logged in as bcresident wrote “I am not a cave man and don’t eat with a knife so forks would be nice and Sauce is a must.” Pitmaster Marco Oglesby told me a few stories about unhappy customers including a man who returned to the register from the dining room, threw his tray of chicken down, and demanded his money back. Eating without a fork was a step too far for some.

Just two months in, a new sauce recipe was announced and a pail of plastic forks was placed alongside the spoons and knives (if you remember the same fight at Lockhart Smokehouse in Dallas, it was really just history repeating itself). The Lockhart original would keep the century-old traditions, but Keith Schmidt had a new business to run in a new town, and he gave the people what they wanted.

What was lost in all the kerfuffle was how good the barbecue is. They don’t have those roaring fire pits or Roy Perez at the helm, but they did find themselves a seasoned pitmaster. Marco Oglesby was the cook for some time at Opie’s in Spicewood before the Schmidts took him on at Schmidt Family Barbecue. When the new Bryan restaurant opened he made another move, and Lee Jasper joined him in the pit duties. The recipes are all the same, but the newer smokers give the barbecue an identity that’s unique from Lockhart.

Briskets at the original Kreuz are smoked with very high heat and finish cooking in just four or five hours. In Bryan they get a longer low and slow treatment. This provides more smoke, and a more consistently juicy brisket. On two visits the brisket was great. Both fatty and lean cuts were moist, peppery, and smoky. The signature beef clod was just as good an option, but with a beefier flavor. The only item that I think may have suffered from not having the high heat was the Kreuz sausage. Maybe the dryness of the link and tough casing can be blamed on my stop being in mid-afternoon, but there’s something about seeing the hot grease still bubbling inside the casing like you find at the Lockhart location. 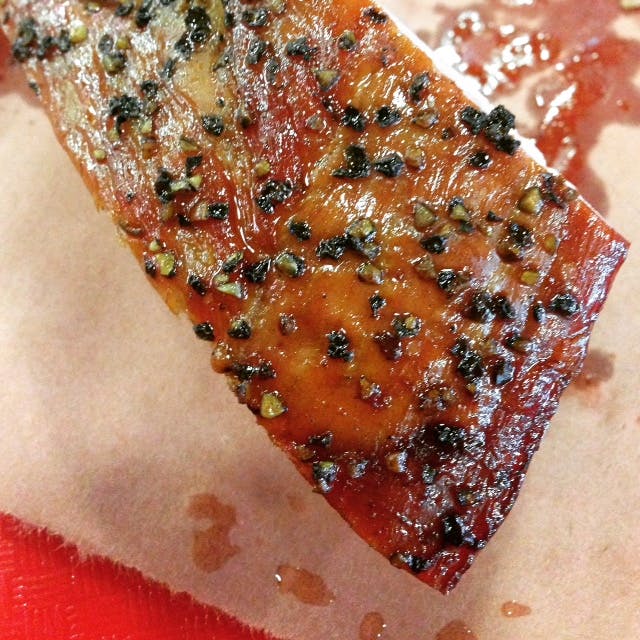 The pork chops are one of my favorites at Kreuz in Lockhart, and they do them well here in Bryan. They’re juicy with a bold smokiness and plenty of seasoning. The big chunks of black pepper on the pork ribs stand out like cloves studded onto a Christmas ham, but the flavor of the pork is still prominent. I liked that you needed to wrestle a bit with these behemoth spare ribs (nearly as big as the beef ribs) to get them off the bone, but the bones came away clean. The same can’t be said for the beef rib. It was the one dud from two visits – oversmoked and undercooked. 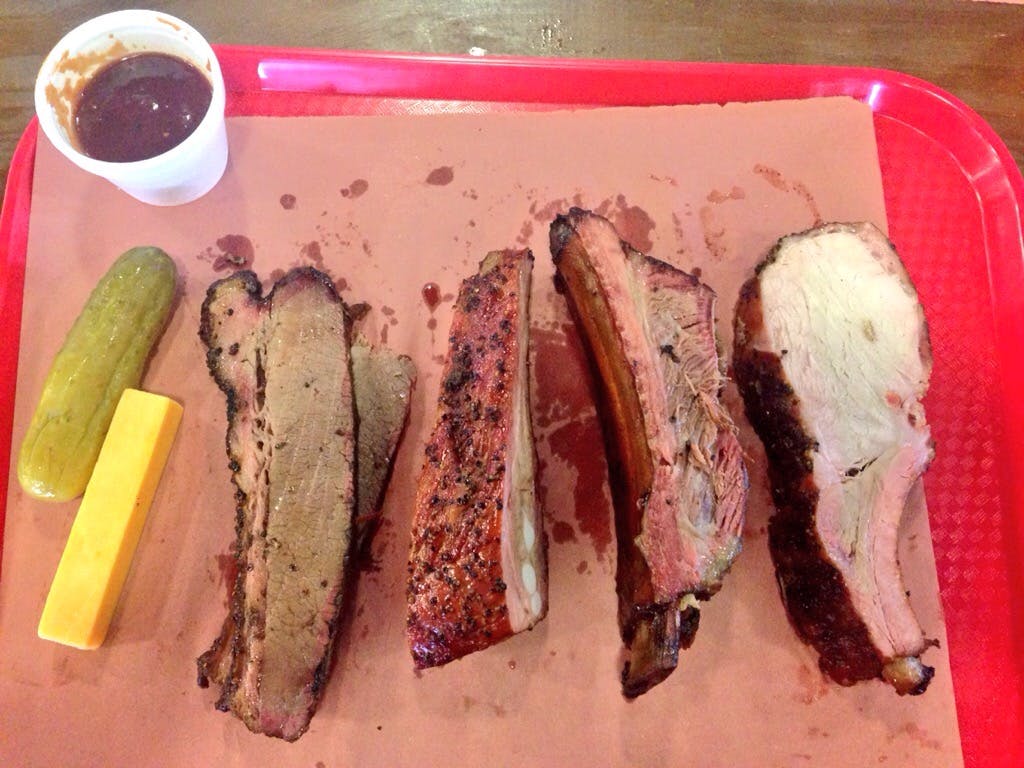 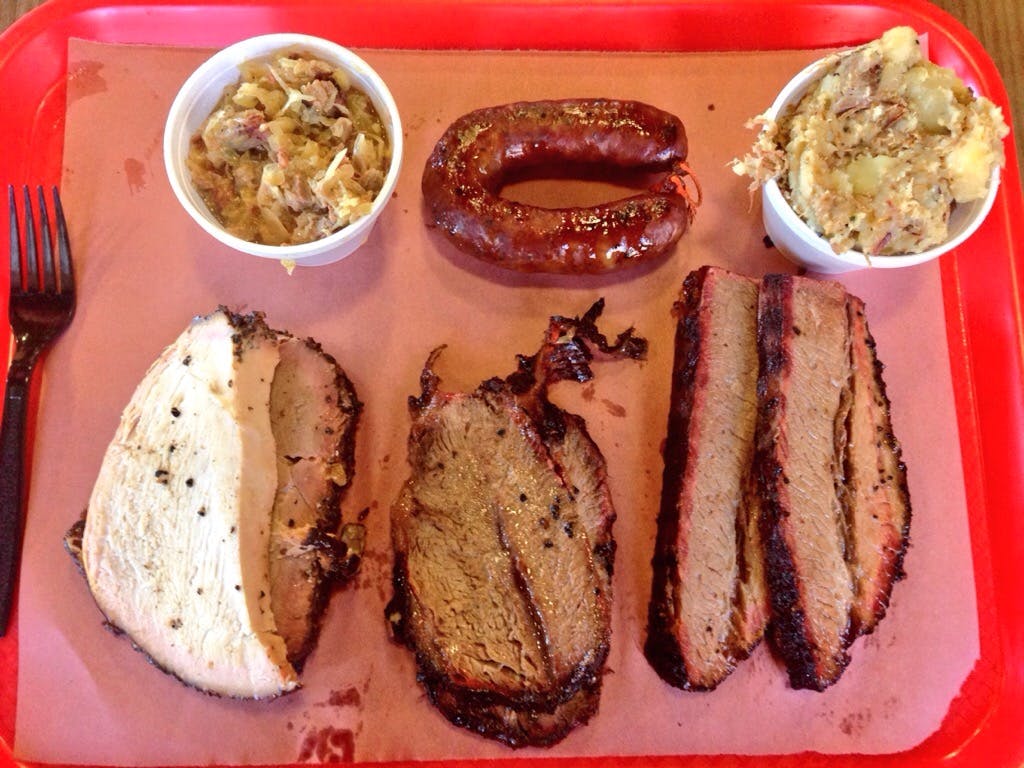 Smoked turkey was an odd round shape with 2/3 white meat and 1/3 dark. Visually it reminded me of my elementary school cafeteria, but the meat was juicy and tender. If you want poultry, I’d head straight for the half chicken. Oglesby told me that it has been the surprisingly good seller, just below the brisket and sausage. It’s a juicy bird with a crispy skin. Even the white meat had me coming back for more, and it’s honestly easier to eat without a fork. 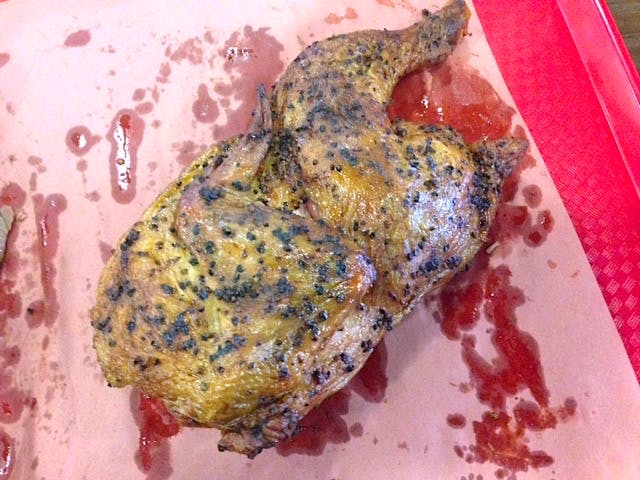 Sides beyond pickles and cheese aren’t what I’m after when I come to Kreuz, but I did sample some of their unique German-influenced sides. The sauerkraut was amped up with a generous amount of smoked meat, as was the the German potato salad. You won’t find sides like this at most barbecue joints, but I’d just as soon stick to the cheese and pickles.

Keith Schmidt should be commended for taking on the challenge of a new Kreuz Market. It would have been easier to open a new Schmidt Family Barbecue and save the comparisons to the sacred cow in Lockhart. The new location is never going to be the same as the original (even if the building in Lockhart is just sixteen years old), but the Kreuz Market in Bryan is putting out barbecue worth traveling for.