I walked through the front door, or at least I thought it was the front door. I was part way through it, when I turned around to walk back into the parking lot to make sure. It was definitely the front of the building, and this was the only door, but it led directly into the kitchen. To my left a woman was packing orders into to-go bags. On my right the fryer, a rigged hotel pan on a gas burner, was at full bore. A man with a knife stood behind a stainless steel table with a cutting board waiting to take my order. I asked for the three meat plate and a chopped beef sandwich. He took a few pans out of the warming cabinet and quickly went to work slicing.

Erik Mrok emerged from his office to collect my money, which was only $15.50 total. Mrok explained that a rail line that came through a few years ago required that he demolish the long-standing dining room. That’s where the main entrance used to be, but now they have no choice but to welcome you into the kitchen. It’s all that is left.

The only real option is takeout, so I headed outside to eat on the trunk. I started with a sandwich of brisket chopped fine and mixed with the homemade barbecue sauce. The sauce is a mix of ketchup, mustard, Worcestershire, spices and thickened with flour. It’s a unique sauce that works well with the smoky meat. 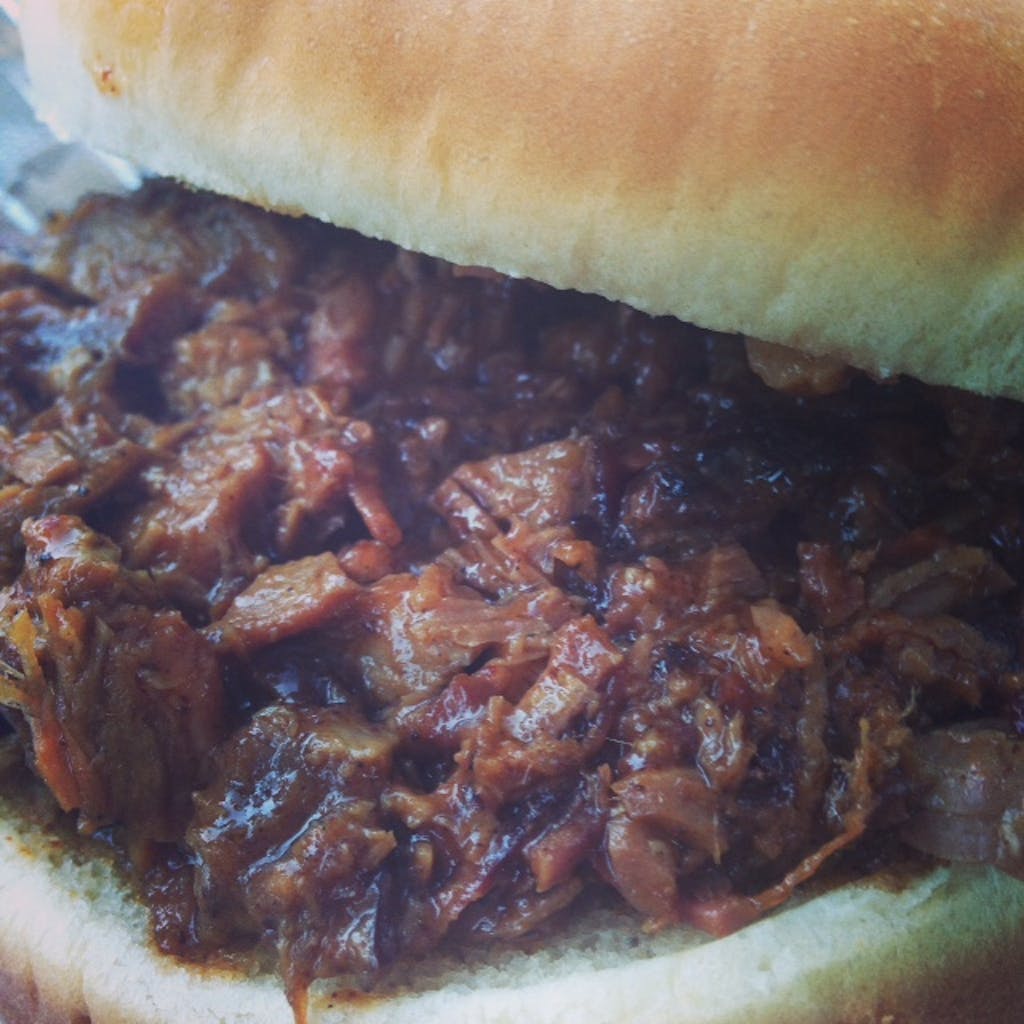 The sliced brisket wasn’t bad either, as long as it came from the fatty end. Slices from the flat were dry slabs of not so flavorful meat, while the point meat was moist with well rendered fat. The edges of each slice were lined with crispy fat, probably from sitting too long in the warming pan, but the result was still a good one. The smokiness was adequate, if not strong. Either way, it made for a good slice of brisket.

Like the rest of the smoked meats, the briskets emerged from an Oyler rotisserie smoker. The legend goes that when original owner Leonard McNeill ran the place he developed a rotisserie smoker from a Rainbo bread baking oven. Whether or not he developed these independently, or along with Herbert Oyler in Mesquite is not known, but it’s only appropriate that Lenox uses a rotisserie to smoke the meat.

A side of potato salad was nothing beyond food service grade. The okra on the other hand was fantastic. It probably started as frozen pellets, but that hot fryer gave it a shattering crispiness that made these pods addictive. 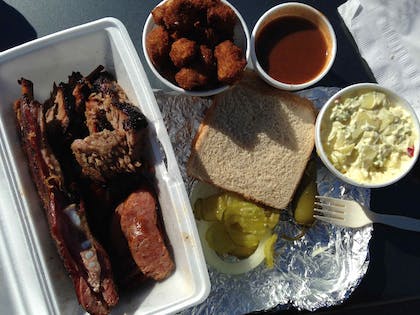 The sausage was once made in house, but now they serve a decent commercial variety from Yoakum, Texas. Big pork spare ribs were thin and a bit dry. The seasoning was primarily salt, and there was a bit of smoke. They were good, but I preferred the brisket.

Lenox Bar-B-Q has been around since 1946. In those sixty-eight years they’ve seen plenty of hurdles but stayed strong. Even without a dining room, it’s still worth a visit.