Traveling down I-45 into Galveston, the road quickly turns from interstate into Broadway. Just a few blocks after is a small wood sided building that could be mistaken for a house if not for the sign out front that claims not only Texas’s finest BBQ, but “World’s Finest BBQ”. I was about to find out.

Side dishes do not usually get a high billing on the pages if this site, but something about Leon’s “stepped up” rice that I still think about since my visit. The combination of tender rice, stewed celery, onions and a few other veggies along with a nice spicy kick made for one memorable dish. 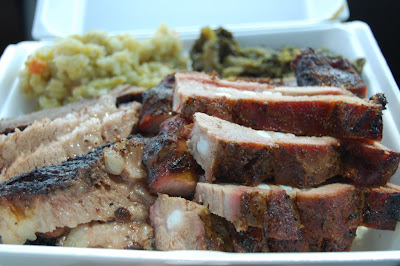 I placed a to-go order for ribs, brisket, greens and the aforementioned rice. The greens were on the bitter end and had zing, but paled in comparison to the rice. The meat wasn’t bad either. Ribs were firm and meaty with great flavor from a black pepper rub, and a great level of smoke. The meat could have been more moist, but I finished them off even though I knew I had plenty of ‘cue in my near future. Brisket lacked a smokering, but had a dense black crust. Despite the smokering, the moist and tender slices had plenty of smoke. There was plenty of well rendered fat in each slice, and plenty of flavor. This was some fine ‘cue. Leon, if you’re out there, and willing to share that stepped up rice recipe, let me know.