At 10:00am, the sun seemed nearly at full strength in the desert. One man had unfolded a chair and sat next to the door waiting for it to open. By the time it did, a line stretched at least forty deep, and the parking lot was so full that some cars sat idling in the aisles. It was 11:00am at Little Miss BBQ in Phoenix, Arizona, and this crowd was here for a taste of Texas. 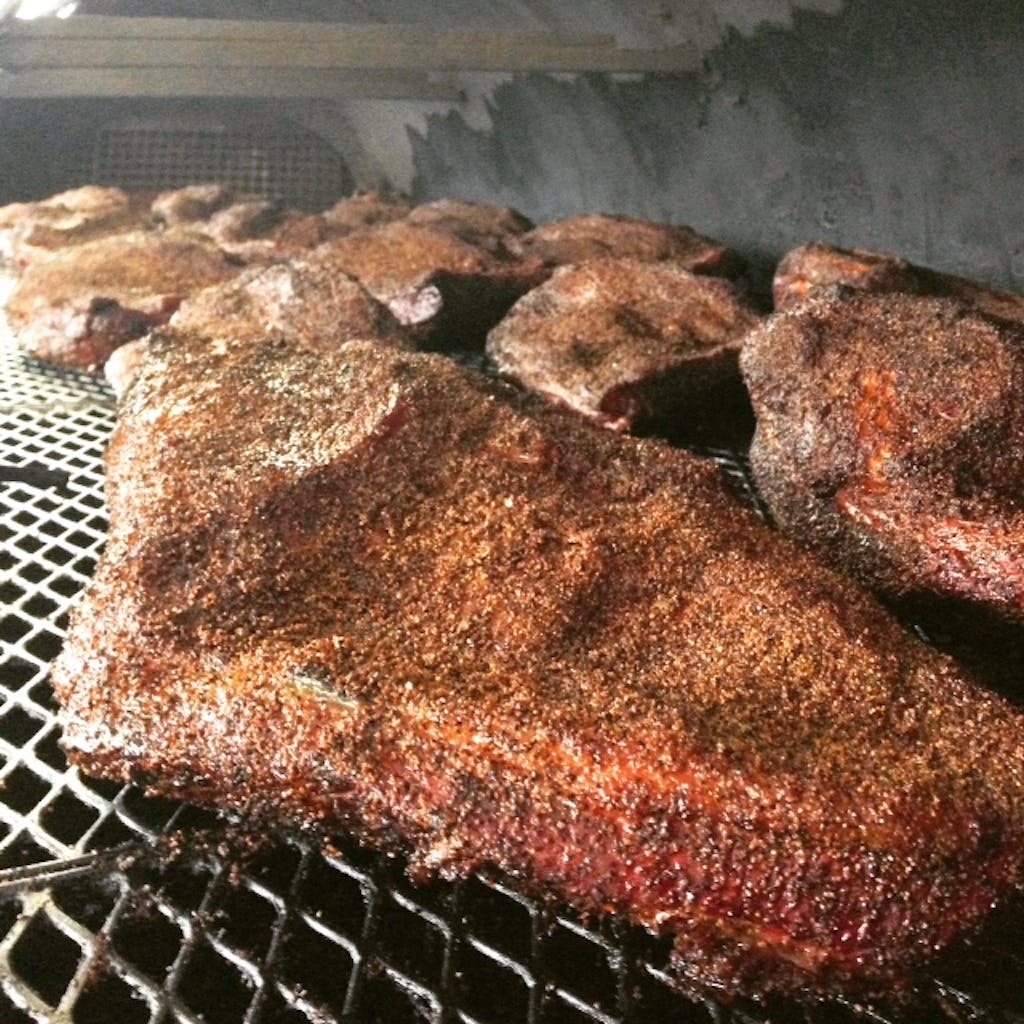 It was a few years ago that Scott Holmes and his wife Bekke decided to scrap any other restaurant dream for a singular focus on smoked meat. Unlike most pitmasters, Scott had a culinary school degree, but a trip to Austin had changed him forever. It was an epiphany at Franklin Barbecue that set this train in motion. A stint on the competition circuit served as practice before they took the leap, but city officials did their best to derail things before they even got started.

With limited funds, the couple found a small place in a semi-industrial district. The old taco shop didn’t have much kitchen space, but that didn’t matter when most of the cooking would be done in an exterior smoker. That idea wasn’t easily accepted. Phoenix isn’t exactly a hub of barbecue activity, so wood-fired pits are something of an outlier when it comes to kitchen equipment. When the reviewers demanded more walk-in space, Scott said he didn’t need it. They asked “What will you do with your leftovers overnight?” He told them “I won’t have any. I’m going to sell out of food every day.” It took some convincing, but they were finally able to open in February of last year with a giant offset steel smoker in the back. They’ve since added a second.

The set up will be familiar to anyone who has eaten barbecue in Central Texas. Scott mans the cutting block and passes out meat morsels to diners as he prepares their order. Meat is weighed out and placed on butcher paper lined trays. Sides aren’t fancy, and desserts are limited. For all intents and purposes, it’s a Texas style barbecue joint, just a couple states too far west. 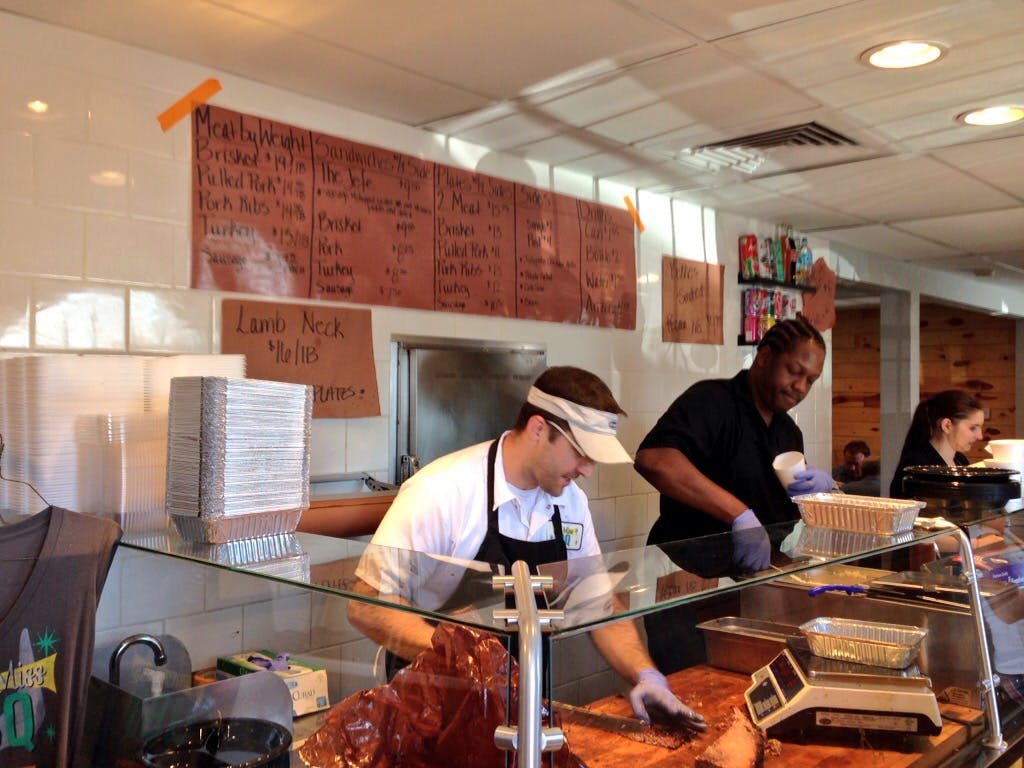 As the brisket was unwrapped from its grease-soaked pink butcher paper, the smell of black pepper and oak smoked beef filled the air. It looked and smelled like a Franklin Barbecue brisket, and the homages didn’t stop there. Spare rib racks are wrapped in foil to finish cooking as is the pulled pork which comes out incredibly tender with a color close to dried tobacco. It’s not jet black, and it’s not incredibly smoky. That’s not a bad thing, but it did need a boost of flavor. The mustard sauce (one of three sauces available) did just the trick.

Those ribs had all the flavor they needed, but required quite a tug to get them off the bone. Sliced turkey was juicy and peppery, and elevated itself above just a poultry lover’s default order. It was a promising start, but we all know which cut they’d really be judged on. 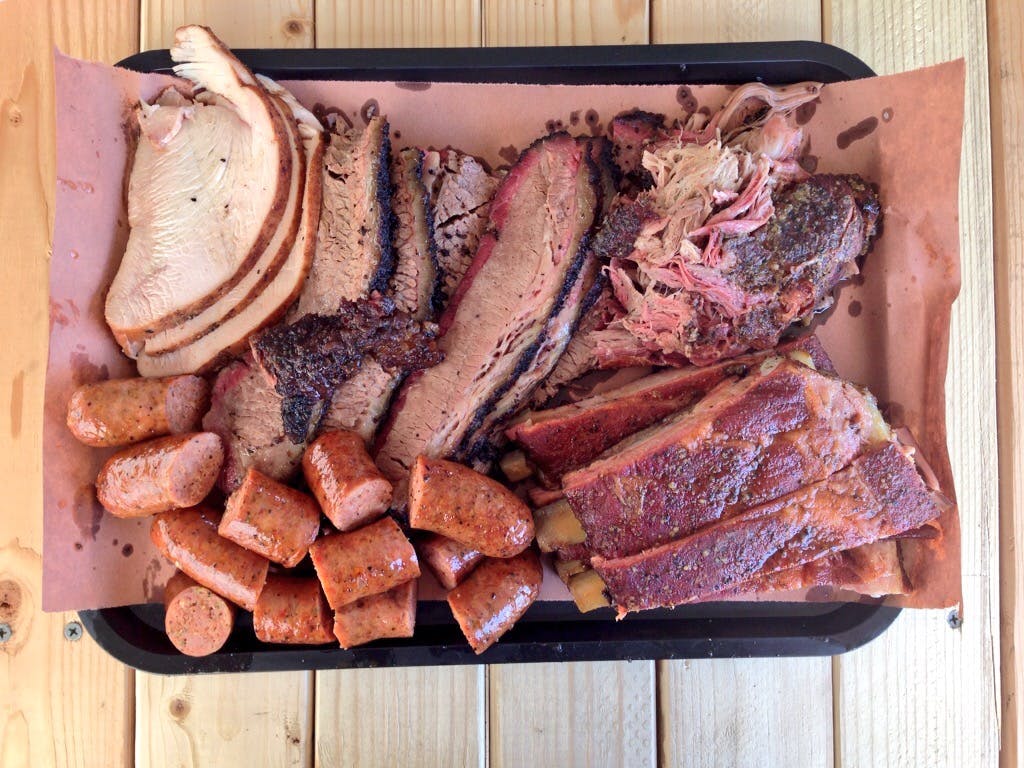 Even as it was just being sliced, I knew the brisket was going to be good. A generous fat cap still covered the lean side, and the fatty slices tumbled like ribbons onto the block as the knife eased through the beef. The lean side was immensely juicy, but the fatty side was downright decadent. They use prime grade briskets here, which helps keep things moist. Scott told me he was buying choice grade until he found out that his meat supplier had been grinding all the prime briskets for burger meat. Now they don’t make it to the grinder. Bites with too much bark were overwhelmed a bit with salt, but otherwise this was some well balanced brisket. A few slices in, and even the most homesick Texpat would find some relief in this smoked beef. 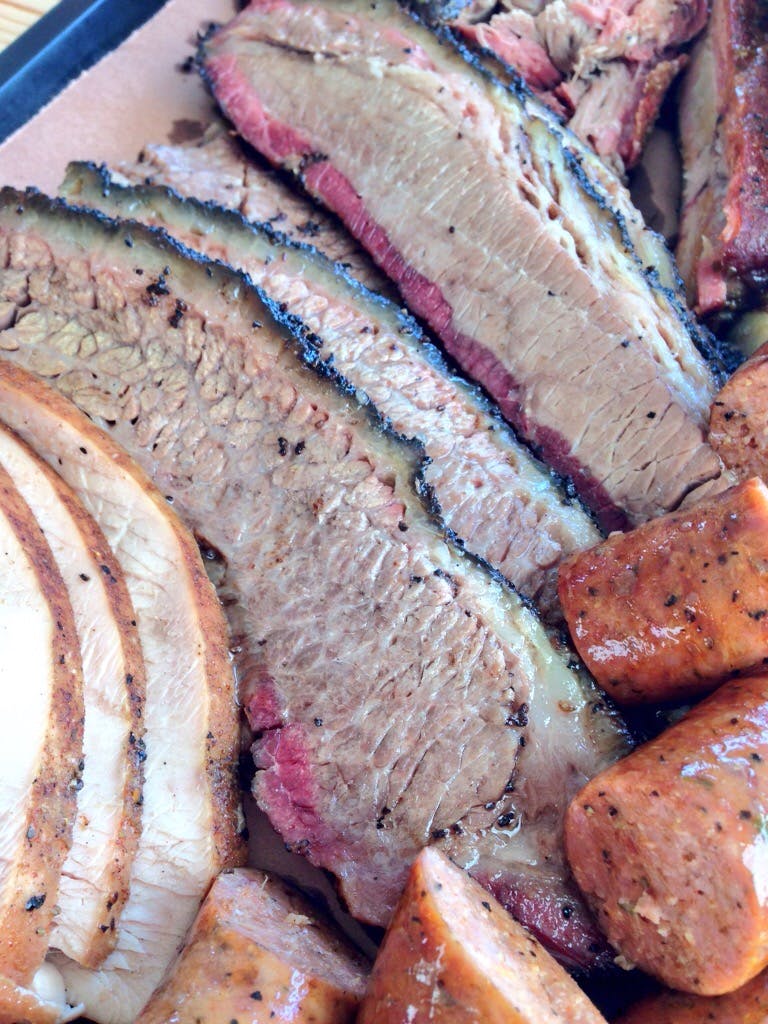 One distinct variation from Franklin is that they make their own sausage at Little Miss BBQ. It’s a beef and pork mix with a variety of spices that were tough to pin down. When I mentioned to Scott that the casings could have used more time in the smoker, he laughed. What is a restaurateur to do when his lone restaurant grade grinder goes kaput? He just grabbed the old grinder that they used back when the place had a fraction of its current volume. At the current demand, the grinding took forever, so when it was finally through there wasn’t quite enough time to stuff and smoke them to perfection. If they were this good on a bad day, I can’t wait to try them on a good one.

On any given day you might find a special of pastrami or beef ribs, but I think I got lucky to be there on lamb neck day. They found a deal on this cut and decided to throw them on the smoker, and they sell them whole. They weigh in at around two pounds, so it’s not going to be cheap at $16 per pound, but I promise it’s worth it. Strands of the fatty meat pull away from the bones easily. The lamb flavor is undeniable, but not overpowering. The texture is like that of pulled pork, but with a heartier flavor. It’s was one of those experiences that made me wonder why I hadn’t thought of cooking lamb necks in my own smoker. 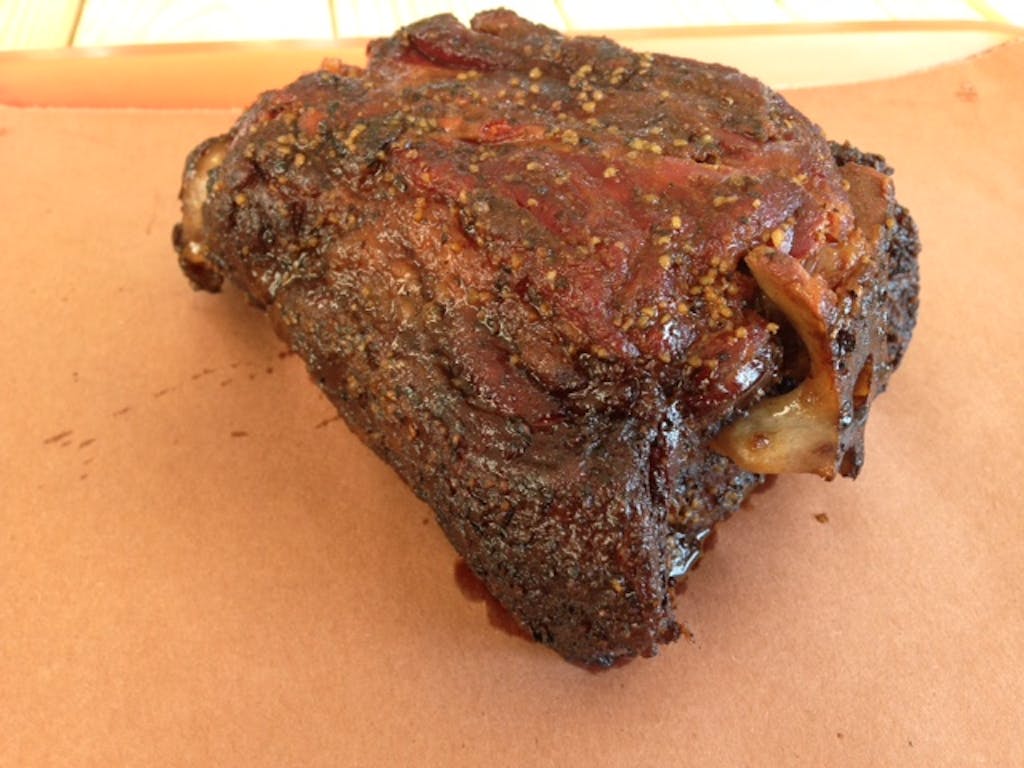 There are four sides on the menu, the cold ones – slaw and potato salad – are forgettable, but the meat-studded pinto beans and the jalapeño cheese grits were both fantastic. A special recipe pecan pie was the only dessert during the visit. It’s Bekke’s secret family recipe and they say it’s smoked. I didn’t even catch of whiff of smoke on it – one explanation might be that I had just inhaled six different smoky meats immediately beforehand – but it was a great way to end the meal. 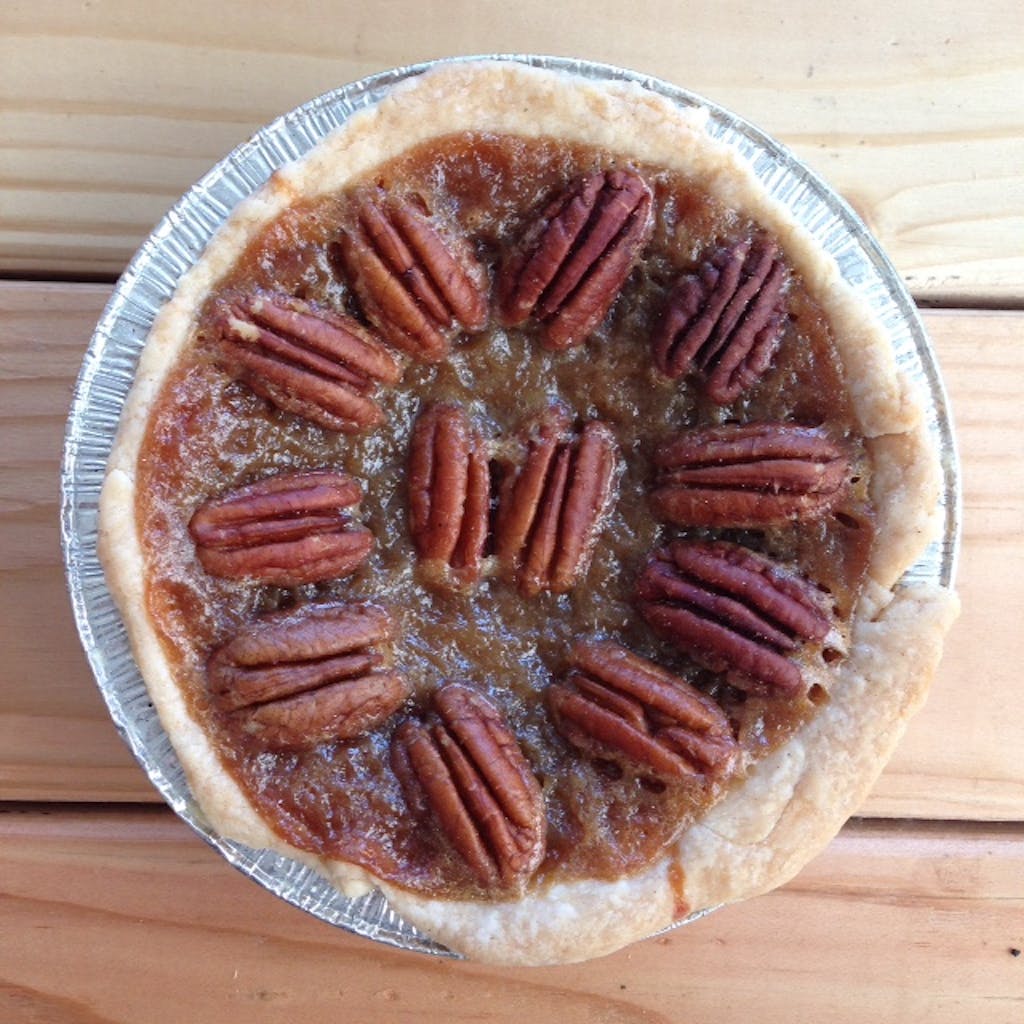 Like all great barbecue, this stuff is worth standing in line for. You better get there quick before the weather really heats up, because it’s worth the trip. I’m not sure if this is the best Texas style barbecue outside of Texas, but it’s certainly in the conversation.