After sampling some Longoria’s chopped beef and delectable brisket sausage at the Rahr Brewery tour, I knew I needed to get back soon. Besides, I was already out of the beef jerky that I picked up at the tour which is the best I’ve ever tasted (in addition to being a BBQ connoisseur, I’m also a jerky fanatic . . . bacon freak too). After a quick stop at Hickory Stick down the street, my sister and I headed over to Longoria’s.

Feeling our oats, we opted for a three meat plate of sliced brisket, St. Louis-style ribs, and their famous brisket sausage. Also on the plate were unremarkable green beans and over-sweet potato salad. This being our fourth stop of the day, the sides were just unnecessary distractions anyway. Besides, with meat of this quality staring you in the face, we were firmly focused on the protein. 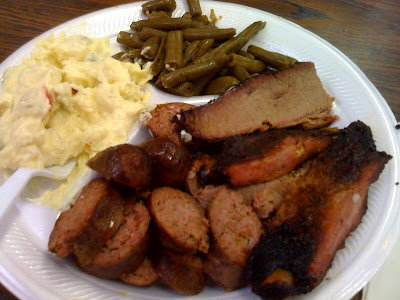 Tales of the all brisket sausage are told far and wide across the Metroplex, and it did not disappoint on this date. The coarse grind of the brisket held little filler and copious amounts of smoke. The lean sausage was bursting with beefy flavor surrounded by a casing with average snap. It was hard to stop popping those slices, but the other meats were getting jealous. A generous salty rub on the ribs still allowed a deep black crust to form. The tender meat beneath mixed with the well-rendered fat to create a deeply smoky rib. The brisket slices were a bit more dry with less smoke, but these lean slices had a good crust and smoke line with a line of nicely rendered fat at the base of each slice. The only thing this meal was missing was a jerky chaser, which we managed to down on the way back home despite our distended midsections. It may be a haul from Dallas, and even downtown Ft. Worth, but Longoria’s is definitely worth the trip.