In the words of owner Wayne Mueller, black pepper is a food group at Louie Mueller Barbecue, in Taylor. There isn’t a whole lot that it doesn’t go into, and its pervasiveness around the restaurant means it will find its way into unexpected places like your cup of lemonade, and most certainly between your teeth. When in Rome, drink it in.

Three of us hit Louie Mueller early on a Friday morning. There was some confusion on my end about the opening time on a Friday, so we were seated at the steps in front of the entry doors waiting for them to be unlocked. Being the only folks on the sidewalk, it was pretty obvious what the issue was so Tony White, who helps run the pits, came out to let us in the back for a pre-lunch tour. Wayne Mueller was back there stuffing beef sausages. He chuckled a bit looking up from his work table to see me standing there. We know each other after many conversations about smoked meat and the barbecue business in general. We chatted until about five minutes before opening time when we took a spot at the front of the line. 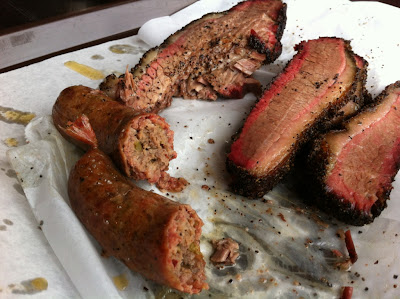 This was our first stop of the day, so we were hungry and I let it get the best of me when ordering. One tray was covered in sliced brisket and jalapeño sausage. The sausage is one of my favorites, and this link was perfectly spiced. The casing had a great snap and bright green bits of jalapeño could be seen throughout. As great as it was, I passed off the sausage link to Nick and dug into the brisket. In the eyes of most barbecue connoisseurs, fatty brisket has no equal. While I love a good juicy slice of brisket from the point, there’snothing much better than a perfectly smoked slice of lean brisket with a generous cloak of translucent fat clinging to its length. We all smacked our lips and grunted in carnivorous approval while downing the fatty brisket that was on the tray, but the lean brisket was worth pondering. I broke off each bite and looked it over closely before placing it in my mouth. The meat was pleasantly taut but broke apart with little effort. The natural dryness of the beef was given a sumptuous counterpoint of the silky fat cap that was just a sponge for smoke and seasoning. The thick layer of cracked pepper and the thicker smokering were all working together to create textural combinations not found in mortal brisket. This was probably the smokiest version of brisket I’ve had at Louie Mueller, and I can remember the flavor vividly as I write. Three of us sat there after many days on the road eating the best barbecue that Central Texas had to offer, and one simple word was repeated by all: perfect. That was just the first platter. 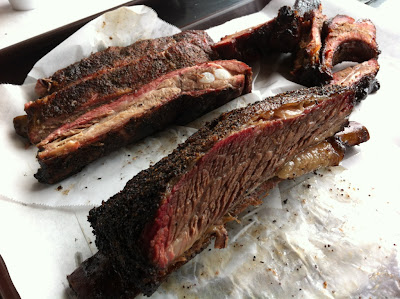 The second tray was covered in ribs. A beef short rib had about three inches of smoky beef laced with well-rendered collagen and fat, creating a silky texture not found in any other cut of beef. When a piece of meat is described as being “like butter,” these beef ribs are the definition. What Wayne does with a simple beef rib is magnificent, and if other pitmasters would open their eyes to this potential, then we’d see more of them around the state.We received an end cut per our request, made simply because we needed more black pepper. I also wanted it because the fatty ends of the ribs have a chance to start getting crunchy at the edges of the bones, and the end cut provides for more of this fatty treat. Just as I expected, we had been blessed with one of the finest pieces of smoked meat that can be had anywhere in Texas.

Meaty layers of the thick pork spare ribs were easily peeled from the bone. Well-rendered fat throughout each rib made for exemplary juiciness, and the smoke was front and center in these simply spiced beauties. Also included on the tray were sweet-and-spicy baby back ribs. Wayne included a few for free because he was seeking our input on the trial run. It seems Tony White is from Mississippi and was looking to do something closer to his barbecue roots. At the same time, Wayne was looking for a crowd-pleasing sweet rib that tourists with an infantile understanding of spare ribs could easily identify with. I thought these new sweet ribs were good as did the rest of the table. They were well smoked and nicely tender. The seasoning wasn’t over the top, but you knew you weren’t eating anything subtle. It was also evident we weren’t eating anything in the tradition of the old Central Texas barbecue joints, and I didn’t like the new menu item purely for its symbolism. Providing a new cut with a flavor so outside of the Louie Mueller norm just so a tourist from the south could feel more at home was a ridiculous notion to me. What makes this style of barbecue so special is an uncompromising attitude of smoked meat superiority and a hearty dose of “I don’t give a shit” given to folks who don’t like it or can’t appreciate it. In the same way I wouldn’t want or expect to see mammoth smoked beef ribs for sale in North Carolina, I don’t see the point of adding accessible Southern ribs to an already flawless menu that personifies the identity of Central Texas barbecue.

Although this visit was essentially flawless, the rating here isn’t due to this single visit. The last three dating back to New Year’s Eve two years ago and another during a tour I guided through Central Texas have been exemplary of what great smoked meat should taste like. There was a time after Wayne took over full time following his father’s death that regulars were probably justified in saying that the place has lost a step, and a fear existed that it had gone downhill for good. I can now say with certainty that this is no longer the case. Louie Mueller Barbecue is great and keeps getting better.