When it comes time to fire up the smoker on Memorial Day . . . wait, let’s consider you, the average cook. You probably don’t own a smoker; you probably just own a grill. And perhaps those new summer issues of the glossy food magazines have convinced you that you can turn it into a passable smoker. “Go ahead,” they say. “Rig up that charcoal-fueled kettle for a brisket. Just get some wood chips.” Don’t do it. You’ll just end up with a poor meal and a diminished sense of self worth.

So for the average backyard cook, if all you have is a grill and a couple hours, try something different. (And if all you have is a gas grill, know that a 22-inch Weber kettle grill is just about $100 at your local hardware or sporting goods store, a purchase that would elevate your menu this–or any other–weekend.)

You might argue that grilling isn’t barbecue, and while I understand those concerns, I would counter that no concerns should exist when there’s delicious meat to be eaten. Of course a long and low smoke is the best method for cuts like brisket, shoulder clod, and pork butts, the cuts of meat that need hours of heat to break down to the point of tenderness. This methodology and philosophy is the essence of Texas barbecue–that a tough, often inexpensive cut can be transformed into something worth coveting through patience and time. But there’s also room in your arsenal of tricks to prepare the meat that requires deft skill and technique to cook just right.

And that skill seems to be inversely proportional to the meat’s cost. If you think of different cuts of meat as children (stay with me), your job is to get them through high school graduation. A brisket is basically an infant. It’s challenging, and it’s going to be a long struggle getting it to the finish line. Ribeye, strip steaks, and pork chops are already second semester juniors. Anybody who can hold tongs should be able to turn them into a decent finished product. They cost so much because they’re already juicy and tender. You’re only required to apply some seasoning and a little heat, and not meddle too much as to screw them up. Those are the extremes, but what about grilling the middle schoolers (I think I just crossed the line of taking this analogy too far)?

High direct heat works well for steaks and chops, but when we move to less expensive cuts, some of which are thicker, a two-level fire offers some advantages. A two-level fire simply means creating a hot side on your grill, and a cooler side with no heat directly underneath. For thicker cuts, starting them on the cool side helps build up the internal temp slowly and evenly, instead of high initial heat. A sustained blast of high heat from the start will at best result in uneven doneness from edge to center, and at worst get you a burnt hunk of charred meat. I know you still want that good sear that you can only get for direct heat cooking, so that’s why you finish it on the hot side.

Starting over low heat then finishing over high heat offers another advantage. Resting the meat can be the most punishing time at the end of a cook as your guests stare at you waiting for their piece. Chances are, you’ll try to please those impatient souls, cut into it too soon, and loose valuable juices. With the two-level cook, you can rest the meat after the indirect cook, and it can hold for anywhere between fifteen and 45 minutes. Then, ten minutes before you need the meat to hit the table, add some new hot charcoal and sear the meat to finish. Now you have meat hot off the grill that requires no further resting time.

I went shopping at the meat department of Central Market in Dallas yesterday to find some cuts that work well for this grilling method. While the ribeye and porterhouses were all $16/lb and up, flat iron steak, tri-tip, and bone-in pork loin were all between $7 and $10/lb with tri-tip being the priciest. I also grabbed a half chicken because my wife demands chicken. I seasoned them all liberally with a 50/50 mix of cracked black pepper and Kosher salt, then placed them on the cool side of the grill.

I tweeted a few photos, and everyone wanted to know the temperature of the fire. Here’s the thing. It doesn’t really matter. I started with a large charcoal chimney filled 2/3 of the way up. That was plenty for the thirty minutes that it took for the biggest cuts (I grilled the chicken by itself) to reach the desired internal temperature of 120 degrees. Then I took them off the grill and let them rest for about twenty minutes. While they were resting, I added more hot charcoal into the grill which was now ready for the direct-heat portion of the cook. Ten minutes later, five minutes per side, and it was all ready to eat.

The chicken I did on its own because I wanted to give it some smoke flavor. I added some wood chips directly onto the charcoal during the indirect heat portion of the cook. I routinely make fun of wood chips as a fuel source because it’s usually a discussion about smoking meat. What I was doing with the wood chips in this situation was adding smoke flavor to grilled meat, not smoking it, and wood chips work well for this. 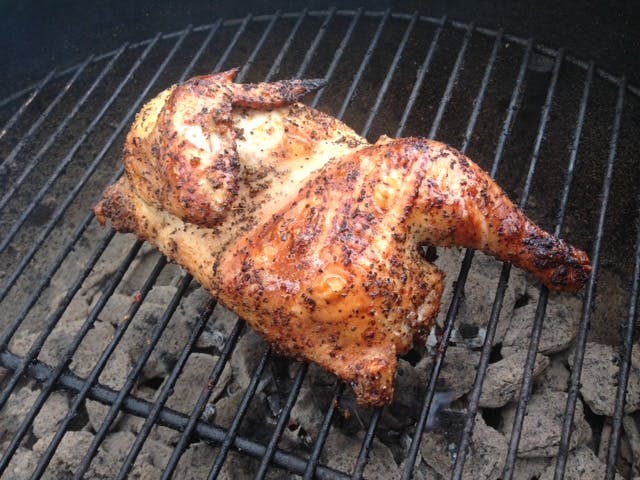 Once the chicken reached an internal temperature of 150, I flipped it to the hot side with the skin side down. The best part about cooking chicken like this is the golden crust that results. The skin doesn’t get too charred because of the short time over direct heat, but it does get super crisp because it was getting nice and dry during the first part of the cook. It solves the conundrum that you often get with smoked chicken which is a choice between juicy meat or crispy skin. With this method you get both.

I imagine that you know how to cut up a half chicken, but you must pay attention when slicing the beef. Tri-tip and flat iron steaks can be tough if you don’t follow this very simple rule: Find the grain of the meat, slice against the grain, and slice it thin. Let the carving knife do the work instead of your jaw.

At the end of the cook I had four cuts of meat that were moderately priced, required minimal time and effort, and were juicy and delicious. They even tasted a little like barbecue.