A pulled pork sandwich with slaw and sauce in between a honey bun and served in a Styrofoam container – it doesn’t get much further from the barbecue you’d expect to get in Lockhart, Texas. That’s precisely why Mad Jack’s BBQ Shack has been successful over the past year. Instead of trying to beat the barbecue temples in town at their own game, Mad Jack’s went a different direction than meat market style barbecue.

James Jackson owns the place, and he realizes his venture is a little crazy. He does have a sense of humor exemplified by his motto: “Lockhart’s Best BBQ, East of Highway 183.” Clever, since Black’s, Kreuz Market, Smitty’s, and Chisholm Trail are all west of the highway that bisects this small Central Texas town. A barbecue food truck parked in the middle of the barbecue capital of Texas sounds far-fetched any way you slice it, but Jackson is no naive newby in Lockhart. His dad owned the Dodge dealership that was on the land where his trailer is currently parked. He also went to high school here, and one of his old classmates is also one of his biggest fans.

Roy Perez eats his share of barbecue as the longtime pitmaster at Kreuz Market, but after a couple decades of taste-testing the same barbecue, Perez likes the myriad options here. The menu is vast. They offer eight sandwiches, a half dozen sides, and even a barbecue burrito. I went for a more traditional combo plate along with a pulled pork sandwich. 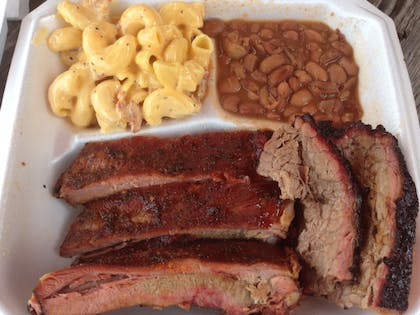 The ribs were well cooked and had a great texture, but the smoke was missing. There was so much sugar in a heavily applied rub that each bite tasted grainy. What the ribs lacked in bark, the brisket made up for. That black crust and a nice smoke ring sent my hopes high. The first bite was juicy and the beef was just as tender as you can get without the slices falling apart. One small quibble was the intense saltiness, but this is brisket that can hold its own in a town built on smoked beef.

A side of mac & cheese was decadently creamy. Bits of bacon and a good dose of black pepper gave it a smoky flavor. The pinto beans also had some bits of smoked meat mixed in, and they were fantastic.

The aforementioned pulled pork sandwich was impressive. The bun is warm, sweet, and squishy while the slaw is cool and crunchy, but the smoky pork shines right through. They pull the meat to order, so it’s still juicy. It’s also a generous portion without it feeling overstuffed. It might not be traditional Texas barbecue, but this is one very good sandwich. 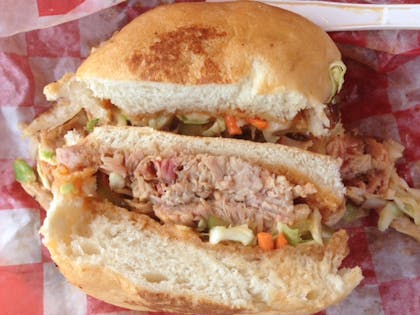 Most diners, myself included, were taking their orders to go, but you don’t have to. A new screened in “Picnic Shack” was recently built adjacent to the trailer, so you can eat indoors if you like. Out back there are a couple picnic tables too, but future plans for the backyard are much more grand. A new and very large smoker sits by waiting to get into the rotation, and Jackson plans to renovate an old bus into more dining space. With all this activity, Mad Jack’s is looking like a whole lot more than just a food truck. 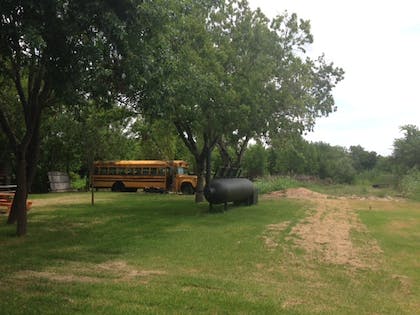 Mad Jack’s is currently at a crossroads. Don’t bother going by this weekend because the crew is on vacation. A recent Facebook post suggested they might be doing a bit of reflection too. “Need time to think, decide if it would be wise (financially) to move forward.” It seems the city is requiring them to add permanent restrooms in order to remain open. My hope is that you’ll be able to start lining up next Wednesday at 11:00 for Lockhart’s best pulled pork sandwich.