High-caliber Texas-style barbecue keeps popping up in the oddest places. Two weeks ago I found some great brisket in Los Angeles, and this past weekend the same thing happened in Portland, Oregon. I visited a tiny place called Matt’s BBQ, and its origin story is a wonderful microcosm that highlights the deep reach of Texas barbecue.

In April 2013, Australian chef Craig McShane traveled to the Lone Star State expressly to learn the ways of smoked meat. He considers Live Oak BBQ in Austin (now-defunct) as one of his major barbecue influences, and he also spent time in Houston learning the craft from David Klose, famed pit-maker to the pitmaster stars. With this bevy of knowledge (and a Klose smoker), McShane returned to Melbourne, Australia, where he began smoking Texas-style barbecue at The Gem Bar.

Enter Long Island-native Matt Vicedomini. After a bit of a circuitous path that took him through New Zealand, Vicedomini finally landed at Gem Bar, and McShane passed along some of the lessons he learned in Texas. Vicedomini eventually returned to America, bypassing the East Coast for the West, and set up his own barbecue trailer in Oregon. And that’s the strange tale of how how a New Yorker brought Texas-style barbecue—that he learned to cook while living Australia—to a trailer in a pawn shop parking lot in Portland. 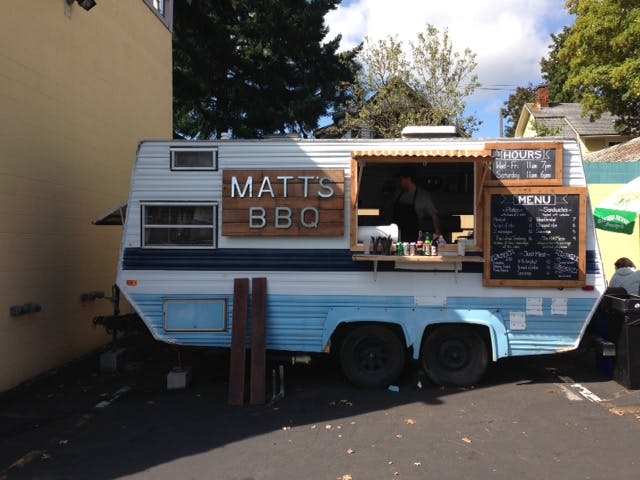 Matt’s BBQ opened in early July and is already getting plenty of early press from local food critics, including a good review from The Oregonian‘s Michael Russell, who acted as my smoked-meats guide during a recent trip to the city. We made Matt’s our first stop because Vicedomini only cooks two briskets a day. (Another recent review mentioned how quickly items can sell out, so we made sure to be there and ready to order by 11:30.) 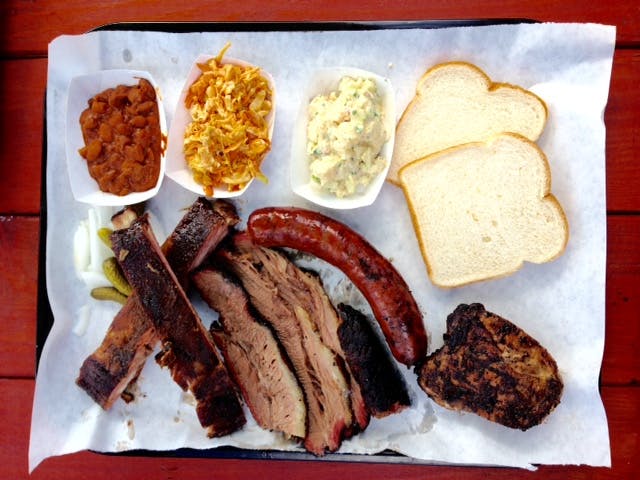 “The Whole Shebang” combo is exactly what it sounds like: an opportunity to try basically everything on the menu—including brisket, sausage, ribs, and all three sides—for just $16. We added a chicken thigh that was on special, but Vicedomini told me by email that it will now be on the regular menu. That good to hear as it was our second-favorite item. In a rare twist for places outside of the state, it was the brisket that took top honors. (Vicedomini told me he smokes it with white oak, although he’s not loyal to the wood. In an email exchange he noted pragmatically that “a customer has some year old cherry wood in his yard that he wants to trade me for brisket so I’ll probably start adding that into the mix.”)

Now about that brisket. It was simply seasoned and had a balanced smokiness. Many pitmasters new to the craft undercook the meat, but Vicedomini’s texture was just right, and even the lean slices were juicy.

While the brisket hit all the checkmarks of Central Texas barbecue, the ribs lacked a focus in flavor. Too much rub was mounded on them to let any sort of bark form, and the flavors were muddied as a result. The sausage was a better effort. The beef link was juicy with a good snap, but it could have used more smoke.

Despite the flaws there was much to like, and knowing I’d be attending Aaron Franklin’s special barbecue dinner later in the day, it was hard not to notice the similarities in their humble beginnings as businesses, particularly that both opened in old trailers they personally refurbished. And of course, the long shadow of Franklin was cast all the way out here in Portland. When Vicedomini recognized me, he said he wanted Franklin to come visit, though, he admitted Franklin Barbecue was one place he chose not to visit during an Austin barbecue journey. Maybe he can go back for some lessons on ribs and the pulled pork he’s toying with. Until then, Matt’s BBQ can rest on a solid foundation of impressive smoked beef.