The sign outside reads “World Famous” and Louis McMillan won’t hesitate to tell you how good his barbecue is. He was about done for the day, so we admittedly got the tail end of the days offering, but this wasn’t praiseworthy. 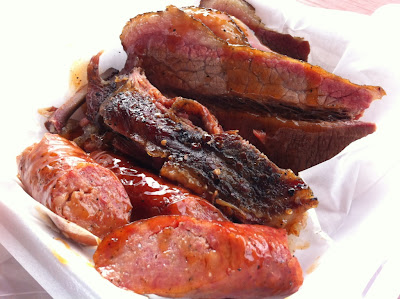 Sausage was barely warmed through, and I had to question whether it had even hit the smoker. The ribs certainly had. They were so overcooked that the bones were rattling around in the to-go box. They had a decent smokiness to them, but the meat was mush that tasted mostly of the sauce (requested on the side) that ended up on top of the meat. Brisket was sliced thick and looked appetizing, but I knew something was off as soon as I grabbed a slice. It was so undercooked that I couldn’t even squeeze through the tough line of fat. Pulling apart a slice of beef was a chore, but not as bad as trying to chew it.