I recently posted the photo below on Twitter, and the reaction was swift and severe (read it all here). I said it was some of the worst barbecue I’d ever eaten. One commenter was sympathetic, saying, “Sorry you had to eat it!” But I didn’t really have to eat it. The same can’t be said for many in the military whose only choices on the battlefield might be a Meal Ready to Eat (MRE) of beef brisket with gravy or nothing.

The disgust in response to the photo was the reaction I was expecting, which is just one more reason we should all appreciate what our veterans and active military have done and continue to do. While we’re at home enjoying thick slices of fatty smoked brisket, a soldier is presented with a dish of brisket that contains not only liquid smoke, but also an ingredient called “grill flavor.” As you might imagine, it was as unappetizing as it looks, but that’s barbecue on the front lines.

I also taste-tested “Menu 16 Pork Rib,” which is worrisomely advertised as “Imitation” on the label. Liquid smoke and grill flavor once again mingled together in an effort to imitate the flavor of a backyard barbecue, or maybe that was the job of the sweet sauce that came on the side. 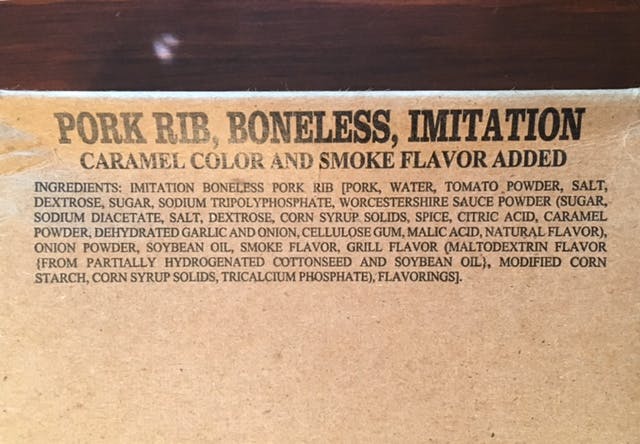 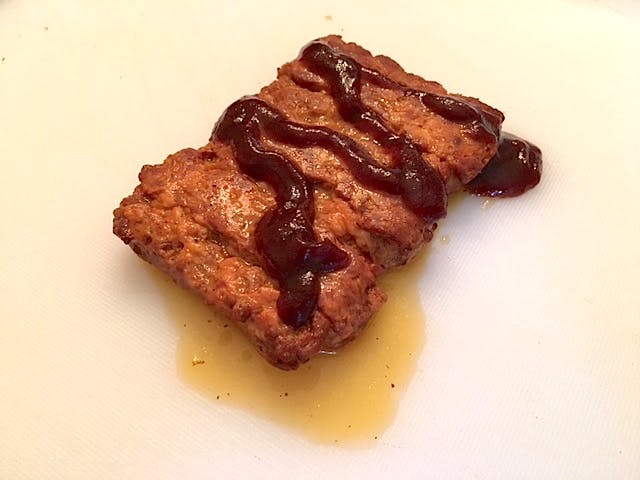 The pork rib entree tasted like a mix between jerky and a water-logged chicken nugget. The barbecue sauce barely helped. A chef who performed some MRE taste tests for Serious Eats aptly described the flavor as something that “Tastes like nitrates mixed with liquid smoke.” A couple slices of a bread-like substance and some squeezable cheese came alongside, presumably for building a sandwich. I tried that, but I suggest keeping things a la carte.

Any veteran reading this who has suffered through a few MREs would laugh at the fact that I sought these out and paid for them. AmeriQual in Evansville, Indiana–the largest MRE provider for the military–manufactured the ones I purchased. AmeriQual was founded in 1987 after the military moved away from canned and freeze-dried foods to MREs in 1980. Now there are 24 entrees to choose from on the MRE menu, brisket and pork ribs being two of them. Tasty or not, I wondered how they designed a packet of meat to last more than three years.

We’re familiar with shelf-stable meats like beef jerky, but they require dehydration along with nitrates to keep bacteria from growing. These MREs had meat and bread that required no rehydrating to eat, which is why they are a wonder of food engineering. Stephen Moody is the director of the Combat Feeding Directorate where MREs are developed. He was interviewed on a recent episode of the Gravy podcast, on which he explained how manufacturers manage to keep so much water in the meal items. “We did that by controlling the water activity and the pH of the different components within the product so that they wouldn’t allow bacteria to grow.” Water activity is controlled by ensuring that any remaining water is bound to sugars or salt. Although water is still present, I’d hesitate to call the meat juicy. The low moisture also creates some odd textures like the bread that was somewhere between a stale cracker and old pita bread.

That MREs aren’t beloved for their flavor isn’t news to anyone. Last year, the National Museum of the Marine Corps even held a MRE cook-off where contestants were essentially charged with hacking an MRE (a.k.a. Meals Rarely Edible) into something decent. It was another common complaint about MREs that I didn’t learn until I had eaten a good portion of the pork ribs. It seems they’re also know for their constipation side effect. Blame it on the water activity, I guess.

Thankfully for our veterans, they have some good MRE alternatives today if they find themselves in Texas. I’ve seen many veteran discounts offered, and Heim Barbecue in Fort Worth is giving barbecue meals away to veterans. In McAllen there will be a barbecue celebration for veterans at the Alfredo Gonzalez Texas State Veterans Home, and a community barbecue is being held in Millersview, just east of San Angelo. So enjoy your veterans day and eat some barbecue, hopefully not from a pouch.