“It needs more dust,” I said. Tuffy Stone, whose Cool Smoke barbecue team is one of most prolific in the country, was about to close a styrofoam box full of pork shoulder that was bound for the judge’s table. Our team, most of which I’d first met the day prior, surrounded the table preparing the pork “blind box,” and Stone handed me a piece to try. I offered my critique, and Stone obliged.

My advice might have sunk Cool Smoke’s chances at their first championship at Memphis in May.

Officially titled the World Championship Barbecue Cooking Contest, this pork-centric contest has been held for the past 39 years as part of the month-long Memphis in May celebration. The competition started in a vacant lot with just twenty entrants, and has now grown to 235 teams that are scattered along a mile’s worth of Mississippi River frontage in Lee Park. Teams can pay as much as $4,500 just to rent their space at the competition (including a $120 worth of liability insurance), and second place winnings won’t even cover your rent.

Teams choose one of three pork categories to enter in the contest, using rules unique to Memphis in May . Cool Smoke and 52 other teams chose to cook pork shoulder, the rest turned in either whole hog or pork ribs. These pork shoulders were no Boston butts: ten skin-on, whole pork shoulders, from neck to shank, filled a couple of coolers behind the Cool Smoke tent, and a big banner emblazoned with “Smithfield” told passers-by where the pork came from. Meat prep began Friday morning at 9:30, with turn-in scheduled for 11:00 the next morning. 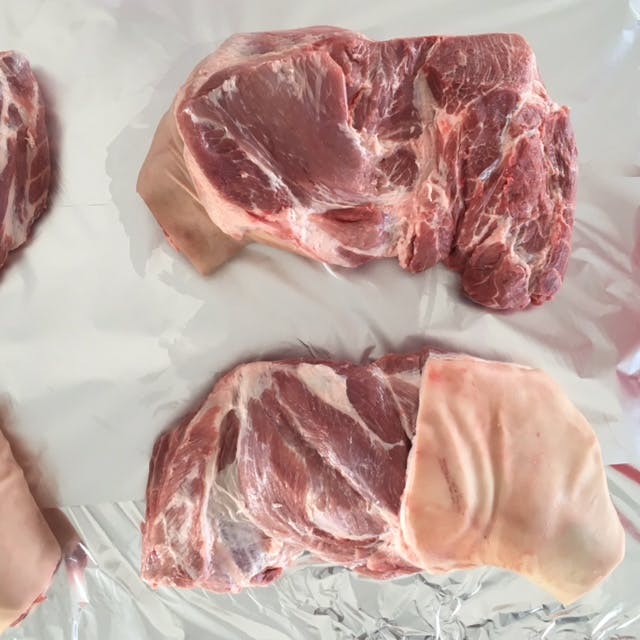 I was perfecting hog skin removal as other team members trickled into the tent on Friday. With eleven of us total, I thought we’d be done prepping the shoulders by lunch. Let’s just say there’s more work that goes into this competition barbecue stuff than I thought. Sure, there’s plenty of beer drinking, loud music, and one-hitters at Memphis in May, but the teams with their eyes on the prize bust their asses. Tuffy Stone is definitely in the latter category. Although he has multiple championships at notable barbecue competitions American Royal and The Jack, Stone is still chasing a crown at Memphis in May. He came closest in 2010 when he snagged first in pork shoulder, but Yazoo’s Delta Q took top honors with their whole hog. Two years ago, Stone got a second-place nod in ribs. Like a hundred other cooks gathered in Memphis, he thought this might be his year. 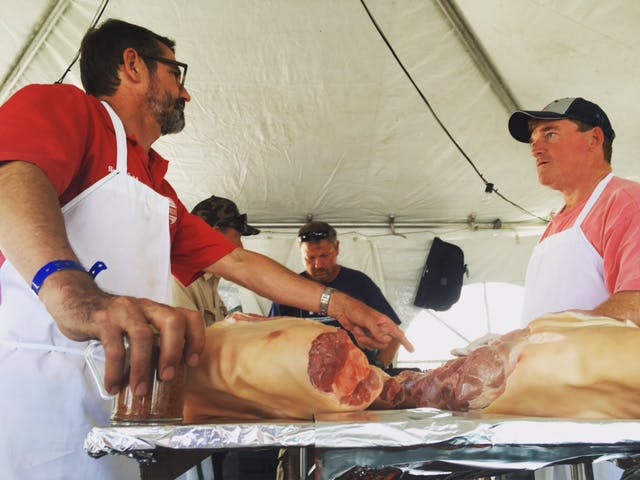 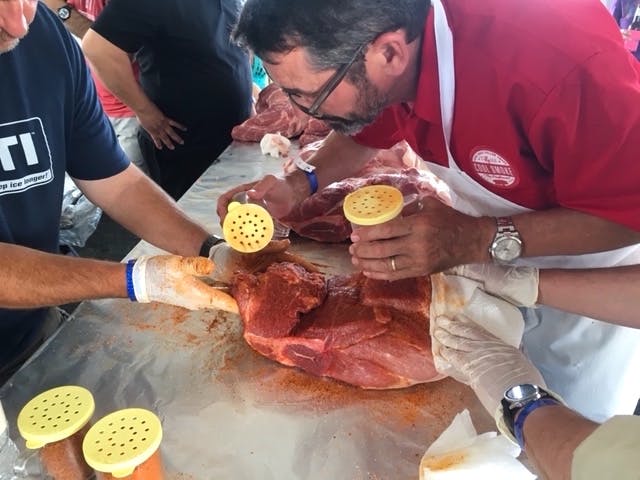 In an environment dominated by waist sizes bordering on half a hundred, Tuffy Stone, in his size 32 Kühl hiking pants and signature glasses (his nickname is The Professor), strikes a different image. It’s an extended social hour in most tents at Memphis in May, but Stone’s looks more like a workshop. Toolboxes and plastic bins are numbered and everything has its place. The only music creeps in from adjacent tents, and the drink of choice is bottled water. Stone doesn’t smoke and saves the drinking until after turn-in. The only thing he does in excess is prepare, which is why it took about eight hours to complete the trimming, rubbing, and injecting of ten pork shoulders. 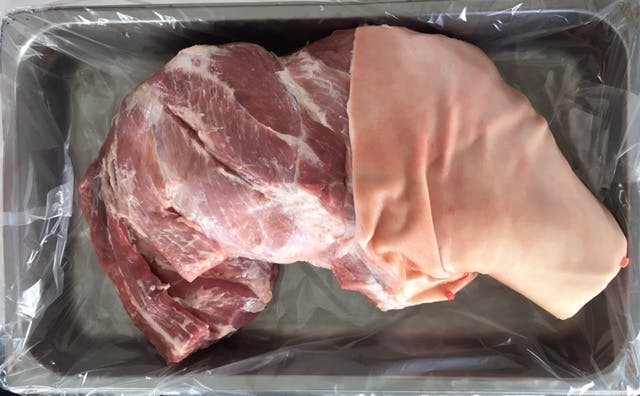 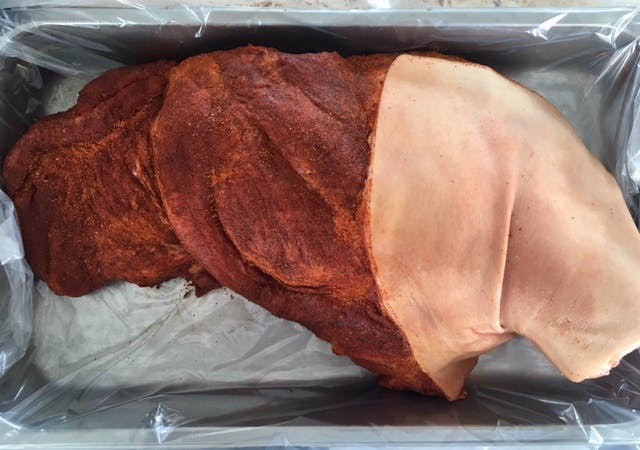 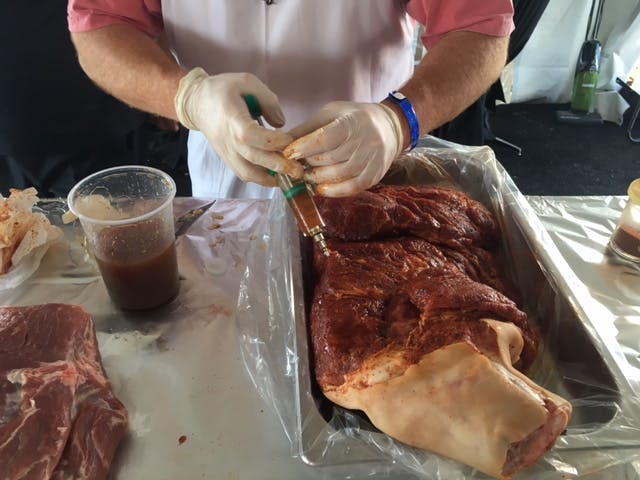 Most competition cooks will tell you that they cook for the judges, who often demand sweetness over any other flavor. That’s not how they would cook at home, and Stone is no different. In fact, he couldn’t stop talking about the block pit he’d helped build the weekend before. A son of a friend had a genius idea for an Eagle Scout project that included a pit and a whole hog. It was seasoned simply and cooked all night over hardwood coals. When Stone described the scene, the pit, and the hog, he was like a man retelling an encounter with long-lost friend. But there weren’t any block pits at Memphis in May. 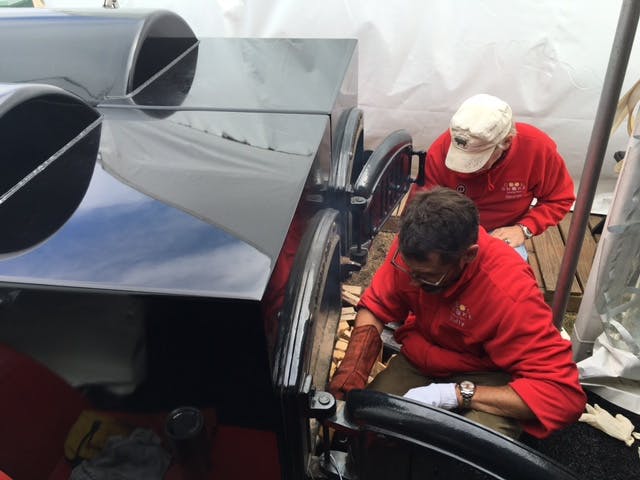 “We are what we repeatedly do. Excellence, then, is not an act, but a habit.” That’s a quote by Will Durant, but is usually attributed to Aristotle—just as it was on the back of one team member’s t-shirt. That sums up the attitude of most barbecue competition cooks, or at least the successful ones. If it ain’t broke don’t fix it, right? For this competition, Stone paid neither Aristotle or Durant any mind, choosing instead to concoct a new injection recipe that he’d never used before. It had a focus on savory flavors rather than the sickening sweetness of most competition barbecue. Maybe he was trying to break another habit—cooking barbecue he didn’t really enjoy— but Stone was certainly taking a risk. 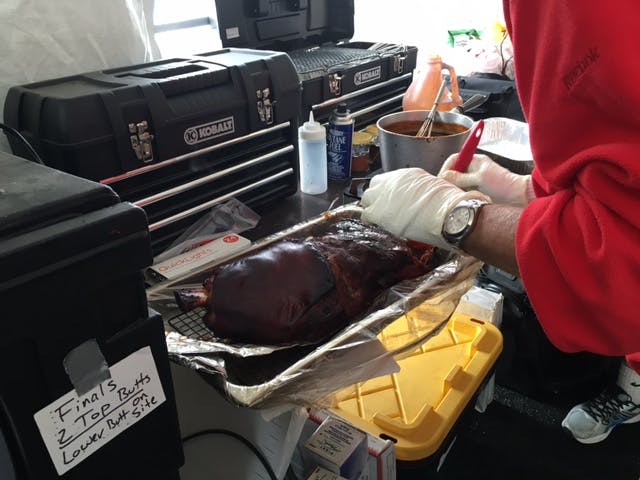 On Saturday morning, things in the Cool Smoke tent were tense. Stone took center stage with a couple of the completed pork shoulders. George Stone, Tuffy’s father and perennial teammate, continued to feed carefully whittled logs into the smoker’s firebox. The other nine team members grasped for their own viability, jumping at the chance to wipe sauce from the table, vacuum the indoor/outdoor carpet, and clear away trash. I took to moistening paper towels in order to look essential. Clorox wipes were plentiful, but that’s not a smell you want to introduce to the judges no matter how well it cleans a white platter. 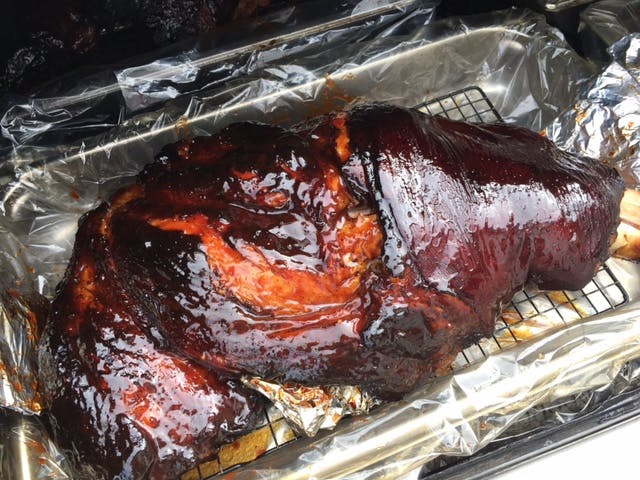 Building the blind box was the first order of business. Multiple chunks of pork are picked through, and the good ones are collected to be sauced and seasoned. It was at this step when I, an admitted salt-fiend, requested more “dust”, a fine powder of barbecue rub ingredients. The christened pork was then layered into a styrofoam box, each one getting a coating of sauce from a silicon brush. The meat arrangement was a forced imitation of randomness; two rows of sliced “money muscle,” an especially tender portion from the top edge of the shoulder, topped the pulled pork. It was gorgeous, but the lid was closed a second after it was done, and the blind box was off to a tent full of judges. 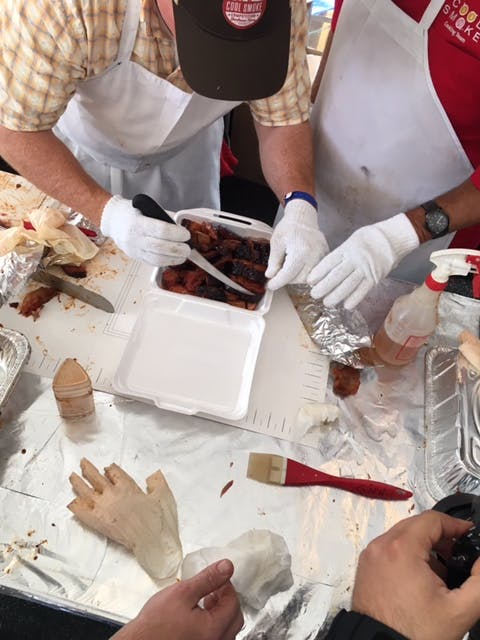 There are two components to the judging at Memphis in May, which makes it tricky. After the blind box is delivered, one of three on-site judges appears at the front gate. Their purpose is to assess the cook’s skills through a presentation. Stone discussed the virtues of his Jambo smoker (its builder, Jamie Geer, was a Cool Smoke team member), the hickory wood that fueled it, and the quality of the meat. As he spoke, other team members handed the judges pork to sample, opened their water bottles, and in one case even fetched a piece of pork skin from the tent. In other words, it’s a sanctioned dog-and-pony show for three successive judges.

It didn’t take long to learn that the three on-site judges loved the pork. They had all given Cool Smoke a perfect 10. We were giddy, and I even convinced Stone (who usually doesn’t eat the barbecue he turns in) to take a bite of his newly concocted pork recipe. It wasn’t just good for competition barbecue, this was some incredible pork. “Now I know we’re doomed,” Stone laughed, recalling a barbecue cook superstition that loving the barbecue you turn in is the first sign that you won’t win. Unfortunately, he was right. 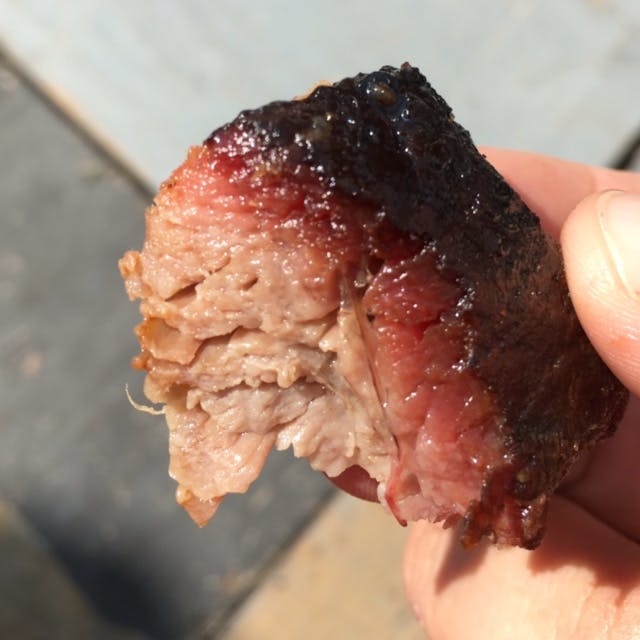 Roars of congratulations sprung up around us as tickets were handed out to the finals for three teams from each category. We liked our chances a lot more than the judges liked our blind box, though. There would be no finals for Cool Smoke, and not even a top ten finish in pork shoulder. Myron Mixon, Stone’s co-host on the BBQ Pitmasters television show who has none of Stone’s humility, took home the grand champion crown. On my way out of the festival, I overheard a team rejoicing after getting the final score sheet. “We beat Tuffy Stone!” they exclaimed. Cool Smoke has finished 28th, or was it 34th? It didn’t matter.

The next day, I thanked Stone via text message for the opportunity to be on the team. I wasn’t sure if my poor palate would keep me off of future ones or not. He didn’t respond until the next day: “We have plans to make it better next year.” I figured that meant a new taster, but he added, “You are part of the team whenever you can make it!” I promised to meet him in Memphis a day earlier in 2017 so we could build a block pit. “Sounds good!” he wrote back. Now I’ve got a year to convince Tuffy Stone that he can win Memphis in May with another new recipe.