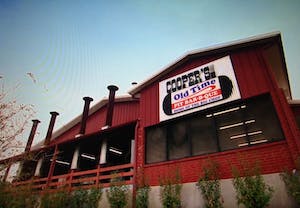 Terry Wootan is best known as the owner of Cooper’s Old Time Pit Bar-B-Q, and some in Llano might know him for his real estate business. But the I bet few would expect to see him as a dramatic actor on a television show.

That might be what happened a couple of weeks back when he appeared on Mystery Diners on the Food Network. The premise of the show was that the secret family sauce recipe had been stolen. Host Charles Stiles brought in a team of mystery diners and hidden cameras to find out who was selling the recipe.

The short story is that Terry suspected Bobby, his kitchen manager at the Cooper’s in Fort Worth. It turned out it was Terry’s nephew Michael who’d been selling the sauce to an Arlington-based barbecue food truck. Michael was disowned from the family business. End of show.

While I was watching the show it just seemed silly, then I started wondering if any of this “reality show” was real. It was one of Terry’s final lines that really got me wondering the most. As the show signed off he said, “I am grateful for Michael [the scorned nephew], the knucklehead, because he inspired me to start bottling and selling my own barbecue sauce at my discretion.” Cooper’s has been bottling and selling their sauce for years. This is not a recent turn of events.

I went to the Cooper’s in Fort Worth to see if I could find Bobby the kitchen manager or get some stories about Michael the ex-manager.

I stood in a short line for a big chop and a half chicken. I went for the option to have them dipped in that famous sauce. Bud Kennedy of the Fort Worth Star-Telegram joined me for lunch. He thought the story line of the Mystery Diners episode was humorous, but he found another recent story just as funny given the premise of the show—Billy Bob’s across the street in Fort Worth now serves Cooper’s barbecue. Ironically, they don’t use their sauce, but instead provide a sweet sauce of their own.

During our visit we talked with Jake Rogers, the general manager who has held that role since this location opened back in 2010. He didn’t offer up any stories about Michael or if they shared some managerial duties in the past. He just grinned and said the show was all Terry’s deal. Jake said I would have to talk with Terry for more details. Other employees just shook their heads and grinned when I asked about Bobby and Michael. Maybe Terry could help clear things up.

When I asked Terry about his role on Mystery Diners, he said in an email “Sauce sales are good! I can’t talk about the show!” A post on a family member’s Facebook page the night the show aired suggested it might be less than a reality show. “Paw Paw Wootan…on Food Network. Totally scripted…hilarious! I never knew he was and actor. ; )” 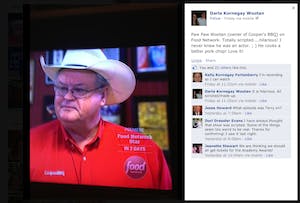 I wondered if the Mystery Diners crew had contacted other local barbecue joints. I asked around, and it turns out that Justin Fourton, the owner of Pecan Lodge heard from the producers of Mystery Diners late last year. Justin said he told them that he didn’t really have any problems at the restaurant that needed investigated. The producers were not to be dissuaded. “They said they could take care of the controversy part,” he told me. They the producers offered to come up with a story line for Pecan Lodge. Fourton declined. Jill Bergus owns Lockhart Smokehouse with her husband Jeff. When I asked her about the show, she also said she was contacted: “They said they could make up a story about our secret sauce recipe being stolen.” Lockhart Smokehouse is not famous for their sauce—signs in the restaurant remind you that it’s not necessary to use sauce at all. “I guess they hadn’t done much research,” she said with a laugh. That “secret sauce recipe” story line sounds familiar.

I contacted the Mystery Diners producers, T Group Productions, to ask of the story lines are fabricated. All I received in reply was “We appreciate your interest in our show, however, all media inquiries must go through the network.” So I asked the Food Network if the show was sold to them as a reality show or a made for television drama. This was the canned response “We appreciate you taking the time to share your concerns and comments with us. We will be sure to pass your comments along to the programming department for review.” I haven’t heard anything back from the programming department, but forgive me if I don’t hold my breath.

If you’re curious about the Cooper’s sauce, Steven Raichlen in a New York Times article provides a recipe inspired by Cooper’s sauce back in 2002. I wish I could say that this show seems inspired by reality. Instead, it seems like one thirty-minute-long commercial. Charles Stiles is pimping his services as a mystery diner/shopper/voyeur for his Business Evaluation Services company, and Terry Wootan got to share that spotlight to move a few more cases of his sauce.

There are a few others out there that have questioned the legitimacy of the show. I don’t know if fabricating the story lines, if that’s what they’re doing, is even hurting anyone. I’m just surprised to see a popular and well respected Texas barbecue joint going to these lengths to make a little extra cash. I guess it’s hard out there, and pimping sauce ain’t easy.