Eric Hansen has been passionate about barbecue for years, but his new barbecue food truck, Not Just Q, started smoking last April. If Hansen’s name is familiar, it might be because it was included in most every announcement relating to the Slow Bone’s opening in Dallas. His stint as the pitmaster there was short lived. Call it professional differences, but Hansen decided to launch a barbecue business of his own.

News of the new barbecue trailer in Dallas caught my eye just before they opened. Their introduction to locals came via their stark new website. The only message was “The Best Barbecue in the State. Soon!” This was a bold claim, especially for a food truck that wasn’t yet open, and owner Eric Hansen heard about it from all sides. He quickly erased the statement, and went about quietly getting his new business off the ground.

Now things are going well in the rolling smoke wagon. Not Just Q makes regular appearances at the Truck Yard* in Dallas, a sort of outdoor food truck food court with a great beer selection. Despite the name of Not Just Q and Hansen’s Kansas City roots, most of what you’ll find is straight-up Texas barbecue and some very non-KC tacos. 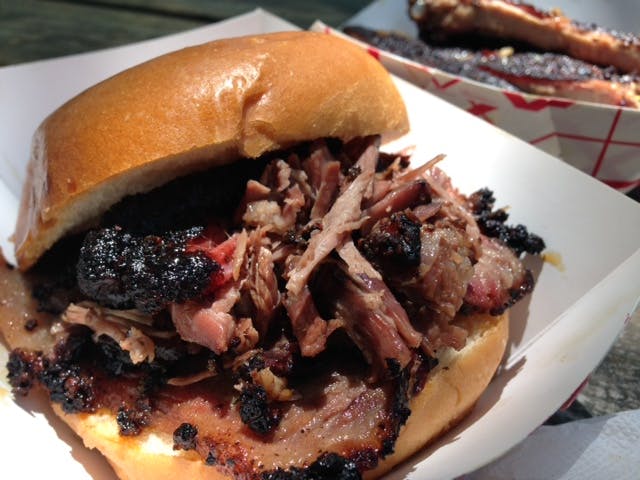 I’ve stopped in at the Truck Yard three times over the last three weeks trying most everything on the menu. I’ve tried the brisket on every visit, and it’s mostly been a solid option. On two visits it was smoky, tender, and juicy with a great bark. It was tough and undercooked on the latest visit, and Hansen blamed a faulty temperature control knob on his trailer-mounted Ole Hickory smoker. The briskets didn’t go on until it could be repaired at 5:00 in the morning. It might have been cruel, but I had to remind him that offset smokers don’t have that problem. Either way, a better choice would have been not serving the brisket until it was done, but enough scolding. 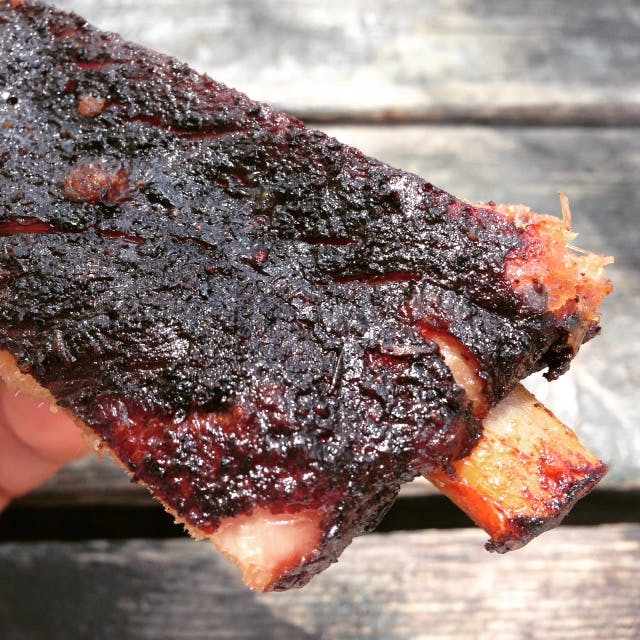 On the same day I had some stunning pork ribs. The meat gets plenty of rub, but the bark remains stout. Clean bones started stacking up before I could stop, and just like Texas barbecue should be, they didn’t need sauce. The same can be said for the pulled pork which gets plenty of flavor from the smoke and the rub. It also gets pulled to order and stays moist because of that. 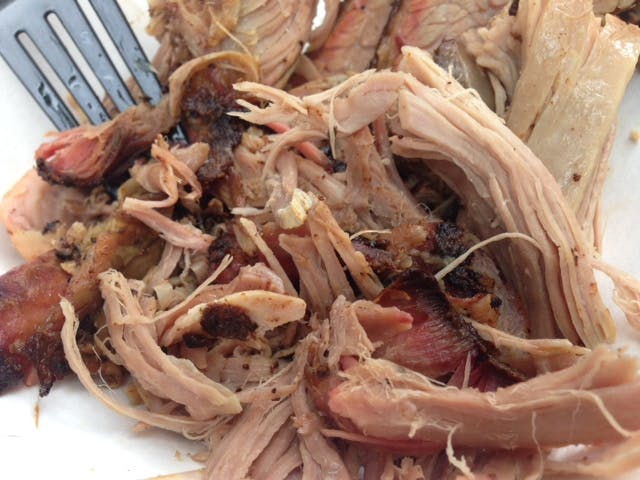 The poultry game is also strong. A smoked chicken quarter had good smoke, beautiful crispy skin, and juicy meat. It’s basic which is why it’s so good. A more forceful rub goes on the turkey which has a more Cajun flavor to it. The turkey was juicy, but I barely tasted the smoke. A basic smoked sausage was well executed, but didn’t compete with the other menu options for continued interest. 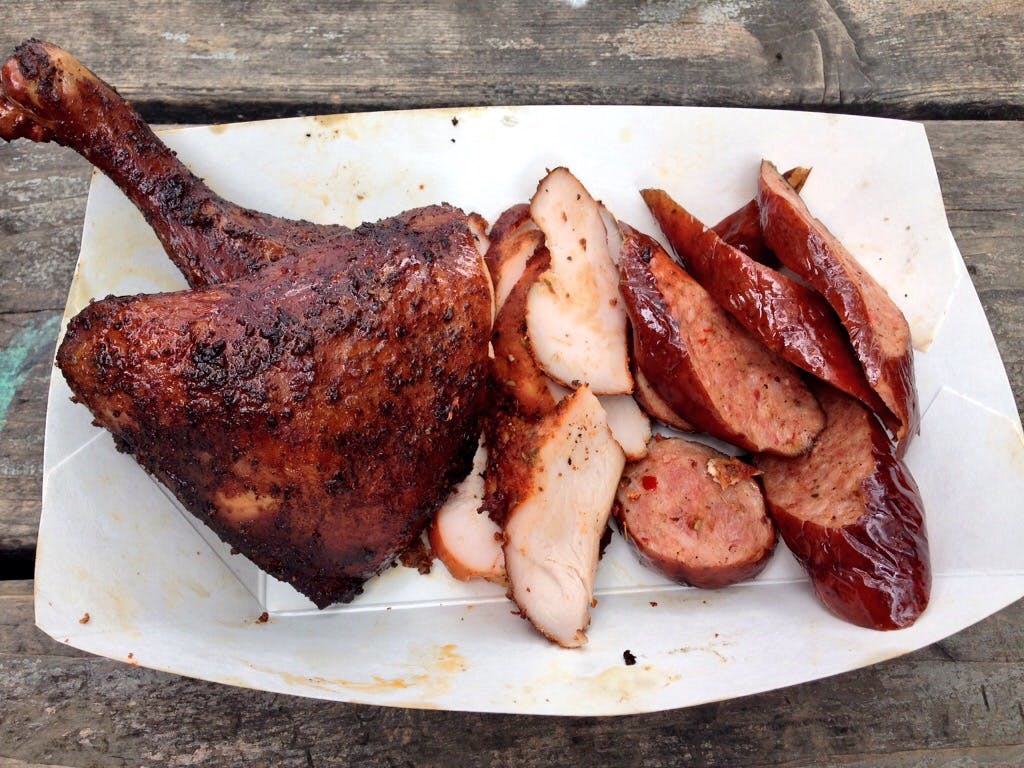 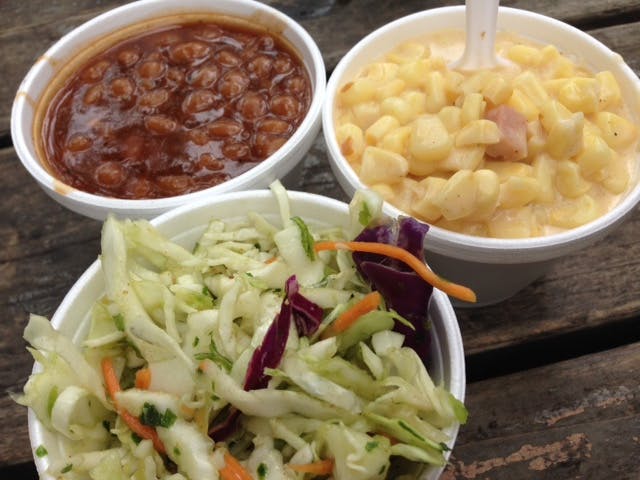 Along with some good sides, especially the cheesy corn with diced ham, that’s the Q side of things. The other portion of the menu focuses on tacos. Hansen isn’t a tortilla maker, but he knows a good one. La Nueva Fresh & Hot makes some of the best in town, and Hansen pulls them one by one from a warm stack of tortillas in his warmer. There’s no need for doubling upon the tortillas when they’re of this quality, but I’d prefer these tacos ($8 for two) be a little cheaper with less filling. The tortillas can hardly contain the heaping helping. 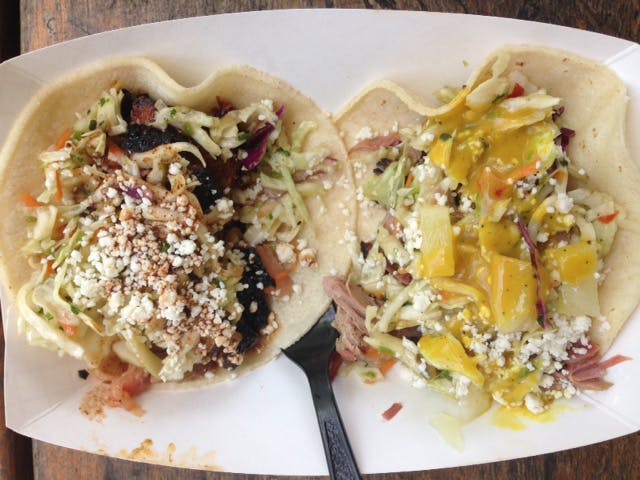 The meat/slaw/barbecue sauce combination was predictable, and not even the addition of some cotija made them compelling on the first visit. Thankfully, the meat here wasn’t scraps covered in debris, but good, solid barbecue. The latest visit was an improvement with Hansen using crisp cabbage and a tangier sauce. I think some good salsa would be a better option, especially considering Hansen’s skill with peppers. 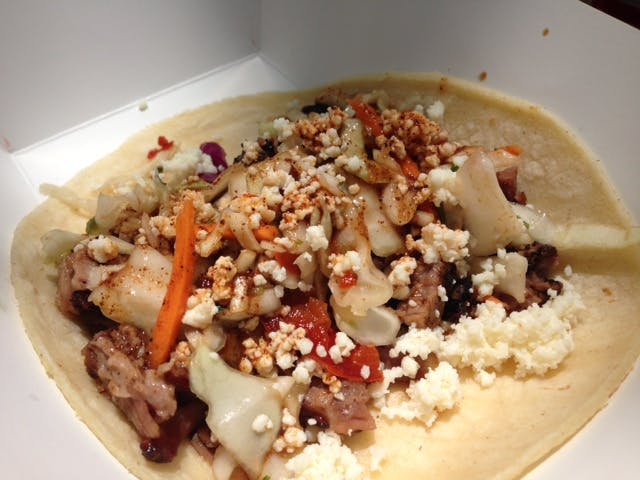 I could take or leave the tacos, but only because I know the real star on the Not Just Q menu. It’s a little cup of chili verde for $4. It looks like an afterthought, or an elevated side item on the handwritten menu, but it was the item that had me coming back again and again. Unfortunately, I had to keep returning because it wasn’t available on two of three visits. There were more excuses about pepper deliveries despite the Fiesta a couple blocks away, but if you’re lucky enough to find it, don’t miss it.

Hansen roasts Anaheim and poblano peppers to make the verde sauce. He smokes pork shoulders, cubes them, mixes them into the verde sauce, and cooks the whole thing down into a meaty stew with incredible depth of flavor. A cupful is generous enough for a few tacos, so ask for some tortillas on the side. Skip the option for verde tacos which include the cabbage and cheese. You want to enjoy this chili verde on its own. It’s one of the best things I’ve eaten at a barbecue joint recently, so it’s too bad it’s so elusive.

Not Just Q could work on their consistency, but their high side is certainly up there. I don’t want to let them off the hook just because it’s a food truck, and because it’s obvious that Hansen is talented. He is also dedicated to making all his menu items from scratch (minus the well-sourced tortillas and buns). That’s a great foundation for any barbecue joint, and Not Just Q is a great addition to the growing group of good barbecue joints in Dallas.

* The address listed is for the Truck Yard off of Lower Greenville because Not Just Q is there more often than anywhere else (ten times in July), but please check their social media for updates.