I was eating the third of several courses at a Texas Monthly dinner hosted by Chris Shepherd at Underbelly in Houston. On the family-style platter were meaty ribbons of beef belly (smoked by Ronnie Killen) topped with a chile mostarda. Underneath were bright orange carrots with a black crust. They were tender on the outside, but still crunchy inside. The flavor was intensely sweet, but it was the rushes of barbecue flavor that knocked me back. It had been a long day of meat-eating, so I found myself going back for more carrots. I asked Chris Shepherd his secret and he laughed. “We light a Weber Kettle full of charcoal in the back, and my kitchen guys just throw the carrots right in the coals.” No seasoning, no sauce. Nothing but carrots and fire. I had to try it.

During a test run during a beach vacation (cooking in the coals there was admittedly largely out of necessity), I went for it. I threw two pounds of unpeeled, untrimmed carrots right into a pile of white-hot lump charcoal. The guests looked on in horror as I pulled each blackened and blistered carrot from the fire. I let them cool slightly, peeled off the black outer layer, sliced them and served them. They were like candied carrots with the additional flavor of roasted marshmallows. Last night, I tried it again in my backyard fire pit. 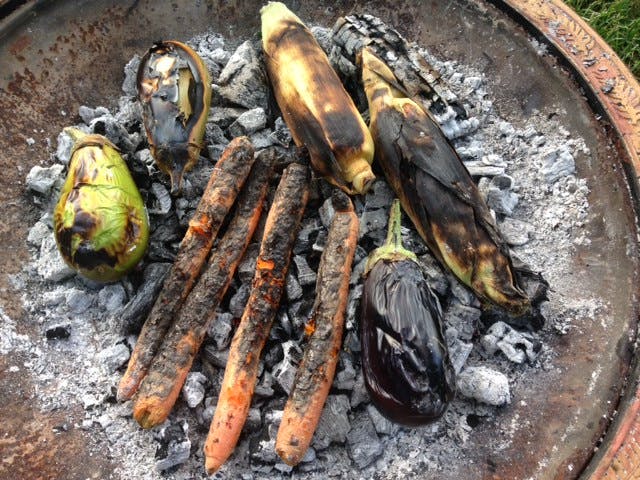 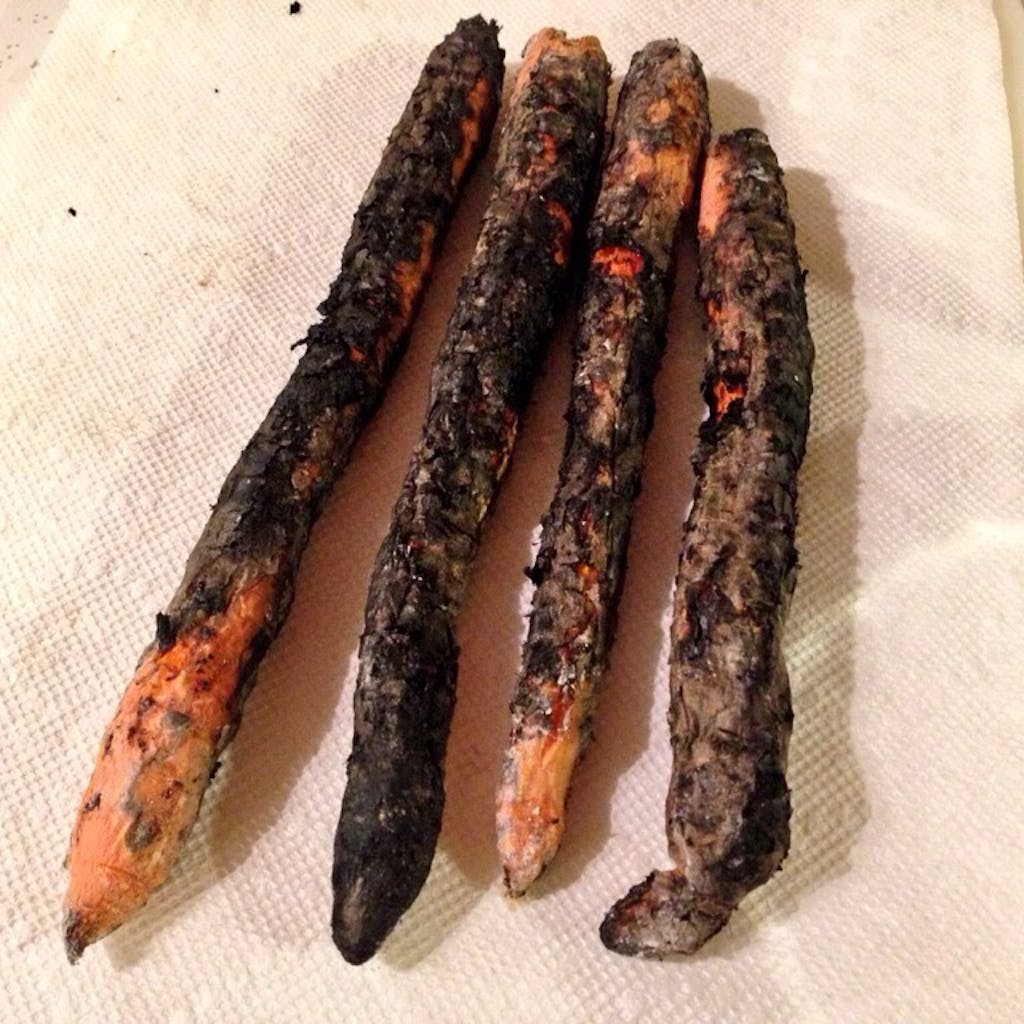 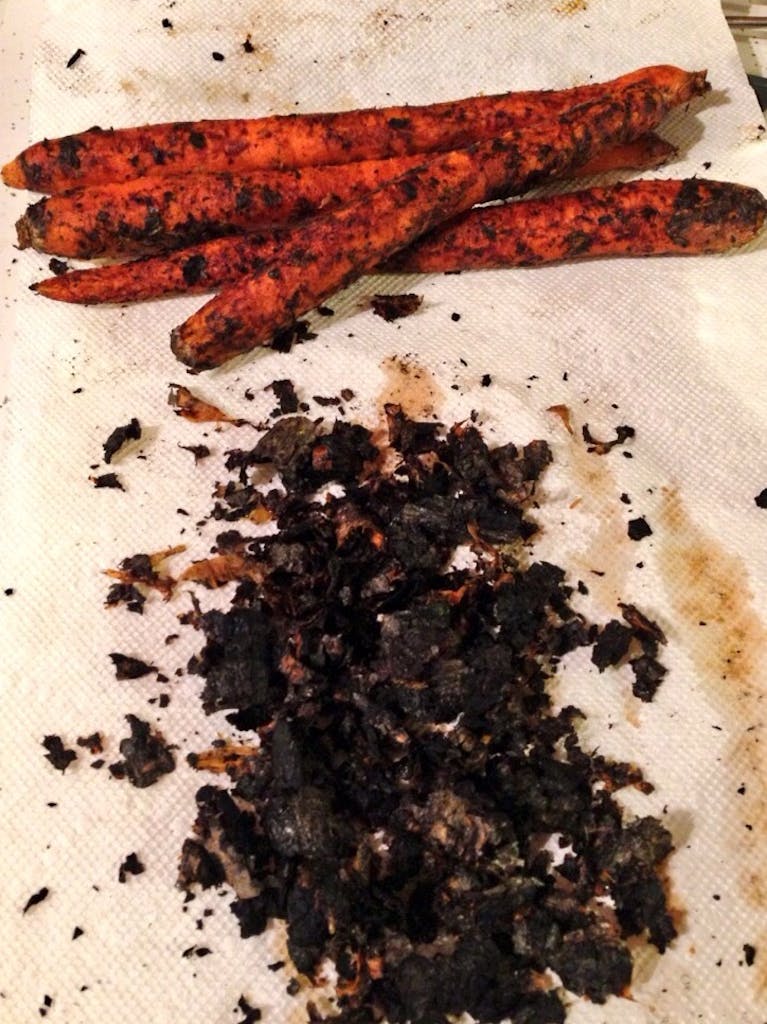 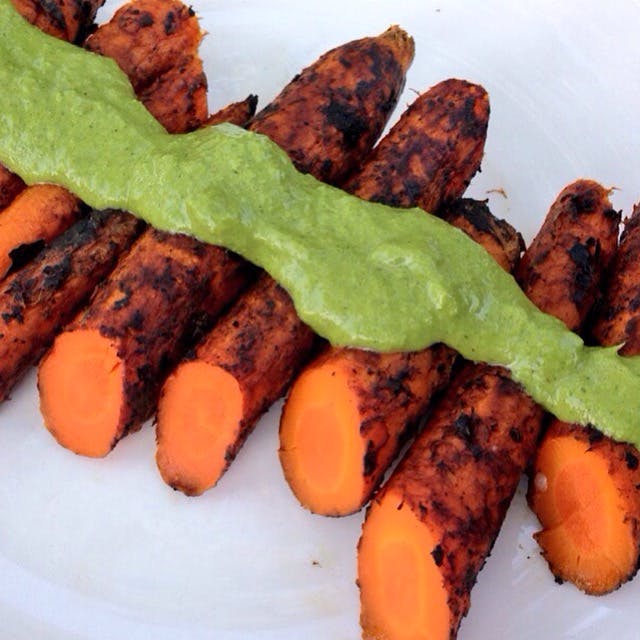 The carrots take about fifteen minutes in the fire. Keep turning them to get every surface black. They should look blistered when you take them off the fire and they’ll peel easier this way. I just rubbed most of the blackened surface off with my hands. Leaving a little on adds to the roasted flavor.

While I had the fire going, I wanted to try some other experiments. My friend Denny Culbert (see his Instagram post above) told me about roasting whole eggplants right in the fire. Corn was also on my mind after trying some incredible wood-roasted corn on the cob at Colitvare in Houston. They roast them in their wood-fired pizza oven, but I left the shucks on to let them stand up to the intense heat. Another wood-fired pizza oven, this one in Phoenix at Pizzeria Bianco, produced the most intensely flavored onions I’ve ever eaten on their Wiseguy pizza, so I added a couple onions into the mix too. 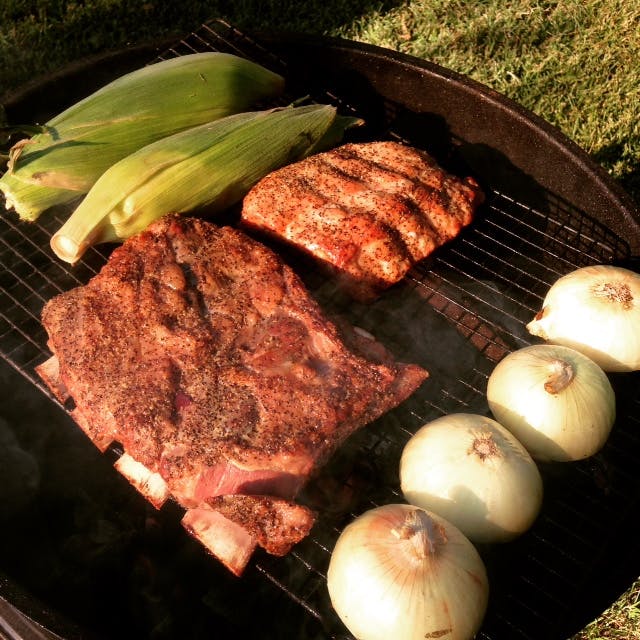 For the corn, I tried two methods. Two cobs went directly into the fire, shucks and all. The others went onto the grill next to a rack of beef ribs. I set up my grill the same way I did for the sixty-minute pork ribs. The low-oxygen environment is key in keeping the corn (and the ribs) from burning. After an unsuccessful go at the beach with onions directly in the fire, I halved a couple sweet onions and placed them cut side down onto the grill next to the ribs. Thirty minutes later the onions were roasted tender. I roughly diced them and ate them as a side. The sweetness was intensified and the flavor of smoke and fire was like nothing you’d get inside a foil wrapping.

The corn experiment had mixed results. The ears directly in the coals cooked in just thirty minutes, but the coals added some char onto the ears. That doesn’t seem like a big deal, but this char didn’t taste roasted. It tasted burnt. The ears over direct heat on the grill were infused with the flavor of the grill to a surprising level. I’m not sure if it was the animal fat dripping into the coals, or just cooking with charcoal, but the flesh of the corn tasted meaty. It took an hour to hit a good level of doneness, but it’ll be hard not to do corn this way every time. Especially if I already have the grilled fired up for a few racks of ribs. 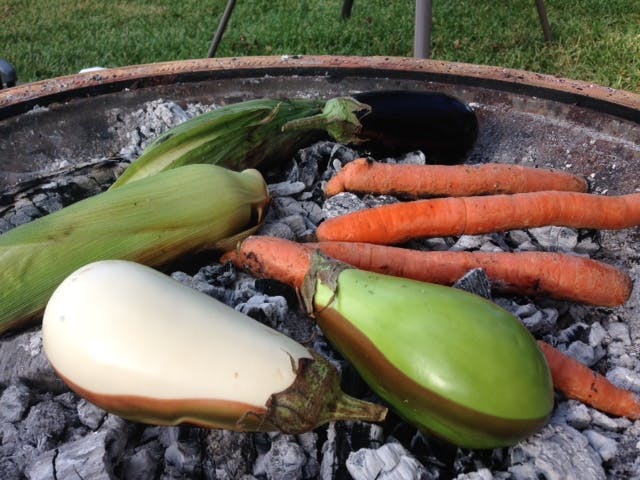 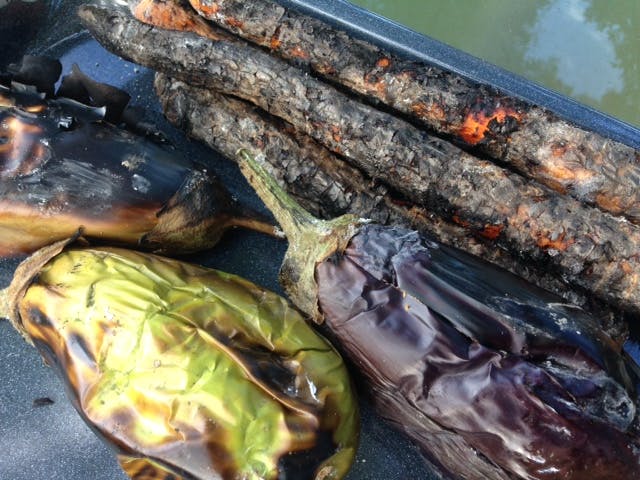 The eggplants might have been the easiest of the bunch. After about six or seven minutes on each side, they got soft and begin to release steam. Make sure to get all sides blackened so they’ll be easier to peel. Once cooled slightly, you just have to peel off the burnt skin, just like you would on a charred pepper. Rough chop them, add some salt, pepper, and olive oil and stir.

These are some good ways to give your sides some good barbecue flavor too. Instead of trying to whip up some potato salad or mac & cheese in the kitchen, you might as well use the fire you already have lit.