Established barbecue families are easy to romanticize, but Mike Smolik is a realist. He’s the latest to carry on the 88-year-old Smolik barbecue legacy, but he’s not letting family traditions dictate his every move. A big, new barbecue hall out along the interstate in Mathis was a bold step, and plenty has been changing in the smokehouse too.

Above all, Mike wants to serve great brisket, and for that he goes back to Smolik family traditions. Mike burns chunks of beef fat in the firebox of his smokers, a technique his grandfather William Henry Smolik used for his barbecue in Karnes City when he opened the City Market there in 1928. It’s a process Mike first witnessed when he started tending fires and stuffing the family’s famous Czech sausages at six- or seven-years old. 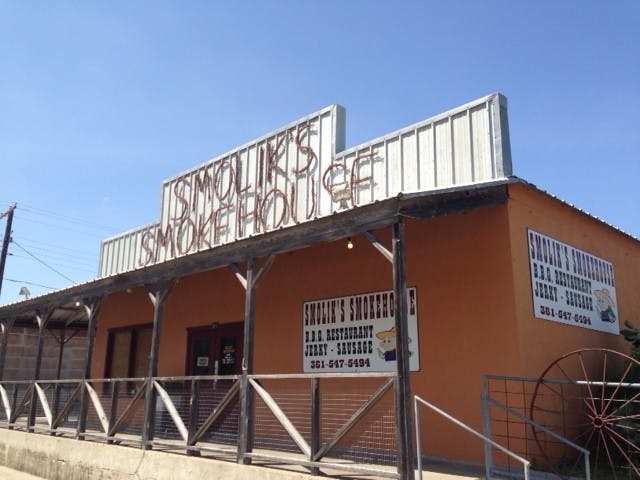 Mike went out on his own when he opened a location of Smolik’s Smokehouse in downtown Mathis in 1989. He began by cooking the only way he knew, directly over wood coals. As business grew, the method became incredibly labor intensive (it takes much more work to flip, mop, and move the meat around than feeding the fire of an offset smoker), and prohibitively expensive. The wood bill to create all those coals was immense, but Mike didn’t know any other way to cook. Then a pit builder from Corpus Christi traveled up to see him in the early nineties. He’d built the smoker for Joe Cotten’s in nearby Corpus Christi and offered to build one for Smolik’s. That was the last of the direct-heat cooking.

The new pit eventually led to a huge cabinet smoker for the sausage and a gas-fired rotisserie smoker for the rest. The cooking methods required less fuel and less attention, and Mike capitalized on the time he saved by adding more elements to the business. Before long, there was a bakery counter with fresh kolaches, jerky and smoked sausages sold at the meat counter, and a growing barbecue menu. But one constant was the homemade sausage. Despite all the other innovations, making the family recipe in house was never going to change. 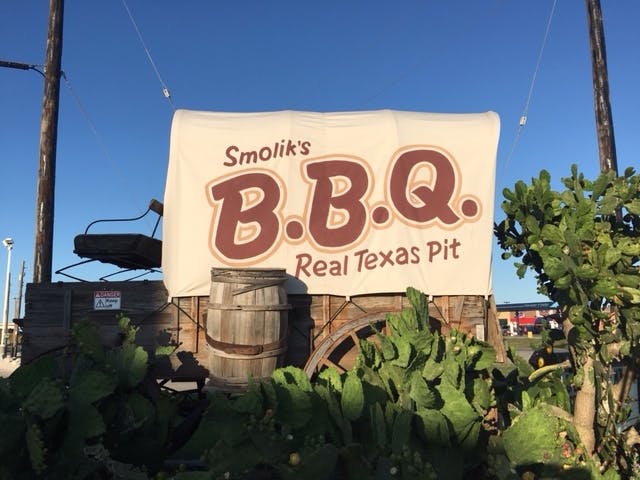 After visiting the downtown locations a couple of years ago, I wrote a review that wasn’t kind to the brisket at Smolik’s Smokehouse. I got an unexpected call a few days later from Mike, and he got right to the point: “What didn’t you like about the brisket?” I told him, then we talked a while about Czech sausages. It began as a tense conversation, but we laughed about it recently as he showed me around the new restaurant. He had been mad for sure, but it was mostly at himself. “I let it get away from me, and it ticked me off,” he confessed. With all the work required to keep the restaurant’s many operations going, he’d taken his eyes off the quality of the barbecue they were serving. His immediate mission was to right the ship.

Mike wanted to get back to his roots. He had no plans in scrapping his modern smokers, but he really wanted to capture the essence of the barbecue of his childhood. “I was trying to get that flavor of the charcoal,” he explained, but he couldn’t get it from the rotisserie smokers. So he threw a few hunks of beef fat into the firebox.

It sounds crazy, but the distinct flavor from direct heat cooking is the melted fat dripping down into the coals and vaporizing up into the meat. It’s a way of smoking the meat, but with fat smoke instead of wood smoke. Mike tweaked his process to add a bigger load of fat and put it on at night “to make sure it’s got that first good kick of the charbroiled flavor.” It worked. I tried a slice of the brisket, and before I knew anything about the process asked where he’d gotten the direct-heat charcoal flavor. He was really smoking with fat. Or more specifically, the brisket was being flavored by smoke from its own trimmings. 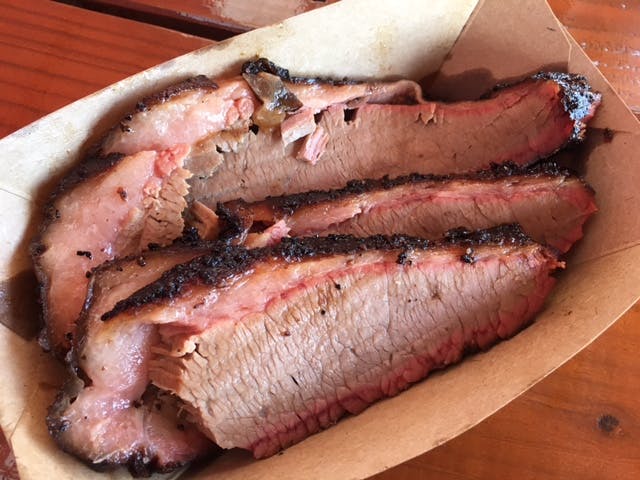 Opening the new location out by the highway put a temporary damper on his experiments back at the original downtown joint. But when he hired chef John Rodriguez to work the pits at the new place, he got back to tinkering. He bought Aaron Franklin’s book and studied the brisket chapter. He and Rodriguez took a trip to the TMBBQ Festival last year to taste brisket from many of the best pitmasters in the state, and the simplicity of the flavors was an eye-opener to them both. “What we found throughout all of them was very tender barbecue with mild smoke,” Mike said. The whole ride back to Mathis, they talked about the changes they’d make.

Unfortunately, but not unexpectedly, the new location has siphoned off quite a bit of business from the one downtown. Mike sees it as a blessing in disguise, because he thinks he’s finally got his brisket dialed in over the past couple months with his extra down time. But he and Rodriguez still aren’t done. “We’re still evolving, trying to get the perfect combination of taste, texture, and bark.” With great brisket now at two restaurants, they’re still way ahead of the game. They’ve also proven the old adage that fat is flavor.