Even if the 300 migrants first given land grants in Texas didn’t make it to Blanco, Old 300 BBQ is still a good lesson in Texas history. The Hill Country joint is dubbed in honor of those original settlers; their names adorn the walls and modified Texas battle flags are etched into the concrete floor (“Come and Eat it”). The restaurant’s name lets you know to expect classic Texas barbecue, and that’s exactly what they deliver. 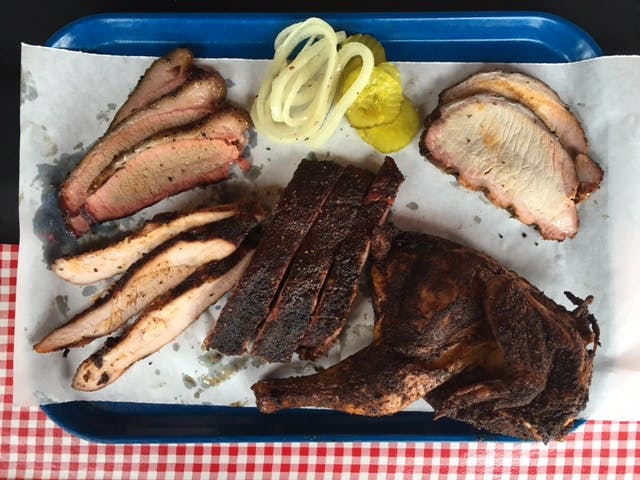 If you came for brisket, you’ll leave happy. It’s well-seasoned, tender, juicy, and smoky. The lean slices with a hefty fat cap were superb. It’s brisket worth traveling for, especially on weekends when you can get their Akaushi brisket, ($22.50 per pound vs. the normal $15.98 per pound) which I didn’t get to try.

The rest of the meats exhibited the same great seasoning from a healthy dusting of rub, and they all had a pleasant, mild smokiness. Unfortunately, they just didn’t hit the sweet spot of doneness. The turkey was a touch dry, while the overcooked pork loin was more than a touch. I got there just as they opened the doors, so a late hour wasn’t to blame.

The crispy skin on the chicken looked great, but it was hard to bite through without sliding off the meat. The meat was still plenty juicy with heavy seasoning making its way down into the bird. And if the ribs had been made in St. Louis style (without the tips), I’d have loved them, but the dried out tips turned me off. All nitpicking aside, it’s a platter of barbecue I’d be happy to repeat. Greatness is in their grasp with just a few tweaks, and most importantly, the brisket ain’t broke. 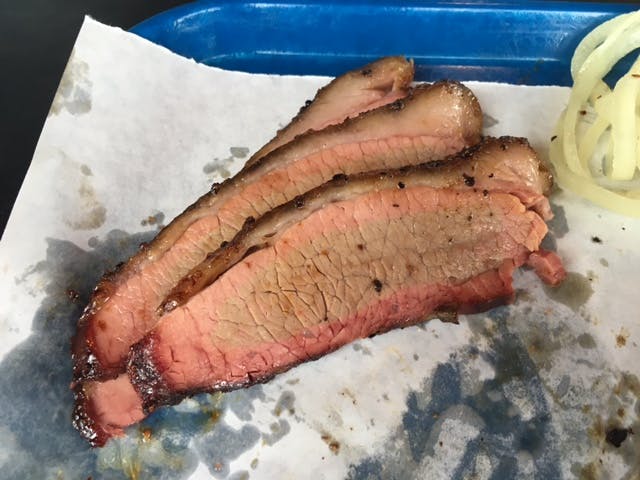 A sausage wrap makes for a cheap and satisfying snack or light lunch, and it’s usually the cheapest meat item on a menu. This one was $7, a price that includes two sausage wraps. I asked for just one as I reached for a few dollar bills. They refused. “An order comes with two,” was the simple reply. That makes as much sense as saying, “Sorry, an order of pie comes with two slices.”

I got them both anyway, of course, getting one wrap with the original sausage, and another with jalapeño. Both are from City Market in Schulenburg, and they came tucked into grocery store flour tortillas. I’d rather have white bread for Polish tacos, so I grabbed a couple of slices from a stack by the pickles and onions. Pro tip: If you want a proper sausage wrap here, just ask for a small link of sausage and pay by the pound. The pickles, onions, bread, and sauce are all free. 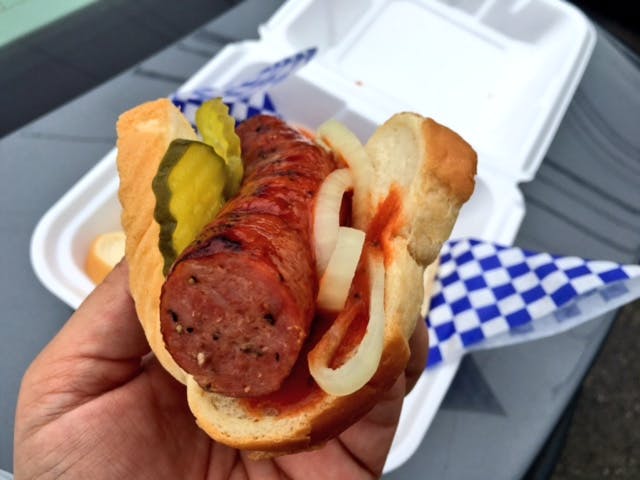 Cobbler and banana pudding are on the dessert menu, but for obvious reasons I was drawn to the smoked cheesecake, which is made by putting a whole cheesecake into the smoker for fifteen minutes or so. It’s rich with barely a hint of smoke, but I like the idea. The berry compote poured over top had me tempted to finish the generous slice. 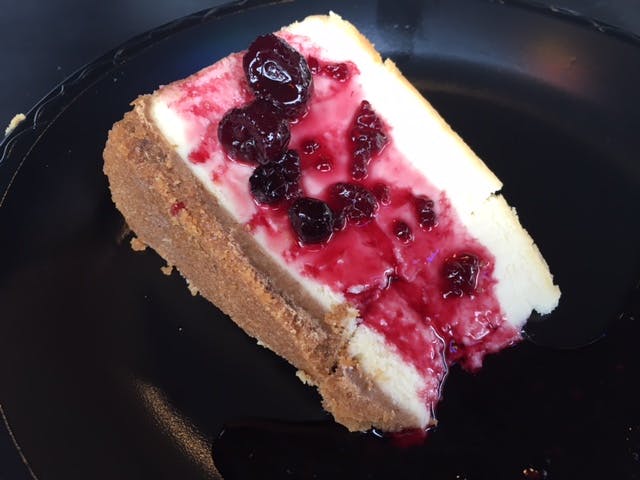 Blanco is about an hour north of San Antonio, making Old 300 BBQ the southern anchor of a good stretch of barbecue along Highway 281. You could make a great day of barbecue eating just on the short stretch from Burnet to Blanco, and I’d bet you a slice of smoked cheesecake that Old 300’s brisket would match up well against any of them.