The nice thing about making a BBQ trip with a lot of friends is that everyone will end up ordering something different, and with bartering you can eventually get a good taste of everything. This worked especially well for my latest trip to Opie’s Barbeque in Spicewood for the Labor Day Holiday. 6 of us rolled into the parking lot and instantly noticed that they finally got around into installing a sign above the building, thus making it much easier to find (this same trip a year ago had our car passing twice before spotting it, despite it being right on the highway). We briefly discussed among ourselves a game plan, and then started ordering a few meats each until we together had at least some of everything (as a cheap plug, wanted to mention that ordering all together also got us well above $50, and thanks to my Q card from Man Up BBQ’s discount program, I earned myself a free t-shirt). We also heard a rumor that Opie’s started pulled pork, and a colleague of mine from Georgia swears it is closest to the real thing he has found in Texas. Unfortunately this new treat is only for weekends, and this being a Monday we just missed out. 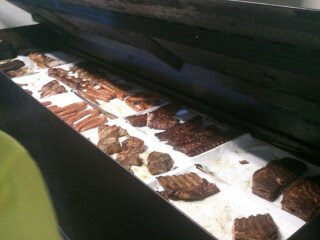 Once we got our brisket (both fatty and lean), regular sausage, jalapeño cheese sausage, pork loin, whole pork chop, pork ribs, half a rack of sweet and spicy ribs, and ½ a chicken we were ready to begin. Actually we weren’t quite ready yet, because as anyone who has been to Opie’s before knows, they are one of the few places that has side dishes that just can’t be passed up. That is why each person accompanied their order with a side of Tater Tot casserole, and we added single side of spicy corn to round it out. Corn was heavy on the spice and strong on the liquid. Corn tasted fresh, and the heat hit so bad that some of the females in our group could only manage a few bites, but I enjoyed the full flavor. Tater Tot casserole was everything that is right in over the top side dishes. Cheese and tater tots make up 80% of this dish, and it melts in your mouth with still leaving super crispy potatoes that crunch along with the greasy gooey cheese. It is too good to pass up. They also offer free beans, giant containers of sauce, and bread on the table in the dining room. Beans showed off a good peppery flavor, although they had a bit too much water soaked up in them. Sauce was a tad thin and too much vinegar, but great pepper flavor with a touch of smokiness to it.

What we come for however was the meats, and they ranged from a bit dry and over cooked to near perfect. Both pork cuts, the loin and chop, were a bit tough and dry. This was upsetting because every previous visit had shown us a perfectly moist, tender, and super flavorful pork chop that could be ripped with finger and got you hands dirty with the juices and spices. The strong pepper flavor still tasted good on the outside, but it still took too much tearing of the teeth. Lean brisket had similar issues. No fat in it dried it out too much. The smoke and pepper rub flavor were there, but was so tough a knife was required. Everything up went way up from that point. Fatty brisket fell apart when picked up and the rendered fat melted away with each bit. Smoke ring was a bit faded and it showed in only a light smoke flavor. 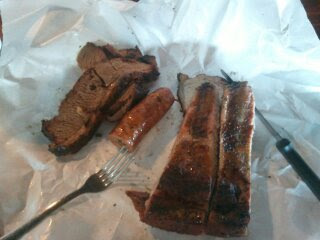 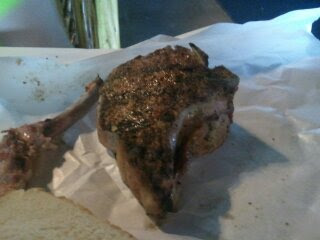 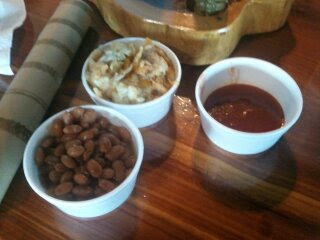 Regular sausage was densely packed and juicy, but a bit too typical. The smoke was a bit light in the regular version but salt, pepper, and a distinct sweetness came on nicely. Jalapeño version had the kick we all were craving which left a small burn in the mouth. This was quickly cooled however when the cheese that was cooked inside oozed out of the moist sausage. This was one of my favorites as it didn’t taste of over processed sausage that the regular had, and the spices were dead on. The half chicken must have been taken from a monster bird, because it was a huge serving. The dark meat was much better than the white, having much more flavor and tenderness. Rub on this was smooth and subtle, a perfect complement to the light chicken. This brings me to the two heroes of the group, pork ribs and baby back ribs. Pork rib was meaty and large. A nice tug brought the meat falling of the bone but the rendered fattiness still held it together. The strong pepper rub kept the smoke in and left every bite a similar smokiness with a strong hint of sweet pink rib meat. Baby back had a sweet and spicy glaze, and these locked in the moisture and tenderness perfectly. Sweet and spicy is exactly how to describe the flavors, and they worked well together to bring a bit of heat but cool it down. This combined with the tender sweet meat and the hot smoky flavor made these a big highlight.