If it’s been a long day of poor-quality smoked meat, then I start ordering dessert. If the meat is bad, then the sweet stuff is usually pretty good. I watched the knife man cut the brisket and it looked tough and springy, so I added a slice of chocolate cake to the order. 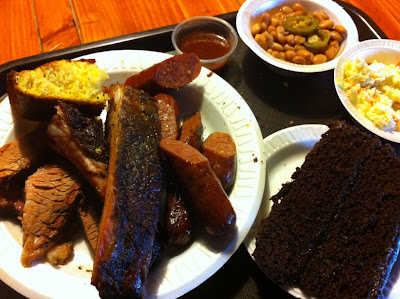 Beans were unseasoned and the slaw was a wet mess. A hot link was little more than a spicy hot dog. Brisket had a nice looking crust, but the meat had no flavor outside of the crust, and it was dry to boot. The ribs also had a nice bark, but the only flavor was salt. They had no smoke and were also tough. At least we had the chocolate cake, but one bite into the dry cake and I knew it came from a nearby grocery store. They couldn’t even redeem themselves with the dessert.