When I first saw a pastrami beef rib on the menu at The Granary in San Antonio, my heart nearly skipped a beat (no blood pressure jokes, please). It was late 2012, and I’d never seen such a thing. Six months later, after I was named the Barbecue Editor, it was one of the first things I ate as part of my new job duties. The verdict? I wanted to love it, but it was too salty. That would get corrected with time, but it began an obsession to find the perfect pastrami beef rib.

As I began searching for them, it became evident that beef ribs aren’t a popular cut for pastrami. It was hard to find even one version elsewhere. I was a little late on the one at Hatfield’s in Los Angeles, which closed in 2014 (the Hatfields now run Odys + Penelope in L.A. which features a Texas-style smoked short rib, but alas no pastrami). Then a 2014 review lauding the pastrami beef rib at Abe Fisher in Philadelphia had me booking a train ticket. It was worth it. 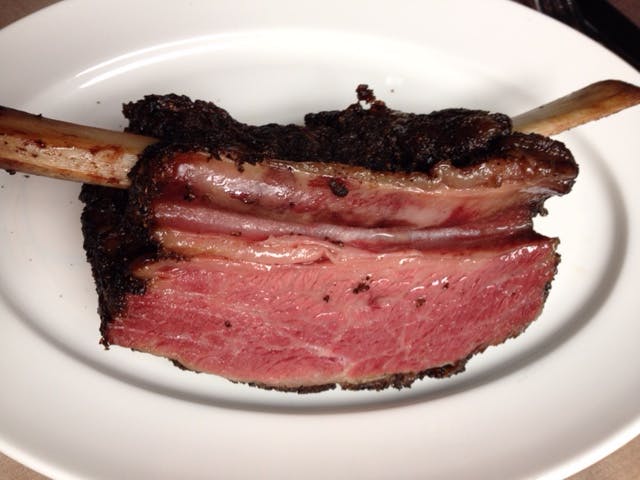 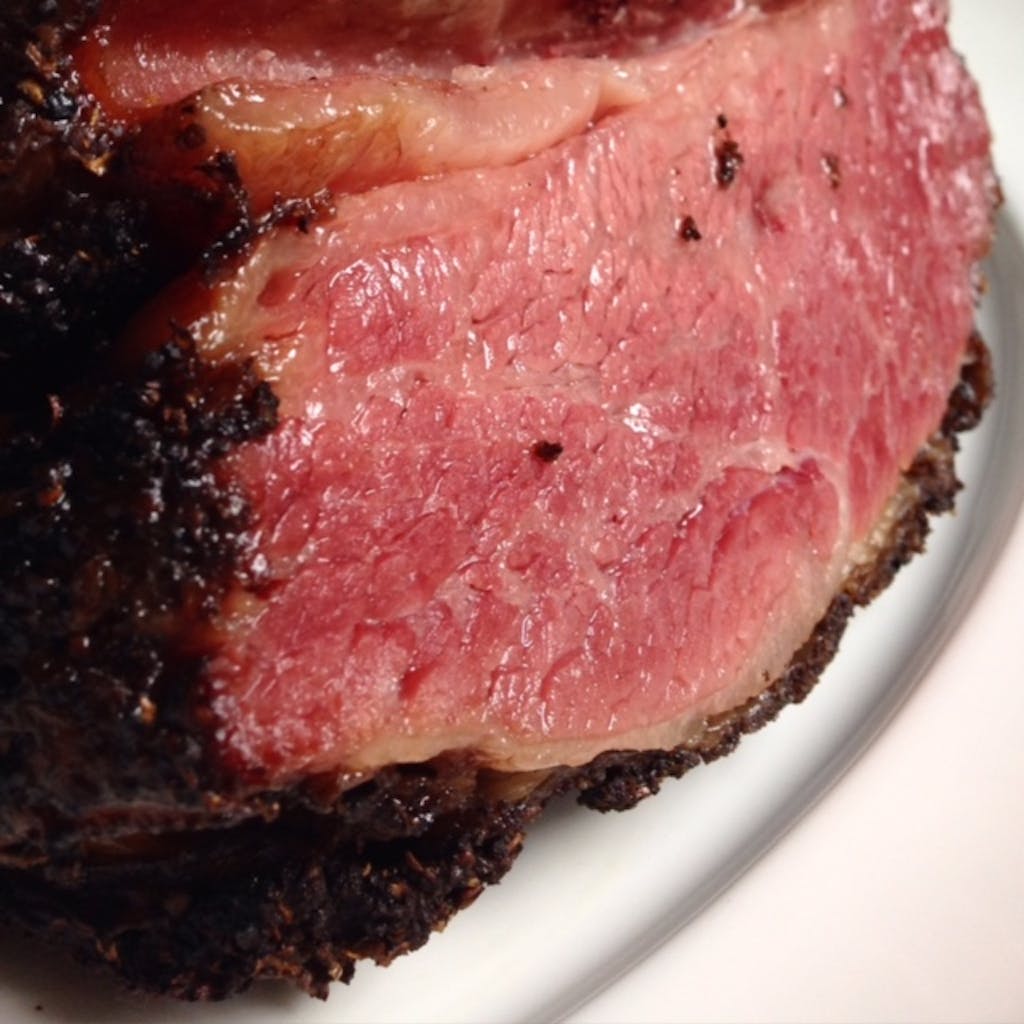 Abe Fisher is an Israeli (but not exactly Kosher) restaurant owned by restaurant titans Michael Solomonov and Steve Cook. The 24 racks of pastrami beef ribs they smoke every week are so popular they have to be reserved before you even walk in the door. Chef Yehuda Sichel uses a dry curing method inspired by Schwartz’s in Montreal, Quebec. That’s why these ribs are really called “Montreal Smoked Shortribs” on the menu, but they sure eat like pastrami.

Chef Yehuda fell into the use of short ribs by necessity a few years back. He was in the midst of a short stint at Citron & Rose when he ran out of brisket pastrami. “There was some raw short rib in the walk-in,” so he put it in the pastrami brine. It worked, and it’s now one of Abe Fisher’s most popular menu items. They also experimented with other cuts like beef cheek, but stuck with the beef rib “because it’s just so much better than brisket,” Sichel told me. He’s right. The consistent thickness and even marbling of a beef short rib make it perfect for pastrami, and Abe Fisher’s version  is stunning. I wanted more.

I headed back to The Granary where chef Tim Rattray and sous chef Matt Coogin have now honed the pastrami beef rib recipe into one of my most spectacular bites of barbecue last year. When I told him about the saltiness I encountered early on, he admits that they “changed the method up a bit.” They use chuck short ribs, which make for a more manageable rib than the plate version. About ten racks per week (they’re served on Tuesday only) are cured for three days and smoked. There is no steaming step to tenderize these ribs, but they are wrapped in butcher paper toward the end of the cook. 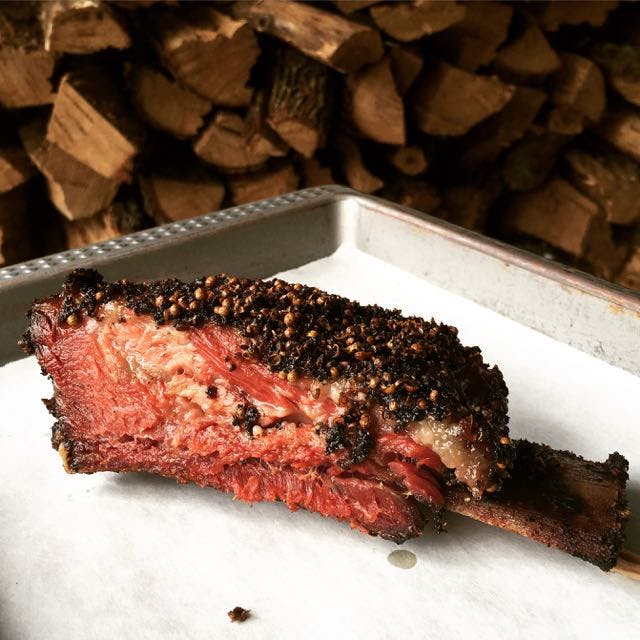 The meat pulls away from the bone better than most short ribs I’ve eaten. An audible crunch comes from the roughly cracked black pepper and coriander in the rub. It plays against the buttery soft fat running through the rib and provides a punch of flavor without being as overwhelming as the thick layer suggests. It might just be the ideal pastrami beef rib.

It’s hard to pinpoint the origin of the pastrami beef rib. Chef Yehuda at Abe Fisher said he’d never tried one until he made a version in 2013. Rattray’s first rack came out of the smoker just a few months prior. In 2011, a stunning photo of beef cheek pastrami was published in Modernist Cuisine along with just a passing reference to beef short rib pastrami (although barbecue guru Steven Raichlen wrote about eating them at the Modernist Cuisine lab in 2012). Heck, maybe everyone was just copying Hatfield’s, or it could have been this 2009 post from the master Michael Ruhlman that was the modern inspiration. Either way, it’s now making an impression from Philly to OKC—and especially in Texas.

Two weeks ago I was able to try a monster pastrami short rib from Cattleack Barbecue in Dallas. Owner and pitmaster Todd David was inspired by the images he saw from The Granary and added some short ribs to his brining containers already stuffed with beef briskets and bellies. The result was dang near flawless, which is remarkable given it was their first try. Like the Granary, they’re smoked through without any steaming or roasting in the oven. That gives them plenty of smokiness that is well balanced with the peppery rub. They didn’t have quite the exemplary pull-apart tenderness, but David nailed the flavor without getting it too salty. I can’t wait for his next batch. 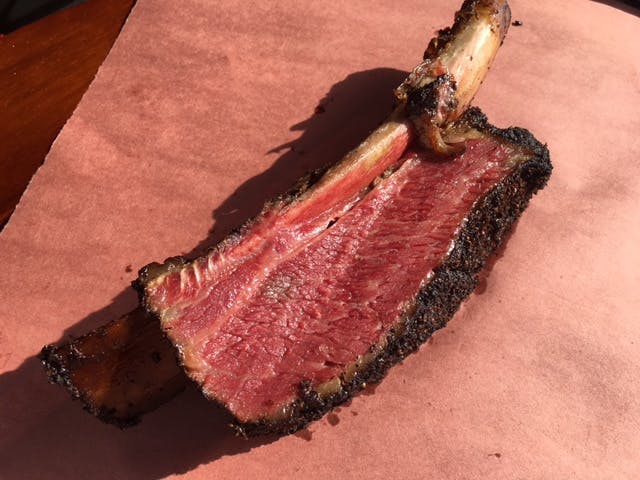 I’m anxious to see who else might embrace the pastrami beef rib. I figured a New Yorker would be jumping at the chance, but Brooklyn’s most famous beef rib cook said not to expect them on the menu anytime soon. Billy Durney of Hometown Bar-B-Que has been known to make small batches, because, as he puts it, “It’s my favorite thing I’ve ever eaten in my life.” He just knows he’d have to charge way too much for them if they were on the menu, and besides “We’re battling for pit space as it is,” he tells me. So that puts me on the lookout for Texas pitmasters with a little space in their smokers, and a desire to wow their customers with an imposing beef rib of a different color.