Underdressed in my standard attire of jeans and a barbecue t-shirt, I dropped my car with the (mandatory/complimentary) valet at the new Dallas Design District restaurant, Wheelhouse, and found a seat on the breezy patio. A sculpture of a man who didn’t quite make it through a wall—think Han Solo in carbonite, but in reverse and in gleaming white—separates the patio from Oak Lawn Avenue, blocking a bit of the noise for the smartly dressed professionals sipping $10 cocktails. It’s a nice place, and an unlikely spot to find ribs or pastrami. Yet there they were on the menu, combined into one dish—pastrami pork ribs.

Pastrami ribs are nothing new in Texas, but the barbecue joints that have embraced them tend to go the beef rib route. At Wheelhouse, they opted for St. Louis cut pork ribs. Chef Christian Lehrmann was smart to assume that everybody likes ribs, but when developing the menu he wondered, “How do we make them stand out?” That starts with the brine where he adds sorghum syrup and Szechuan peppercorns to the standard salt and water mixture. There’s also some mustard seeds, black pepper, and coriander to give it that signature pastrami flavor. All of those spices then go into the rub.

The spices are coarsely ground for the rub, which goes on just before the ribs are placed into an electric cabinet smoker. Once smoked, the rack of ribs are separated into thirds and chilled. To heat for service, each four-bone portion is dropped into the deep fryer to reheat. The fryer gets the coarse rub ingredients crisp while keeping the meat juicy. It’s a great way to reheat (some) barbecue that I hadn’t really considered before. 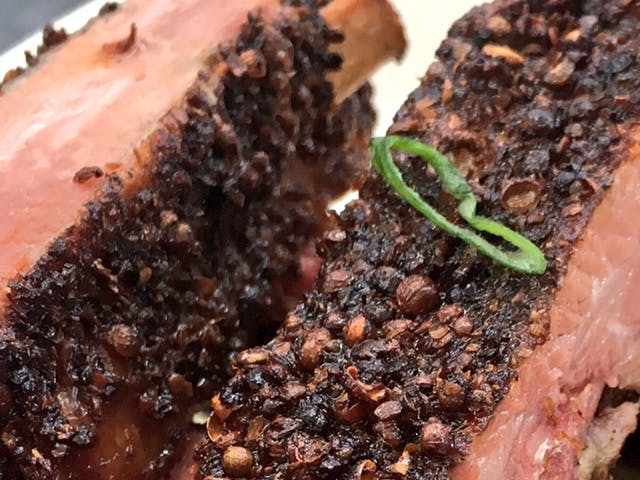 There’s a nice crunch on the outside of the ribs, but they’re perfectly tender. Four are served to an order, stacked atop a pool of sweet and spicy mustard and a side of kimchi slaw. I didn’t realize how much I liked mustard and pork ribs until I tried them, and the kimchi slaw was a nice departure from a mayo-based version. I asked Lehrmann where the inspiration came from to pair these flavors. “We like food that goes well with beer,” he told me. If I had my choice, I’d pair them with a link of Wheelhouse’s smoked kielbasa, but a beer will do too.