Robert Payne has worked as a butcher in the past, and more recently for the Butter Krust bread bakery. His wife, Penny, was also in food service at a local school cafeteria. Three years ago, they both decided to retire and open up a barbecue joint in Burnet. They chose a building on the west side of town that has seen number of barbecue joints come and go. One of those was Burnet County Barbeque which in 2003 was named one of Texas Monthly’s Top 50 BBQ joints.

Now, the Payne’s are looking to revive the barbecue glory once housed here, and they’re off to a good start. I stopped in not knowing what to expect, so I ordered sparingly. Brisket and ribs were my only request. Robert was slicing and asked immediately “lean or moist” as he pulled a jet-black brisket from a steam table tray. He had just scraped the last few scraps from the previous brisket off the cutting board, so I got the first few slices from a fresh one. The knife glided throughout the meat, and each slice was more promising. The ribs looked nearly as good. Sides were self-service, so I took only a small serving of potato salad and slaw.

Out on the trunk of my car I took the first superb bite of brisket. It was smoky, peppery, and a little bit sweet. The outside slice had a pleasant crunch to the crust, while the meat beneath was moist and tender. This was brisket worth seeking out. The ribs were nearly as good. The meat came easily off the bone, the bark held plenty of smokiness, but they could have eased up a bit on the salt.

The first taste was impressive enough that I had to go right back in and try more of the menu. Robert laughed at how quickly I had come back for seconds, and told me that he learned to make sausage while he worked at the butcher shop. I ordered up a couple links. He also added some smoked pork steak, and I was ready for the second course.

I like my sausage links juicy, so I thought this relatively dry sausage could have used a bit more fat in the mix. It was nice to see the coarse grind and the smoke flavor and seasoning were both bold. The pork steaks could have really used some of that extra oomph. Smoked pork steak is a cut I generally like, but this one had an unwelcome chewy texture. Despite that thick smoke ring and blanket of rub, there wasn’t much flavor either.

A few years back I took a long trip down Highway 281 from Hico to Blanco, and there wasn’t any great barbecue to crow about along the route, Burnet included. Today, between Payne’s Bar-B-Q Shak and Post Mountain BBQ (review forthcoming), Burnet is a new barbecue destination. Whether you arrive via Highway 281 or Highway 29, it’s now worth making a barbecue stop in Burnet. 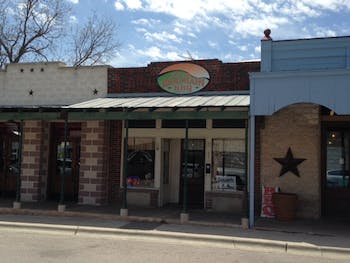 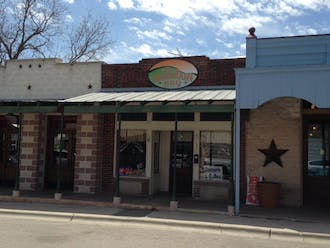