After a nearly two-month hiatus (that felt like years to some barbecue fanatics) Pecan Lodge is back up and running. Justin and Diane Fourton have a wide menu of Southern food favorites so they weren’t exactly closed, but there’s no doubt that a celebration was warranted. A banner exclaiming “BBQ is Back” was hoisted over the counter, and two new items were chalked up on the menu. While I was there to try the new homemade sausage and pulled pork, it was nice to have some Deep Eddy sweet tea vodka to sip on while in line. 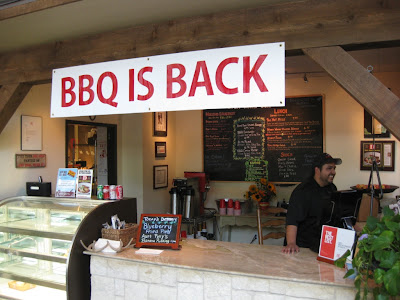 With SideDish proclaiming this the best fried chicken in Dallas, I had to add a leg and thigh to my barbecue order of a pulled pork sandwich and a homemade sausage link. A soft white bun held nothing but large chunks of moist pulled pork. This is Texas barbecue, so they ditched the slaw and the sauce. A small cup of spiced vinegar was there if you needed an extra zing. The smoky meat, covered in a deep dark crust doesn’t need anything extra, but the sauce was certainly complementary. For the links, the Fourtons decided that only a homemade pork sausage would do. The links were deeply smoky with a great snap and pleasing spice level. With such a large crowd that included the Texas BBQ Posse, I’m sure the owners were nervous about how their new menu items would be received, but I’d say don’t change a thing. 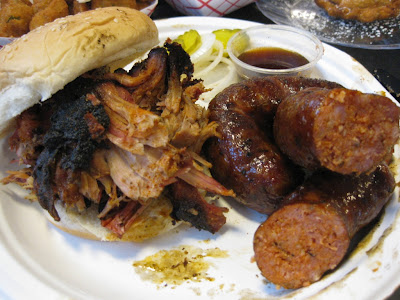 I didn’t have many doubts, but the new barbecue items were worth the wait. It wasn’t just the barbecue that made this one of my more memorable meals I’ve had anywhere in quite some time. The mac & cheese has that extra kick from the jalapeno and bacon, the okra was crispy from the cornmeal crust, and the blueberry fried pie was hot, crisp and not weighed down with grease. Now I’ll just have a tougher time deciding what to order on my next visit.