You may have heard that this joint is getting a bit popular. While I may lament not being able to visit my go-to barbecue joint without braving a long line, I’m happy for the proprietors. Justin and Diane Fourton are friends in the barbecue world, and I’ve sought some bit of smoking advice from Justin on what were once biweekly visits. During those many visits I watched their menu evolve and sampled just about every special they ever offered. There isn’t much that Justin can’t successfully transform under a bath of mesquite smoke.

Wagyu brisket (pictured above, on the left, with regular brisket on the right) is an indulgence at $25 per pound, but it must be ordered if it’s on the menu. My preference is to splurge for slices from the lean side where the intense marbling of the wagyu beef creates a difference from the standard cut that is more evident than on the fatty side. The buttery slices melt and fat envelops your tongue as chewing commences. The bold smokiness takes the meat to another level. There are few briskets in the state that can touch it.

Some specials will take a while to make it back on the menu until the crazy rush they’re currently experiencing dies down. A few months back I was lucky enough to make it on a day when the smoked pork belly (pictured above) was the special. A thick rub of black pepper played nicely with the smokiness. The considerable amount of fat had been smoked to a level of silky tenderness while the meatier portions had great pork flavor. These thick slices were hard to put down until my tablemates reminded me that we were sharing. 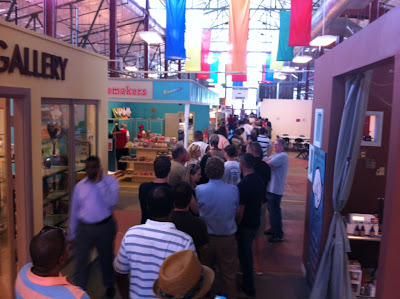 2012: After many meals, I knew Pecan Lodge was up for a re-review. They’d provided the most consistently great brisket in Dallas over more than a dozen visits, but I wanted to see how the Fourtons handled real pressure. Two months ago they appeared on Diners, Drive-Ins and Dives with Guy Fieri. The following week, the Fieri factor was already working. Lines that before had never exceeded about twenty people on the busiest of days was now stretching all the way across Shed #2 in the Farmers Market. To meet demand, they have started smoking double what they had done previously. Would the quality suffer? For this visit I needed a buddy who would keep me company in line (it would be eighty minutes on this Saturday) and order for me at the front. I wanted a standard plate of meat, so Scott Slagle was happy to be my proxy. After he retrieved our order from Justin (the now famous pitmaster still doles out the orders up front), we retired to a back table. The pile of meat in front of us caused a few onlookers. Fatty brisket was my first stop, and the meat didn’t disappoint. The tenderness was perfect as was the heavy smoke. They’ve always used a heavily salty seasoning, and today was no different. I was loving those tender fatty slices, but it was an end cut from the lean end that put me over the moon. A layer of nicely rendered fat cap was black with smoke. Juice oozed from the meat, and the first bite was brisket perfection. Justin hadn’t missed a step. In fact, he had improved. The best ribs I’ve had at Pecan Lodge were served to me on this day. Instead of a thick coating of sauce, it was a more restrained glaze that had cooked on nicely to the glistening bark. The meat came easily from the bone, and it was both hot and moist with rendered fat. These were excellent ribs. 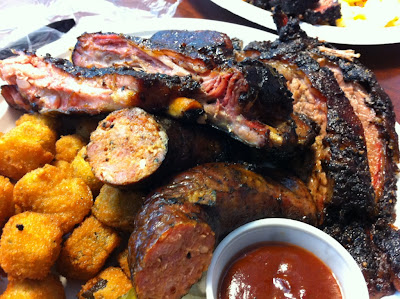 The only quibble I had with the entire exceptional meal was that the pulled pork received a heavy-handed post-applied rub which created some overly salty meat, but the pork sausage quickly made me forget. These house-made links were taut, juicy, well spiced, and satisfyingly smoky. Even after tripling the amount required, every link is still stuffed by the Fourtons and their staff. They just had to buy a bigger stuffer.

Even with the added pressure of living up to their television fame, and the sometimes suicidal move of doubling output without upgrading smoking equipment, Pecan Lodge is still matching the consistency of the meat they were putting out before all the hype. Just like at Franklin Barbecue in Austin, I can confidently tell people that Justin will deliver meat that’s worth the wait.

(This review was originally published on Full Custom Gospel BBQ.)