In the second season of 24 Hour Restaurant Battle,* it was a battle between fajitas and barbecue. A Texas barbecue couple, Michael and Katie Hunt, were in contention for an investment to open their concept if they impressed the judges. When Katie served a plate of smoked sausage to head judge Scott Conant, a Connecticut native, he bristled at the pickles and raw onions on the plate. “She said that this is a traditional garnish,” adding, “I’ve never seen this before.” Floridian Tim Gannon, co-founder of Outback Steakhouse and creator of the Bloomin’ Onion agreed. “There’s nothing worse than a raw onion.”

We Texans disagree. Raw onions, dill pickles, and cheap white bread are as common in Texas barbecue joints as barbecue novices are in Florida. Conant must have never stepped foot into a barbecue joint in Texas before his comment because those onions come standard with barbecue plates in these parts. So do the pickles and white bread. It’s a trio that we love in Texas, and we expect it for free (except at Smitty’s in Lockhart where they’ll weigh your pickles and charge you by the pound. Seriously.). But where did the tradition come from? 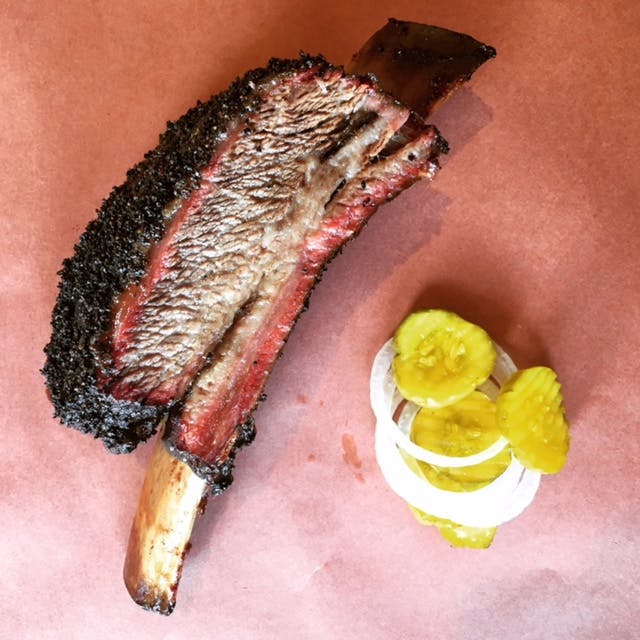 The common assumption is that this tradition started when pickles and onions became the de facto side for barbecue in the old meat markets. Barbecue was a side business for butchers, and they weren’t much for whipping up a batch of slaw. With their hot barbecue, customers ate what they could easily buy off of the shelves of the store. That would include raw onions, avocados, tomatoes, jarred pickles, and hot sauce. This 1917 ad from the Magnolia Grocery, which served “hot barbecue daily” in Fort Worth, is a good example of the inventory of a market at that time. If you can read it, you’ll see among the canned vegetables and dried pasta that the only things you could eat off the shelf are oranges, onions, and a variety of pickles. 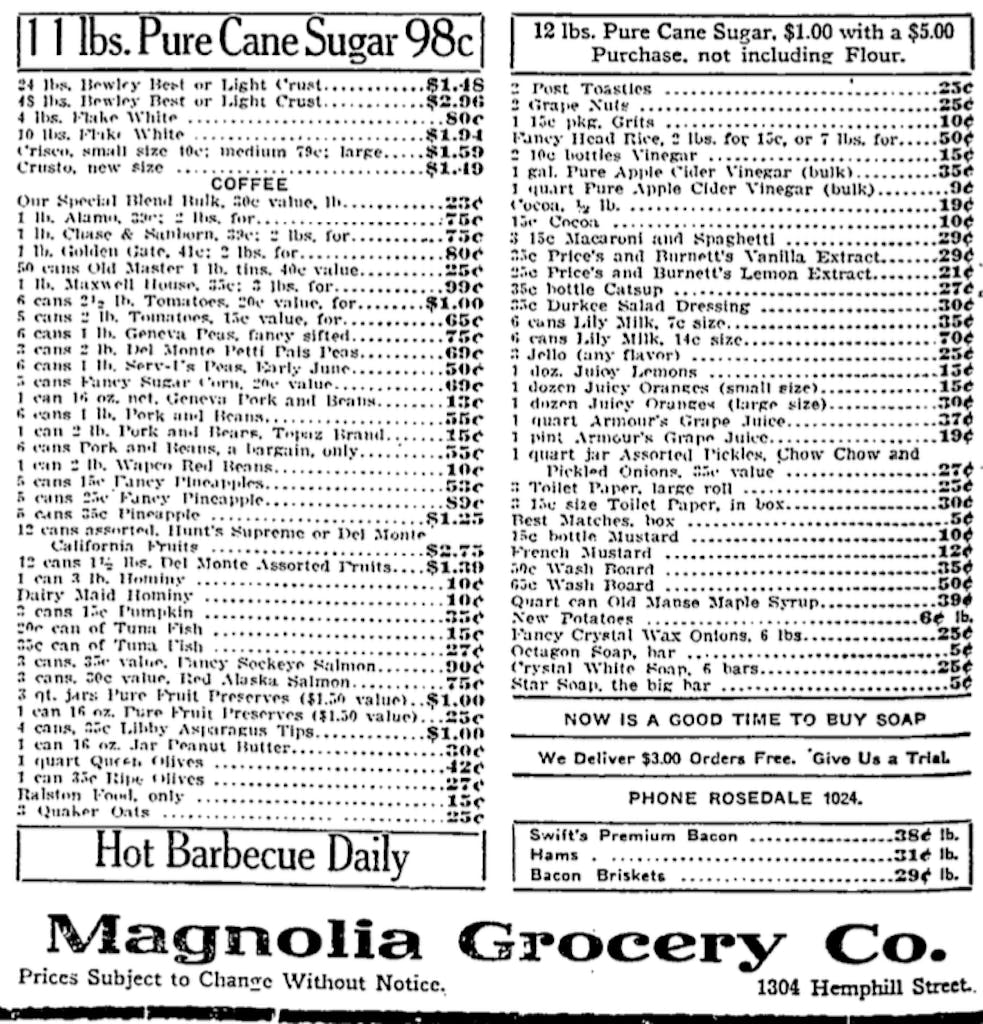 That certainly explains why those simple yet timeless garnishes would have been popular in those days, but is that really where the tradition started? After a bit of digging, it seems pickles and onions were already quite popular in the non-retail realm of public barbecues. In 1899, the Fort Worth Morning Register described the barbecue at the sheriff’s convention held at the stockyards. “There was an abundance of chickens, mutton, veal, yearlings and ham,” along with “Tomatoes on ice, pickles, bread and butter, coffee, and onions.” It was a similar scene in 1911 as reported by the San Antonio Express: “6000 pounds of meat, 3000 loaves of bread, one barrel and a half of onions, three barrels of pickles, twenty bushels of Saratoga chips, one barrel of radishes.” Saratoga chips are just potato chips, which were on trend in the early twentieth century. Radishes are a unique choice (I might have to try that), but there again are the pickles, onions, and bread.

Even further back was an 1895 article entitled Al Fresco in Frank Leslie’s Popular Monthly. Martha McCulloch-Williams was a writer and an early barbecue enthusiast. “[M]an might certainly make something jollier, more full of frolic savor, than a barbecue, but certainly, up to date, man never has done it.” That’s how she began the description of a barbecue held in “Boiling Spring,” which may have been in her native North Carolina or adopted home of Tennessee. Even outside of Texas, there were those onions and pickles. “From end to end there are piles of bread…There are pickles besides and platefuls of fresh cucumbers mixed with sliced onions.” The entire account is worth reading, if only for her description of the outhouse situation at a nineteenth century southern barbecue. 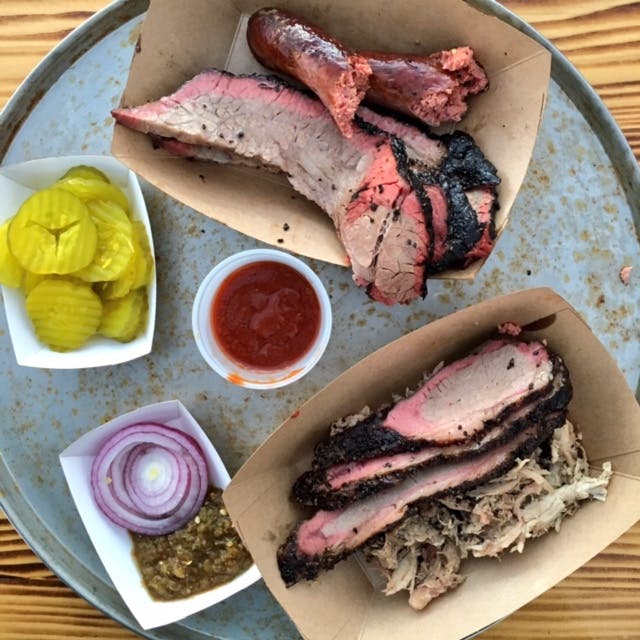 More accounts of public barbecues in Texas note the inclusion of pickles, onions, and bread, like the ones in Plano and Abilene in 1916. There’s also one in 1918 where “the next thing of importance was the best barbecue imaginable, with plenty of sauce, pickles, onions and bread,” as described by the Temple Daily Telegram. I guess what barbecue joint owners nowadays would like to know is why everyone expects them to be free.

“As my father says, ‘It’s not free, it’s included in the price,’” Keith Schmidt of Kreuz Market in Lockhart told me. Still, all those pickles, onions, and white bread cost plenty. And don’t forget the saltines. At Kreuz they offer either bread or crackers, and it costs $900 per week to carb up their customers.

I talked to a number of other barbecue joint owners in Texas to see what free garnishes cost them every week. Joseph’s Riverport Bar-B-Cue spends $300 per week, and here’s the breakdown on a few others:

Franklin even sent me a breakdown of how much they spend per hour of operation on these items (above). That’s a lot of bread, and a few 5 gallon buckets of pickles every day. What kind of pickles, I’m not sure. Franklin is mum on his choice saying he’s afraid of pickle shigging, but everyone else I talked to used Best Maid, from Fort Worth. That’s likely the flavor of pickles you know and love, but there have been plenty of joints who are now making their own pickles. Micklethwait Craft Meats in Austin, The Slow Bone in Dallas, and Flores Barbecue in Whitney have some of my favorite. 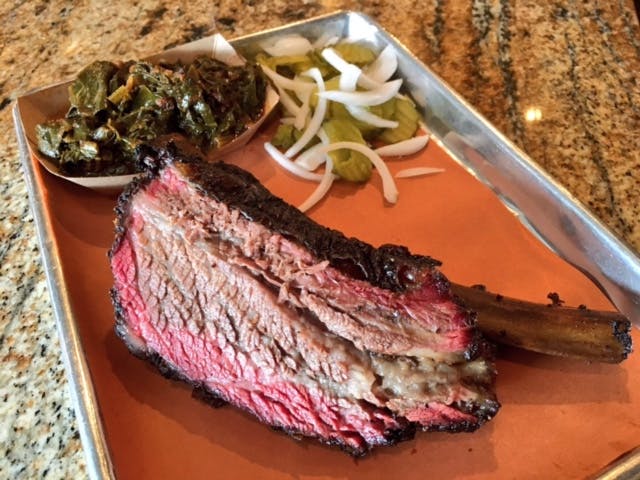 Artisanal or not, dill pickles are the perfect foil for fatty smoked beef. When I had a discussion with a pitmaster about how many beef ribs I could eat, I wasn’t sure if I’d ever really finished one by myself. I went to Pecan Lodge the next day and got a whole beef rib. Alternating a bite of beef and bite of pickle, it was gone before I knew it, and I still had room for greens. Pickles might be more than a garnish after all. Pickles might just be medicine.

The trio of pickles, onions, and bread can also turn a lonely sausage link into a meal. There’s nothing like a sausage wrap when you’re eating on a budget, and 3/4 of it is free. Pickles and onions also give a chopped beef sandwich some crunch and zing, and they improve any barbecue photo that may otherwise be awash in beige. 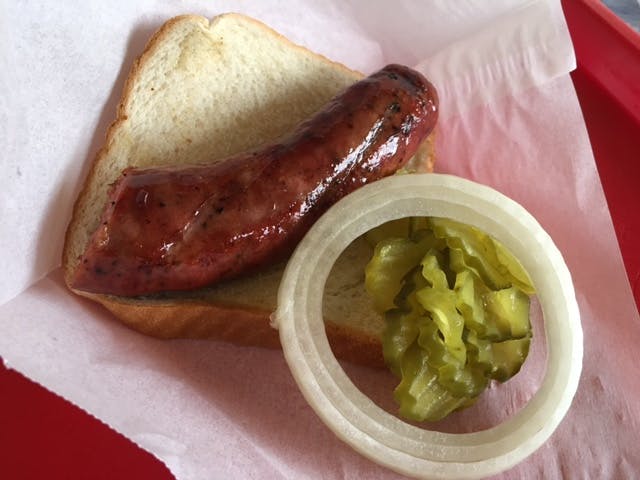 All those pickles, onions, and white bread might be free for the customer, but go easy on them if you can. As Texas BBQ Treasure Hunt previously noted, “if you don’t eat them or grab more than you really need, that is money thrown into the trash.” So, if you don’t like white bread or onions, tell your meat cutter not to bother including them. Go easy on the pickles too, unless you’re going to eat them. And if you’ve got a couple beef ribs on your tray, then I’d suggest to load up on those pickles because you’re going to need their magical powers.