Houston has an embarrassment of riches when it comes to barbecue. The new barbecue joints keep coming, and they continue to impress. The latest is from 27-year-old Grant Pinkerton, who had a line wrapped out of his door and down to the end of the building in the Heights when he held a soft opening of Pinkerton’s Barbecue on December 3. Thankfully for those seeking a barbecue lunch, things have died down a bit since then.

I was fifteenth in line at 11:30 in the morning on a Thursday. An empty bar (it’s staffed in the evening), and a menu written on butcher paper greets customers. The $20 per pound price for the brisket is what we’ve come to expect for these new school joints smoking prime beef. Pinkerton gets his from Swift’s 1855 line, as well as the beef ribs — which cost me $29 to get a taste of. The pepper-crusted beef was pull apart tender and lusciously fatty. An exemplary beef rib, but not unlike many other beef ribs around the state. 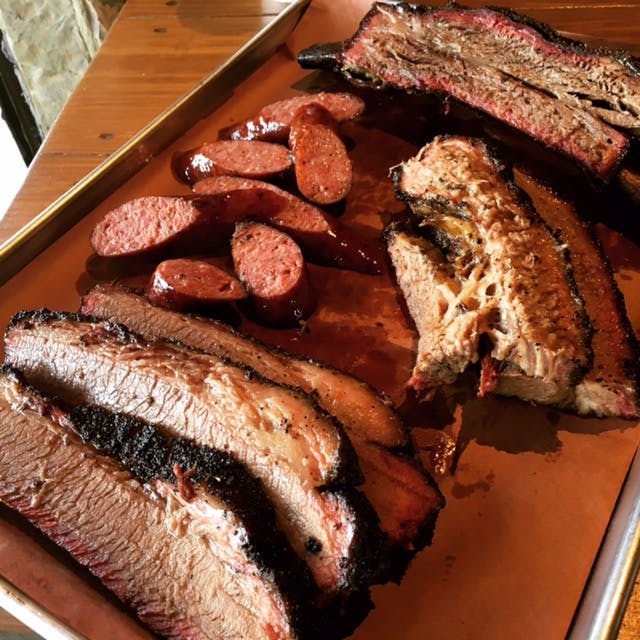 After requesting three slices of lean, I ended up with an entire pound of brisket—needless to say, they are thick slices. But had it been any thinner, the tender meat might have fell apart. Still, there’s no denying how great it tasted. The well rendered fat had a buttery flavor, and brought with it notes of black pepper and wood smoke as it melted on the tongue. Pinkerton starts his briskets on mesquite, then switches to post oak to finish the cook. From what I tasted, it’s a good mix.

Pinkerton shows some of his own unique style on the pork ribs. The rub is sweet, and tasted a bit like Old Bay seasoning. Pinkerton said the proprietary rub contains ground, dehydrated vegetables, and it goes on heavy. The ribs are available glazed or unglazed, both of which I enjoyed, but the regular ribs are sweet enough without the glaze. I expected them to come from some small supplier, but they’re Hormel. Meaty and fatty, these St. Louis-cut ribs kissed with oak smoke eat like pork belly. They’re also ultra-tender, which Pinkerton says is his preference. “How I cook here is exactly how I cook in my backyard,” he told me. “I like my ribs more tender.” 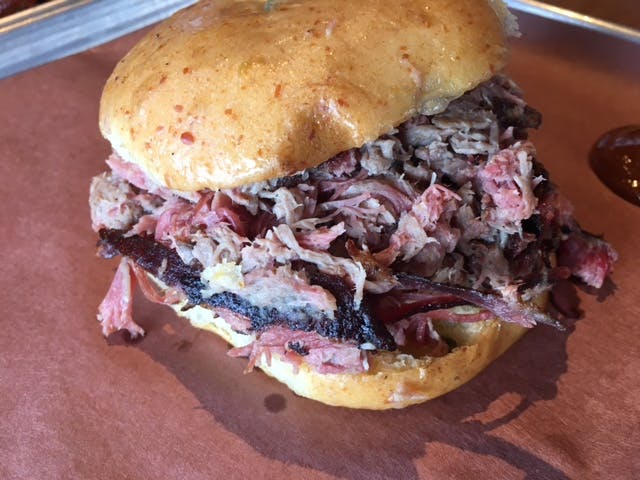 Pulled pork was tender as well, but to the point of mushiness. Even with a spritz of vinegar sauce, the  jalapeño cheese bun it sat between was more flavorful. Take the suggested topping of slaw, which is crisp and pleasantly lemony. There are four other sides to choose from, which are ordered along with desserts in line just prior to the cutting board. Mustard potato salad and meaty pinto beans are other classic options. The jalapeño cheese rice provides a unique touch, but, sadly it doesn’t taste much like jalapeño. Or cheese. All of them will set you back $3.50 apiece. 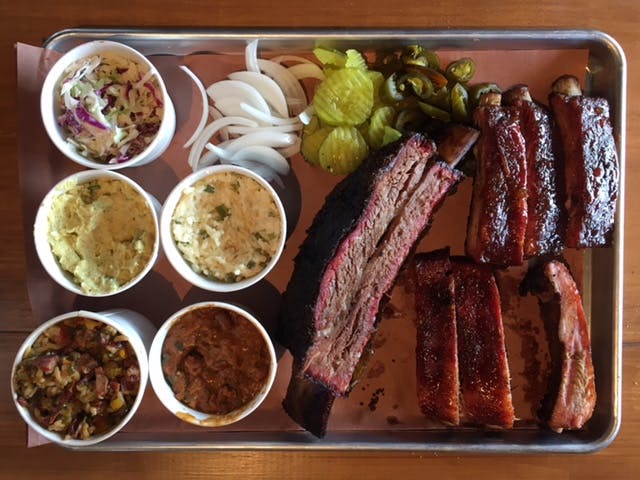 For a more decadent (and expensive) side, you can pick up a pint—the smallest serving—of duck and sausage jambalaya for $10. It’s a savory amalgam of still-crunchy vegetables, meat, rice, and fat. Lots of fat. I enjoyed the smokiness and the bold flavors, but a few bites were enough. I can’t imagine eating a whole pint of it given its richness. Besides, for a couple bucks less you can get a half pound of the juicy smoked sausage by itself. The smoked chicken is the only meat I didn’t get to try. The first customer of the day bought every half chicken they had, but Pinkerton stressed that they usually have barbecue to sell beyond seven in the evening. 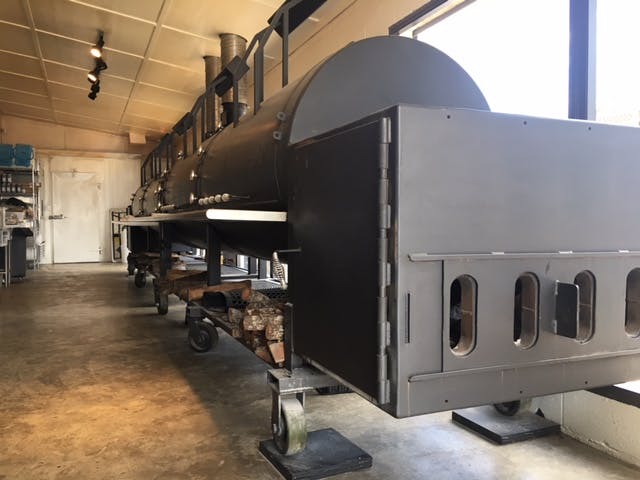 Pinkerton’s is only two months in, and he’s got the energy and dedication to make this one of the best joints in town. He even lives upstairs, and joked, “When you come here, you’re coming to my house for lunch or dinner.” That makes it hard for him to find much separation between work and life, especially after his first two night guys left the job, one of them mid-shift. Luckily, Pinkerton found Jose Pacheco. Pacheco had struggled to find work—he’s on dialysis three times a week, and sleeps during the day. The night shift at Pinkerton’s, during which he watches over the two massive Klose smokers in the new pit room, has turned out to be a great fit. From what I ate, Pacheco and Pinkerton make a great team.