Pioneer BBQ has been around a while in the middle of Nixon, a town about an hour southeast of San Antonio. It was operated by the Chambers Brothers out of Luling, then a family of Jehovah’s Witnesses who eventually put the business up for sale on Craigslist. That’s where Shawn Collins found it when he was shopping for cooking wood from his apartment in Brooklyn. He bought it.

Shawn’s fiancé Amy Powell is from the Houston area, so it was a bit of a homecoming for her, but life in a town of about 2,500 is a sharp shift for the couple who most recently lived in the popular Williamsburg neighborhood of Brooklyn. Collins said the transition hasn’t been a hard as one might think. “I get to talk to people all day about wood, cows, hunting, and sausage. It’s pretty awesome, especially after being in a place that’s not so personal for so long.” I then joked with him that they might be the first Williamsburg couple to move to Texas, but not to Austin. Their apartment was just down the street from Delaney Barbecue, one of the joints responsible for New York’s growing barbecue scene, and Collins worked as the chef at a southern/barbecue restaurant in the East Village called Georgia’s East Side BBQ. It’s the kind of joint where the brisket special is served with a shitake demi-glace; not exactly what they’re looking for in South Texas. 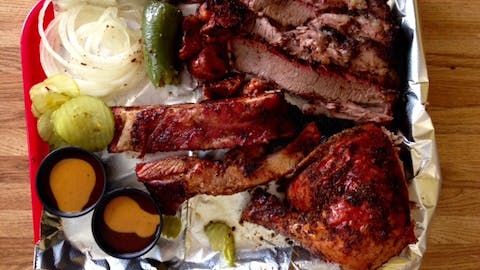 Their new version of brisket is a good one. There’s a heavy rub with a wallop of garlic powder and a gentle smoke. On the day I visited they were using their back-up offset smoker while Shawn was welding a new firebox onto their main pit. Even in the back-up pit the brisket was tender, a bit overcooked really, but that’s always preferable to underdone. They really just opened last June, so it was a solid effort from an owner who admits “We’re a work in progress.”

Collins is a native of St. Louis, so he’s a big fan of ribs. He smokes behemoth pork spare ribs which looked great, but the final step borrowed from the previous owners is an odd one. Collins squirts a pool of barbecue sauce onto the flat top. As it spits and bubbles he puts the ribs into the sauce, cut side down. The edges of the ribs then get some of the sugary sauce seared into either side. It’s an extra layer of flavor, but it also makes the ribs too hot to touch, and provides no options for a sauceless rib. Sausage is pre-sliced and treated the same way on the grill. Some of my slices spent too much time in the hot barbecue sauce and got burnt surfaces. It seems like a process that one would got through if the ribs and sausage were coming straight from the fridge, but these meats are held hot as they should be and would have probably been better without the extra step. 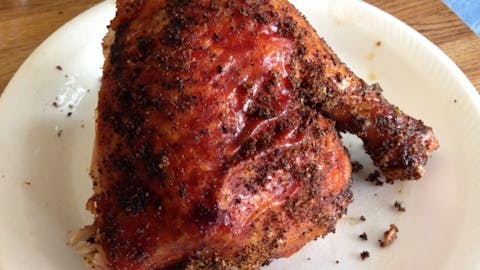 The smoked chicken quarter was a big one, and had a beautiful red hue. It’s the one item that gets cooked in their small Southern Pride smoker, and it gets a heavy layer of seasoning. The meat was juicy and the skin was crisp. You don’t need much more in a piece of smoked chicken. 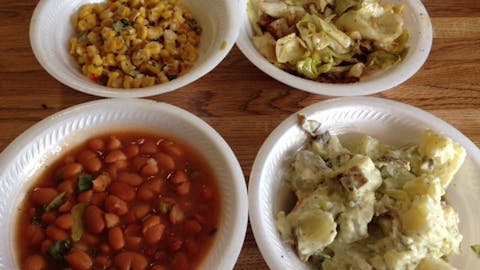 Collins found his niche in New York doing southern food, but he also spent a stint at the ultra fancy Blue Hill in update New York. He said his time their is responsible for the joy he gets in making his own sides. There aren’t any canned items here. He’s even growing some of his own vegetables in a garden at his house a couple blocks away. A chunky potato salad was a classic and the cabbage cooked down with pork made it easy to eat something green. The beans couldn’t figure out if they wanted to be spicy or sweet, but there was no doubting the direction of the creamed corn. With the addition of poblanos and jalapeños it had a good kick with just enough cream to deaden the sting a bit. It was a stunner.

Another great dish was the banana pudding. It was a simple vanilla pudding base with lots of banana chunks and a few crispy Nilla wafers. If I’d eaten it a few months back it would have made my list of the best banana puddings in the state. On my next trip I’ll have to try the smoked peach cobbler which wasn’t available on this visit. 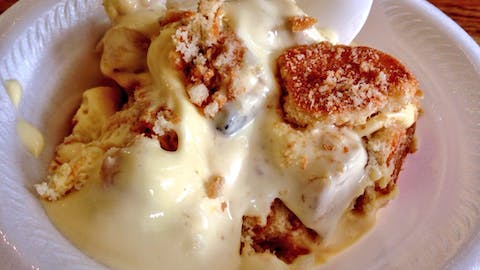 If you think Collins and Powell are getting burnt out on barbecue, I don’t see that coming anytime soon. They’ll be getting married in Houston in September. The event will be catered by Gatlin’s BBQ, a business they see as an inspiration. “They started pretty recently in the grand scheme of things. It’s still a small operation,” but they’ve still managed to make a mark in Texas barbecue.

They’re still trying to make their mark at Pioneer BBQ, but the nearby residents have been very supportive. The customers just come in bunches instead of a steady stream. Collins told me as a I left, “We feel like we’re on to something good, but if we could just get someone to notice us down here it would change everything.”