Israel “Pody” Campos needed a new direction in life. He had been training police recruits in Austin before being laid off. He then decided to move back home to Pecos, buy a laundromat, and convert it into a barbecue joint. Open for just six months, Pody’s is an impressive addition to the barbecue desert of far West Texas. 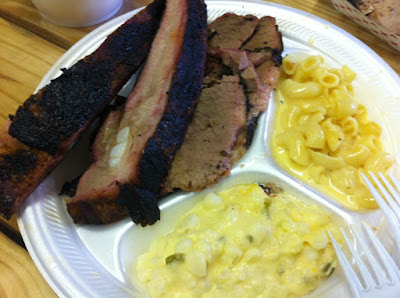 Simple sides be damned, Pody offers a green chile cheddar pozole with a real West Texas identity. A thin sauce mac & cheese falls flat, but the spicy barbecue sauce brings everything right back home. Some spicy sauces are just an original version with a bit of cayenne or hot sauce added. This one is a unique recipe with honest-to-God chunks of habanero, seeds and all. Be sure to order a large tea if you’re brave enough for the sauce. 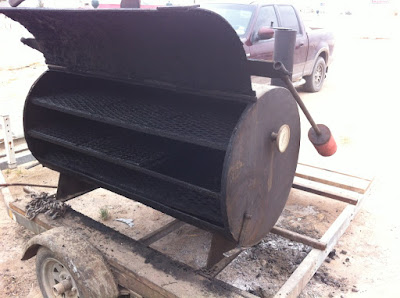 The meats are also impressive. In this region it’s odd to find any wood other than mesquite, but Pody fires up the smoker above with cherry wood and pecan for his ribs. They are thick and meaty spare ribs with a jet black bark and a black pepper bite. They were a bit dry, but had soaked up plenty of smoke. I’m sure they’re at their peak around lunch time rather than at this late afternoon snack time. We skipped the sausage since it was billed as Black Oak sausage on the menu. I rarely see someone bragging about using cheap Hillshire Farms sausage, but I was glad for the warning. 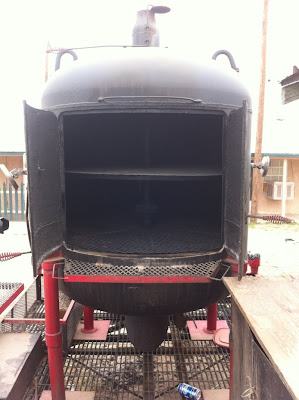 A mix of mesquite and oak provide the heat and smoke for the briskets which are done in an odd looking cylinder smoker with a lazy-susan style set of racks. Smoke is provided via a remote fire box and a steel duct into the bottom of the smoker. It’s a design I hadn’t seen before, but it certainly does the trick. Thick-cut brisket was a bit mushy from being wrapped for several hours, but the fat was perfectly rendered with a great smoky crust. Maybe this Austin boy can show these West Texans how to smoke some meat. From what we saw there isn’t much competition for a hundred or so miles.